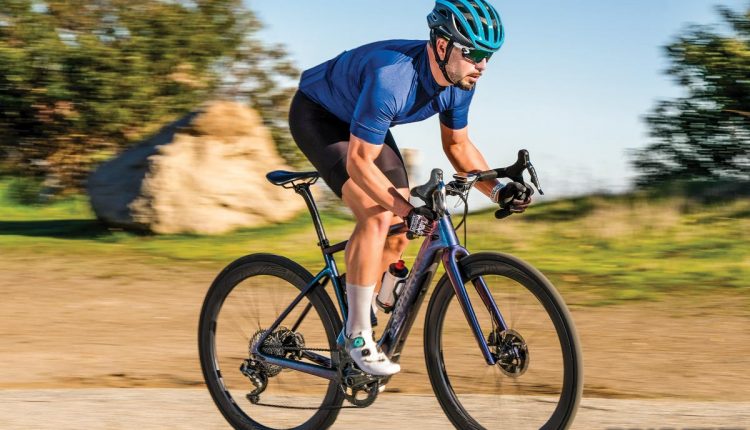 If ever there was a category of road bikes that exemplify a then-and-now existence, it would be the ever-expanding market of e-road bikes. During its more formative years (starting about eight years ago), the bike industry was giving its full attention to developing both commuter and mountain bikes.

However, during the more recent crush of worldwide acceptance of the pedal-assist breed, the continued evolution of battery and motor technology has combined with e-specific frame designs so that e-road has finally begun making headway into a growing number of catalogs.

• No different from the type of animosity that many gravel enthusiasts encountered for being something other than a true roadie, so, too, have e-bike riders felt similar moments of ridicule. It didn’t help that some of the early e-road bikes literally shouted, “Look at me, I’m an e-bike,” owing to their humpback-like, downtube-mounted batteries that signaled their added pedal power to one and all.

Fortunately, the level of obviousness has been replaced with newfound subterfuge, thanks to the evolution of new battery and motor technology that, combined with accommodating frame designs, has all but made the “e” in any e-bike much harder to notice. Of course, in the small minds of some drop-bar critics, e-bike riders now face accusatory claims of trying to “hide” their power assist. Silly.

• Of course, of all the accusations made against e-bike riders, the most shallow and mis guided is that they are “cheaters” for relying on a battery-assist pedal stroke. Let’s all take a moment and remember that (outside of doping) there is no official rule book that defines who and what is a “real” roadie and who or what is a “cheater.”

• As it currently stands, there are two classes of e-bike motors that are based on their top speed. Class 1 powerplants are where it all began, and they tap out at 20 mph. Bianchi was the first mainstream brand to introduce a Class 1 bike with their e-Aria that was powered by a rear hub motor.

These Class 1 bikes (best represented by Fazua and Ebikemotion powerplants), with little drag and not a lot of added weight, proved a suitable choice for casual cyclists in need of just a little extra assist, but they fell well short for more performance-oriented cyclists capable of maintaining faster speeds.

• However, if some of you are scratching your head thinking about how easily a road bike can reach 20 mph and how difficult it would it be to pedal a much heavier bike at normal road bike speeds without any assist, well, you’re not alone!

• And that’s why, based on that power-to-weight-to speed dilemma, the bike industry has responded with new models powered by Class 3 motors (with up to 625-Wh batteries) that have a much more realistic and group-ride-friendly top speed of 28 mph. The difference in ride experience is huge.

• You can expect most e-bikes to weigh in between 25–40 pounds depending on frame material and battery size. Lithium-ion batteries are the industry standard, and many can be detached from the bike for more convenient charging. Some high-end models also offer a handy app-based interface that can add to the user experience.

• Most Class 1 and 3 motors have between three to four different power modes, and key to both is the amount of range they offer. Typically, you can expect the range claims made by the manufacturers to be on the optimistic side, but the equation is a simple one—the more power you use, the quicker the battery gets used up. And, varying conditions like rider weight, headwinds and climbing can all play into how much power you choose to use.

• Without a doubt the greatest development in the e-road market has been the integrated battery, which has slimmed the bikes’ profile and returned them to a more traditional road bike look and feel.

• Just as the boon in gravel bikes has moved the needle in terms of new bike sales, so, too, have e-bikes. In short, every bike brand has one, so it’s safe to assume that no matter your favorite non-assist bike brand, they will likely have an e-bike in their catalog.

• And last, for anyone who says they don’t need an e-bike because it’s “cheating”, just remind them that if they are looking for a truly hard workout then they should take an e-bike out on their normal training route and ride with the power off—talk about strength training!

And as dismissive as some of our friends were about e-road bikes, they weren’t complaining when they were able to get an improved workout by being able to sitting on our rear wheel getting motor-paced around the local foothills! Of course, the true value of riding an e-bike is not just the extra speed they provide, but also the chance for many to get in a longer ride—something we should all look forward to enjoying. Keep an open mind! 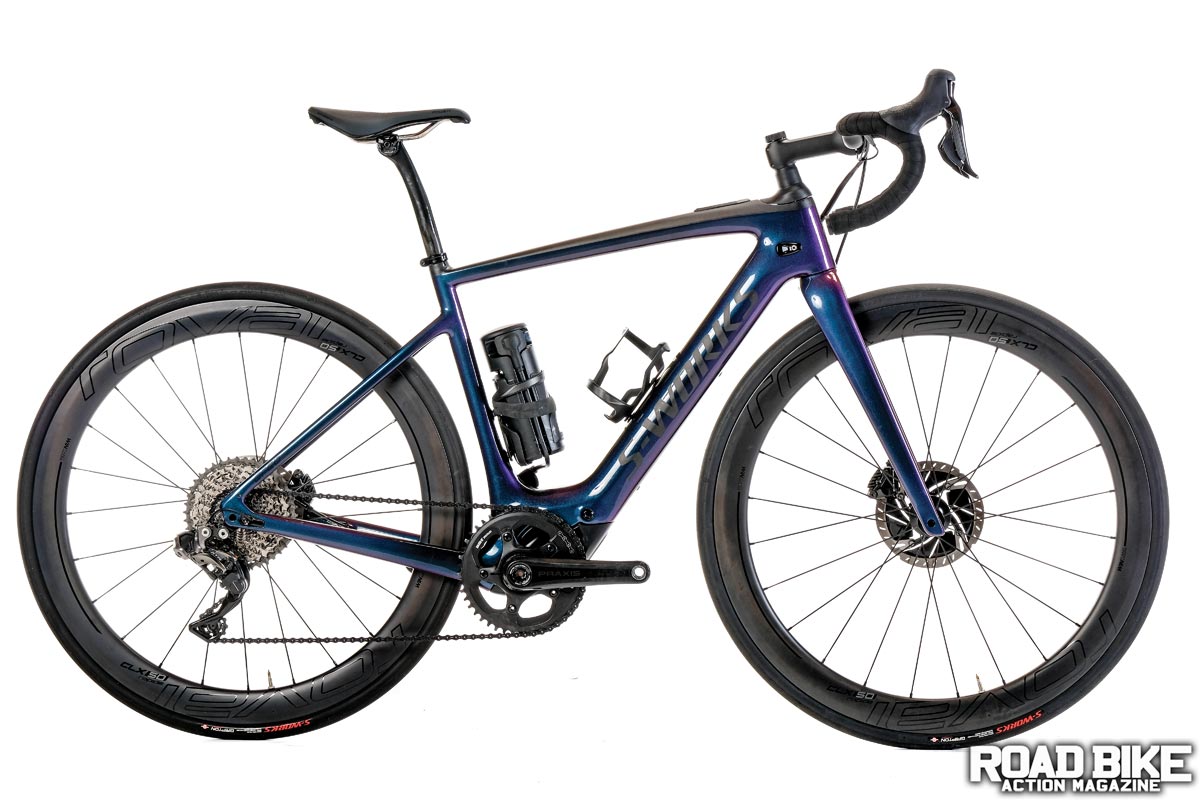 The S-Works is the fanciest of Specialized’s e-road bikes, but we remain bigger fans of the Comp model at half the price with the same frame and proprietary Class 3 motor. Weighing just under 30 pounds, even without the auxiliary battery, the Creo has great range. 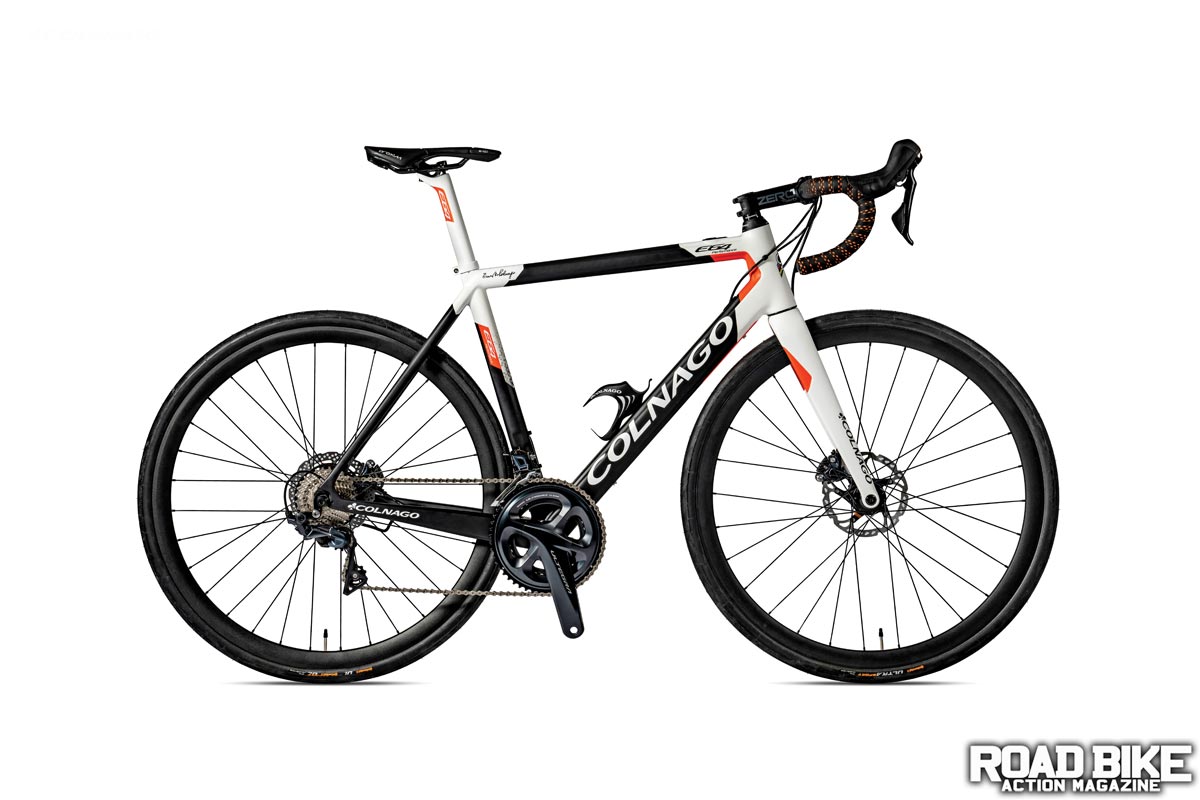 If there was ever one bike brand that traditional roadies thought would never succumb to power assist, it would be Colnago. Luckily, the most revered name brand in the industry jumped in with the carbon E64 that, coupled with a Class 1 Ebikemotion rear hub motor and Shimano Ultegra drivetrain, brings some added class to the group ride. 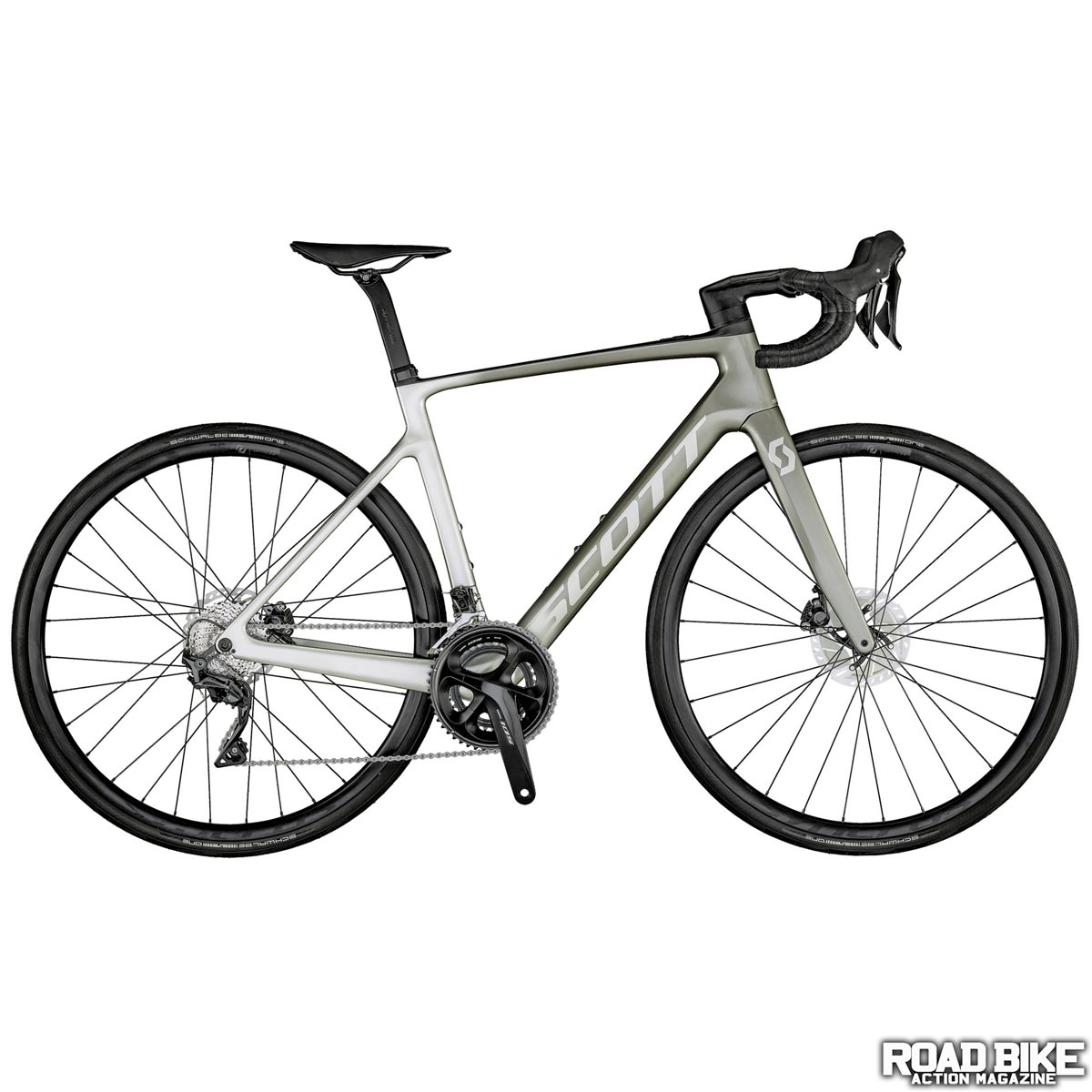 Powered by a 40 N/m torque, 460-Wh Mahle rear-hub motor, the carbon Addict borrows its name from Scott’s famous (non-assist) climbing bike and is the entry-level model in the new four e-bike family. The eRide 20 is spec’d with a combo of Shimano Ultegra and 105 components and rolls on a pair of Syncros wheels that are Scott’s in house brand. Available in five sizes. 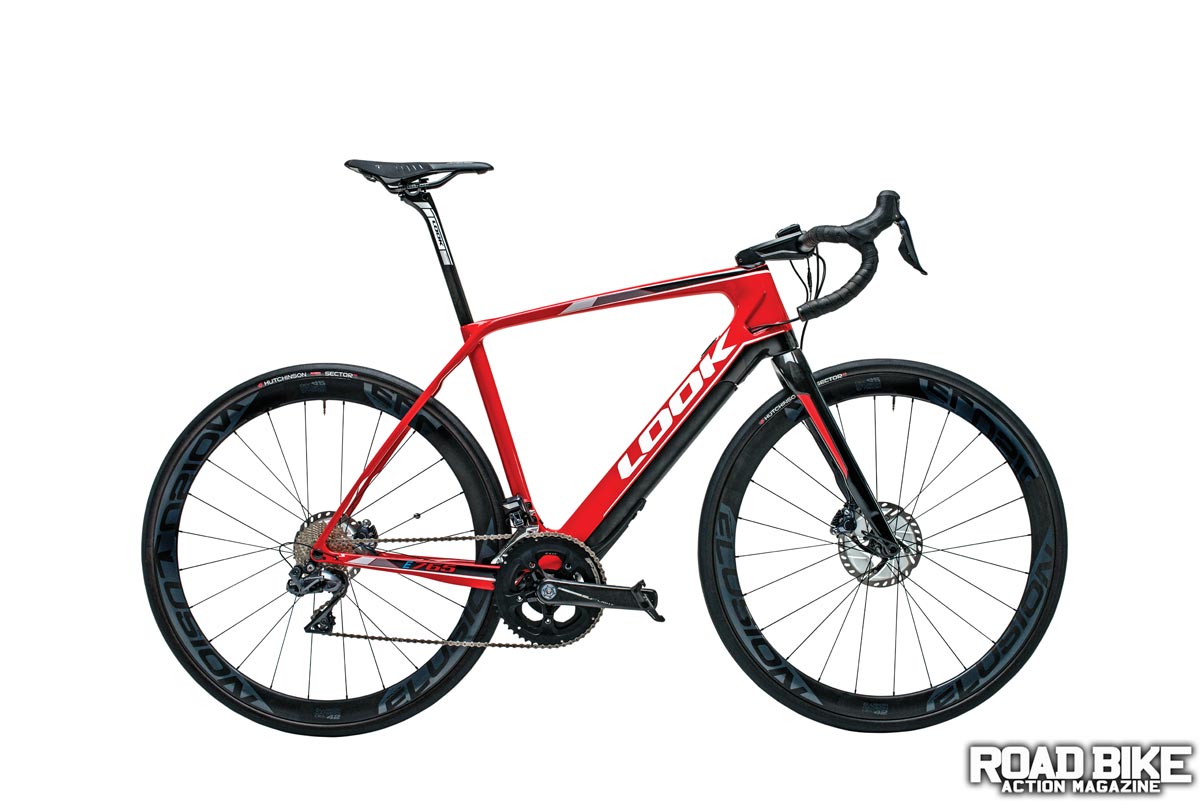 The legacy French brand offers both road and gravel versions that use a Fazua Evation motor (to enhance ride feel the E-765 is updated with Look’s Black Pepper spec software). The high-end Optimum model runs with an electronic Shimano Di2 Ultegra drivetrain. Available in five sizes. 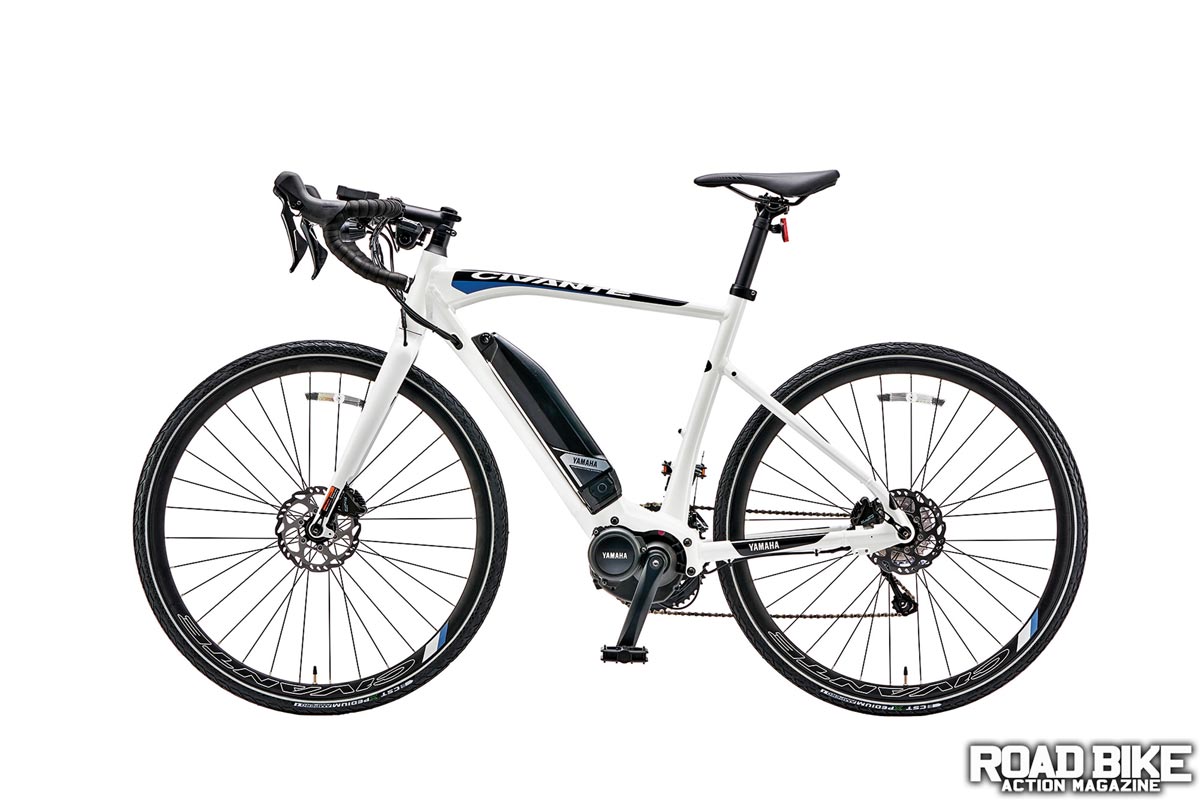 This is the famous moto brand’s Class 3 road bike at an entry-level price that starts with an aluminum frame and a 500-Wh battery that can recharge from 0 to 80 percent in just an hour. The integrated headlight is a nice
safety touch. 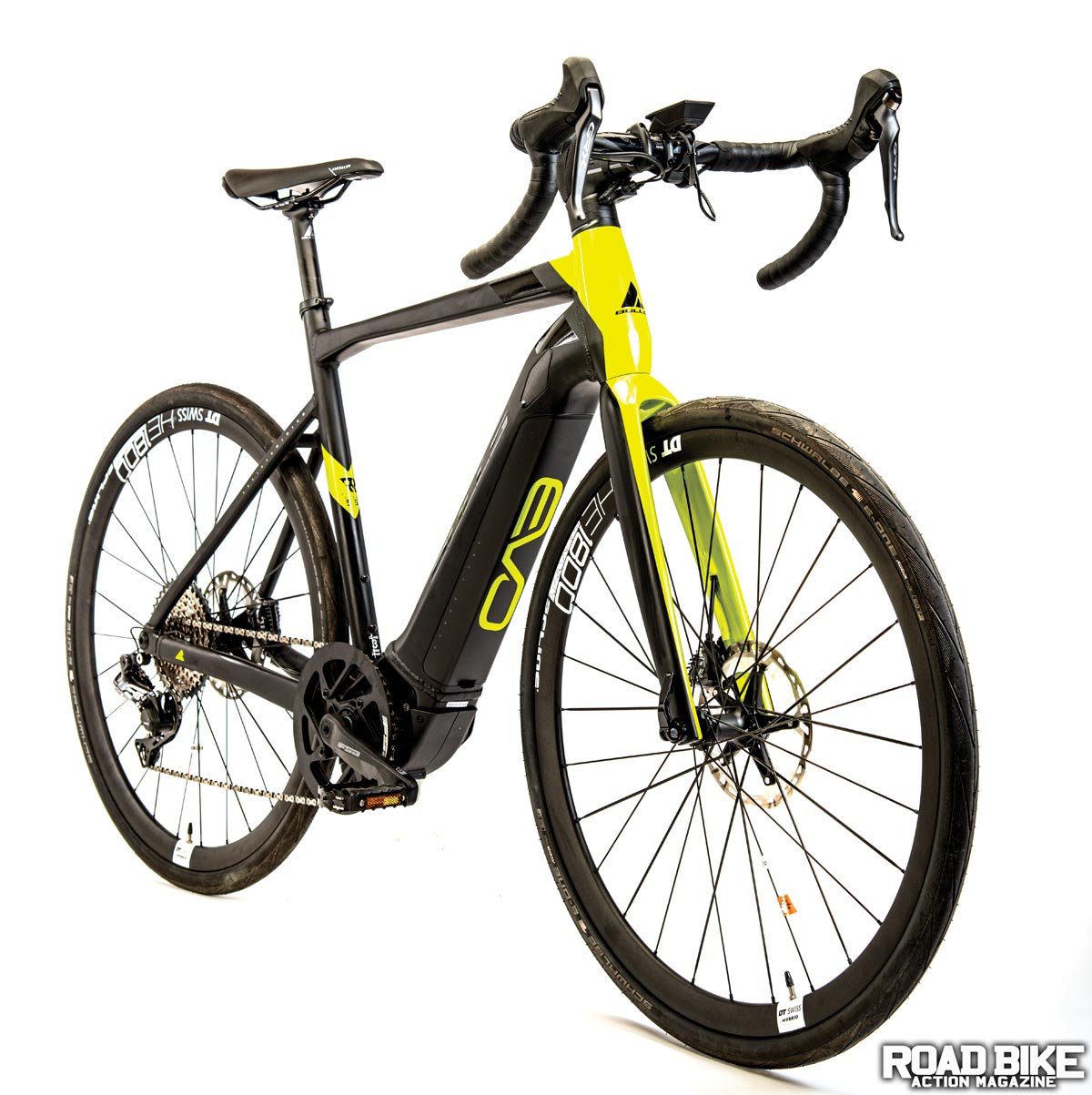 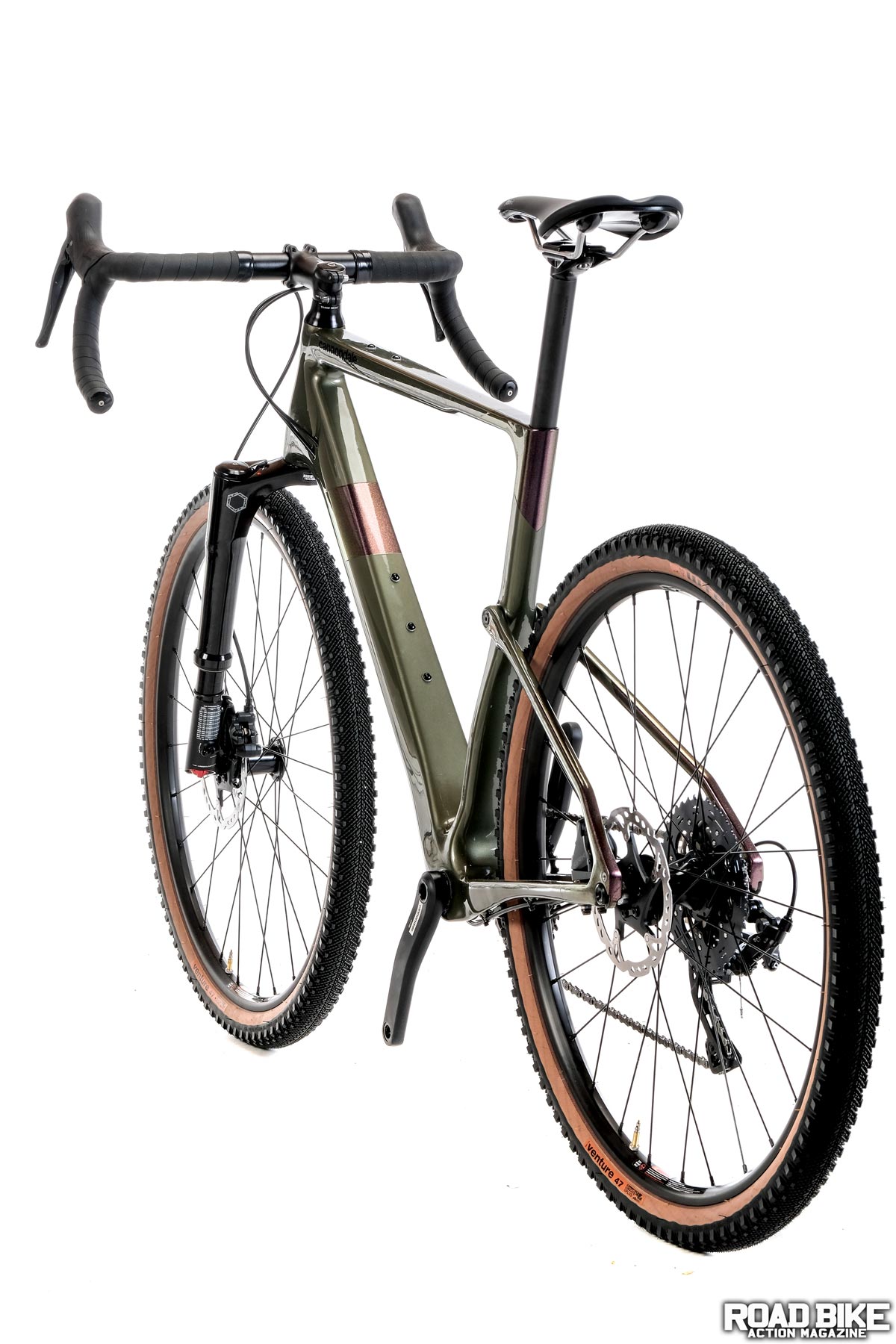 If gravel is your game, Cannondale’s Topstone Lefty Neo could be the bike for you, with its Bosch Gen 4 power, carbon frame and unique Lefty suspension fork that offers 30mm of travel. Cannondale also has two higher-end models available.