Calella, Spain, March 20, 2017 (AFP) – Italy’s Davide Cimolai won a bunch sprint to bag the first stage and the overall lead at the Tour of Catalunya on Monday after overtaking France’s Nacer Bouhanni right on the line. This was the first of seven stages of what promises to be a hotly disputed race featuring most of cycling’s big guns such as Britain’s three-time Tour of France winner Chris Froome, defending champion Nairo Quintana of Colombia and Spanish veteran Alberto Contador, winner of all three Grand Tours, as well as locally-based Irish rider Dan Martin.

Team Sky are racing with Geraint Thomas as the lead man with teammate Froome short of peak form. The peloton raced 178.9km over a middle section containing hilly terrain on the rocky and rugged Costa Brava, but it arrived intact at the finish line at the Calella coastal resort. Cimolai, 27 and riding for FDJ,  proved fastest in a tight finish on narrow streets coming up a slight hill at the end to just edge Bouhanni, who made an early bid. Kristian Sbaragli completed the opening day’s podium.

There are potentially two more bunch sprints but Tuesday’s race is a tricky 41.3km team time trial and Thursday’s climb stage and probable decider is a summit finish at La Porta. 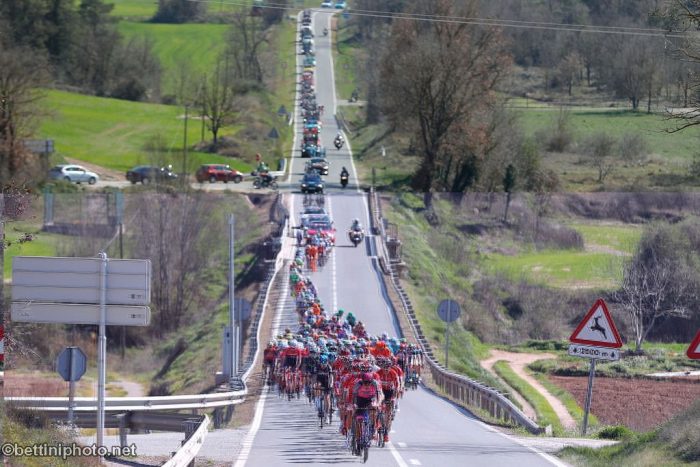