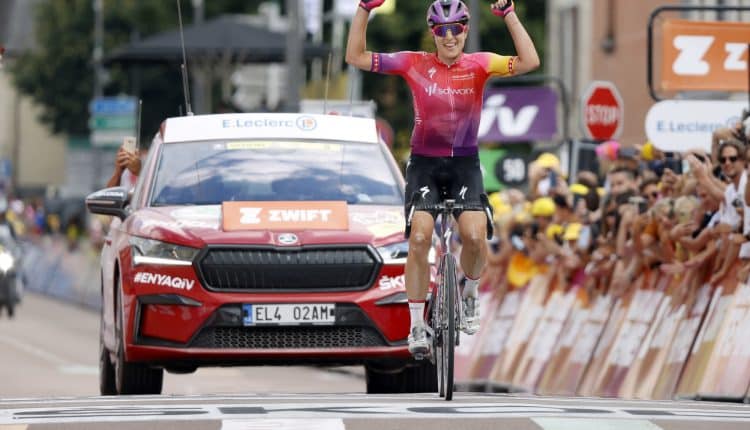 “I think here in this Tour every day is hard, at least for me,” former doctor Reusser told Eurosport.

“This stage suited the kind of rider I am with these gravel sections.

“The team had a plan to do a hard race and not let it come down to an easy finale. We just said attack and one would go. I was lucky it was me,” she added.

The 35-year-old Vos, who took over the yellow jersey with victory in stage two on Monday keeps a 16sec advantage over her closest rivals in Italian Silvia Persico and Pole Katarzyna Niewiadoma.

Spanish veteran Mavi Garcia lost more than 1min 30sec in the general standings after issues on the uneven surface which included crashing with a team car as riders suffered numerous punctures but Vos and her fellow Jumbo-Visma riders survived unscathed.

“We spent a lot of energy to stay in front and you had to really fight for a position before the gravel sections and the climbs as well,” Vos told reporters.

“We weren’t very concerned, we had to stay in front and stay out of trouble. We did, so I’m happy about that,” she added.

This is the longest edition of the women’s Tour, after Amaury Sports Organisation, who run the men’s race, started with a one-stage event in 2014.

During the dust-filled gravel sections, which passed through the world-renowned vineyards in eastern France, the likes of Tuesday’s stage winner Cecilie Uttrup Ludwig and yellow jersey contender Niewiadoma suffered punctures before rejoining the peloton.

With 9 miles to go, Reusser, European road time-trial champion, made an attack from a big leading bunch as the riders returned to normal roads. Niewiadoma’s Canyon-SRAM team-mate Amialiusik, racing as a neutral rider after Russia’s invasion of Ukraine earlier this year, then followed the Swiss as the group broke up. Frenchwoman Muzic, aged just 23, completed the breakaway. Reusser claimed the three-second bonus atop Cote des Bergers with less than 6 miles to go and was first over the final climb of the day on Cote du Val Perdu, with 3 miles left. She dominated the closing stages and pointed at her team name on her dust-covered jersey then held her arms wide open as she crossed the finish line in Bar-sur-Aube.