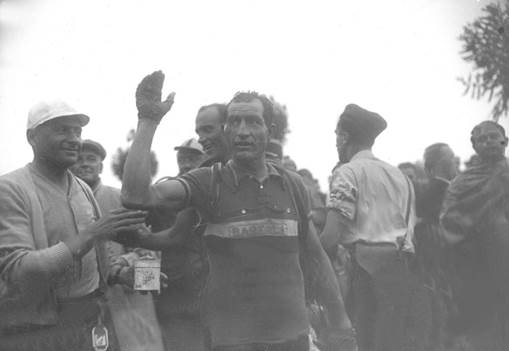 At the turn of each decade, the  Tour de France has gone through organizational changes and backstage struggles that have variously turned out to be decisive or utterly inconsequential. The journey back in time proposed by letour.fr continues in 1950, marked by the collective departure of the Italian riders after incidents that resulted in Gino Bartali being threatened and assaulted by French spectators in the Pyrenees. Between the resurgence of the old internal squabbles within the “Squadra” and the diplomatic consequences of the Col d’Aspin affair, the 1950 Tour extended well beyond the roads of France.

A quarrel between neighboring countries on the Tour de France is both simple and, at the same time, much more complex than an anecdotal overzealousness and wine in the ranks of the supporters of both sides. In 1950, traces of World War II remained and the memory of the Mussolini regime’s collaboration with Nazi Germany was still fresh. On the political front, there was a genuine desire to reintegrate Italy into the community of nations on both sides of the Alps, but progress was slow and sport had its place in this process.

In the world of cycling, the Italian federation (UVI) was not readmitted into the UCI until 1947. In concert with the authorities, the organizers worked to bring consistency to the peloton and to provoke a maximum number of encounters between the champions of the two countries, for example with the creation of the Desgrange-Colombo Challenge, in tribute to the founders of the Tour de France and the Giro d’Italia. As a symbol of the newfound friendship, the city of Sanremo hosted a stage finish on the 1948 Tour, where Gino Sciardis won ahead of Urbain Caffi… two French riders of Italian origin!

The understood interest of the two organizing newspapers, L’Equipe and La Gazzetta was to ensure that their races had the highest possible density, coexisting with the chauvinistic fiber that also sold newspapers. But this approach tended to heat up controversy and in the 1949 Tour, the French riders were copiously insulted, pushed and targeted by stone-throwing Italian supporters during the stage leading to Aosta.

After the domination of Bartali and Coppi in the two previous editions, and a minimalist strategy that hardly made Italian riders popular in France, the 1950 Tour began in a climate of hostility towards them. Heralded as the rider to beat when Coppi was unable to ride, Gino Bartali felt threatened from the very first days, when the Italians won three of the first five stages. In the time trial in Brittany, he narrowly avoided falling after a spectator threw a stick into his wheels, but his team manager, Alfredo Binda effectively negotiated with the Italian journalists present not to worsen the situation. Gino himself declared in La Gazzetta on the eve of the Pyrenees that “it is better not to win”, just to ease tensions.

Jacques Goddet paid a visit to the Hotel de France in Loures-Barousse. The boss decided to meet the Italian delegation and convince Bartali to stay in the race. But his arguments didn’t change a thing. The leader of the “Squadra” felt he was in danger.

The fears of the two-time winner were well-founded and the atmosphere grew increasingly tense in the Pau-Saint-Gaudens stage. On the Col d’Aspin climb, the pressure of the crowd sent both Robic and Bartali off their bikes, then the situation degenerated. Accounts of this scene of confusion varied greatly, but the limits of simple intimidation were largely exceeded and there were certainly punches thrown. In any case, Bartali, enraged, managed to get back to the leaders of the race and won the sprint in Saint-Gaudens, while his young team-mate Fiorenzo Magni claimed the Yellow Jersey, and immediately afterwards decided to leave the Tour where he felt in danger.

That night, Jacques Goddet paid a visit to the Hotel de France in Loures-Barousse. The boss decided to meet the Italian delegation and convince Bartali to stay in the race. But his arguments (including financial ones, according to some…) didn’t change a thing. The leader of the “Squadra” felt he was in danger and explained himself diplomatically in L’Equipe: “In many circumstances, I’ve been wonderfully welcomed in your country. But I think it only takes one crazy person for a disaster to happen. And that’s the madman I’m afraid of. Please understand, I have children and a family. Why take such risks? No, it’s for Italy that I’ll leave tomorrow”.

In fact, opinions were divided in the Italian camp. Fiorenzo Magni, who led the general classification, could legitimately believe in his chances of going for the greatest victory of his career. Bartali did not like this, partly because of Magni’s militia past. Alfredo Binda, who coached the team, rather thought about the need to maintain friendly relations with the French, but finally agreed with Bartali’s position and assumed the group withdrawal of the two Italian teams, taking the “Cadetti” with him.

The situation helped Ferdi Kübler, the new rider in the Yellow Jersey, but more than anything else caused a lot of upheaval. Very soon after the departure of the Italians, it was decided to cancel the arrival in Sanremo scheduled four days later for fear of reprisals from the tifosi. In the rush, Goddet and his services took on the logistical challenge of preparing a fallback arrival in Menton, with more than 1000 people to house and feed.

Practical considerations were quickly relegated to the back burner, as the Aspin affair entered the judicial arena with the opening of an investigation, and political considerations as soon as the stability of Franco-Italian relations was compromised. The diplomats of both countries were much less heated than their respective supporters and tried to calm things down. The Minister for Foreign Affairs, Robert Schuman, first of all hastened to send a message to the Italian ambassador, expressing his “deep regret at the incidents of which the Italian riders were victims”.

The issue also came up in parliamentary debates in both countries, with Edouard Bonnefous, the Chairman of the Foreign Affairs Committee, solemnly declaring that “the Italians are friends who came to our country to demonstrate their class, not to be insulted. We cannot allow a handful of scoundrels to jeopardise good relations between the two countries”. In the same spirit of appeasement, the Italian Ambassador in Paris replied that “the regret expressed by the French Minister for Foreign Affairs served as a reminder that such incidents could never disrupt the friendly relations between the two governments and the two peoples, whose collaboration will increasingly develop in all areas”.

As far as cycling was concerned, the presidents of the two federations, Adriano Rodoni and Achille Joinard, met in the second week of August with the Tour de France organizers to talk about the future. The Italian riders would definitely come to the 1951 Tour de France.