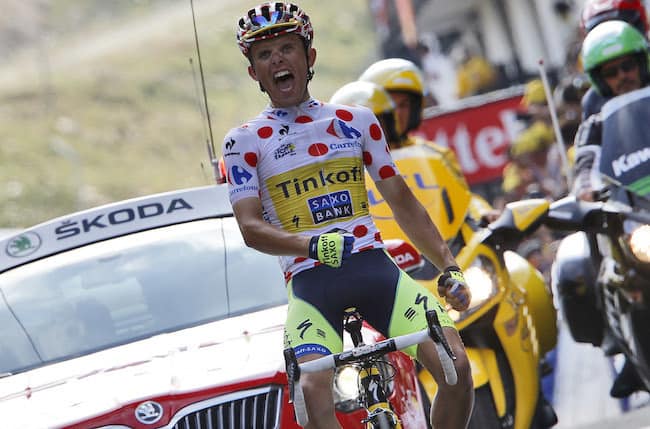 Share
Tinkoff-Saxo’s Rafal Majka won his second stage of this year’s Toue de France on Wednesday’s Stage 17, extending his lead in the race for the King of the Mountains polka-dot competition. (Photo: Bettini)

Young Pole Rafal Majka climbed to his second mountain stage victory of the Tour de France on Wednesday. Having already triumphed in the Alps, the Tinkoff-Saxo rider added a Pyrenean stage to his ledger with victory on the 124.5km 17th stage from Saint-Gaudens to Saint-Lary. Italian Giovanni Visconti was second at 29sec with race leader Vincenzo Nibali taking third at 46sec as he extended his overall advantage to Spaniard Alejandro Valverde to 5min 26sec. The battle for a podium place also took another twist as veteran Jean-Christophe Peraud rolled over the line fourth in the same time as Nibali and closed to just 8sec behind Thibaut Pinot, who retained third overall, but is now exactly six minutes behind the Italian leader. Majka’s victory was his second in five days and Tinkoff-Saxo’s third in the last four stages.

The 24-year-old Pole had already triumphed Saturday at the Risoul ski station in the Alps while Australian Michael Rogers won Tuesday’s first Pyrenean stage in Bagneres-de-Luchon. It means the Russian-owned team has gone some way to making up for the loss of leader Alberto Contador to a broken shinbone on Bastille Day. Majka was part of a large breakaway group that arrived on the final of four tough categorised climbs with 14 riders. Visconti made a break for home but once Majka set off after him he looked clearly the stronger. And so it proved as he accelerated away in the final 2km, also doing enough to retain the polka-dot king of the mountains jersey that he had taken off Joaquim Rodriguez on Tuesday.