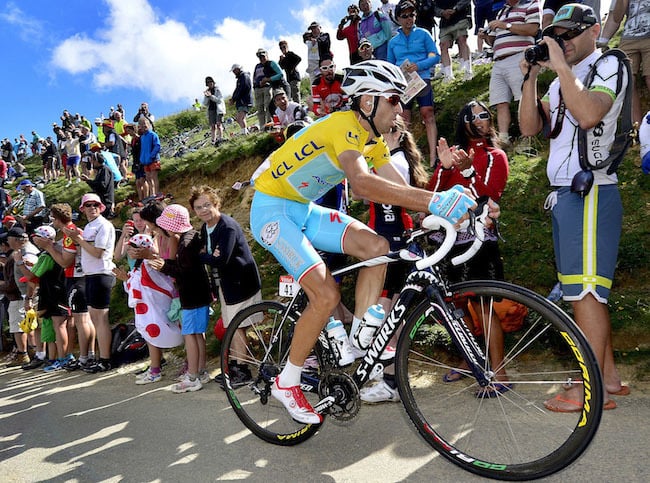 Share
Vincenzo Nibali stamped his authority as overall leader at the Tour de France with a solo victory on Thursday’s Stage 18 with a summit finish atop the Hautacam. (Photo: Bettini)

Vincenzo Nibali confirmed his supremacy at the Tour de France with his fourth stage victory on Thursday. The 29-year-old Italian won the 18th stage from Pau to the top of the Hautacam climb after 144.5km of mountainous terrain in the Pyrenees. In doing so the Astana rider increased his overall lead to 7min 10sec ahead of Frenchman Thibaut Pinot, who was second on the stage at 1:10. Pole Rafal Majka, the winner of two mountain stages, was third at 1:12 to secure victory in the King of the Mountains competition. Jean-Christophe Peraud made it two Frenchmen on the podium as he came home fourth at 1:15. The 37-year-old is just 13sec behind Pinot and 2sec ahead of Alejandro Valverde, who had started the day second. It means three riders are separated by just 15sec in the battle for second place, which should be decided on Saturday in the 54km time trial. Although Pinot, 24, is second, he is widely regarded as the weakest of the three against the clock.

American Tejay Van Garderen came home fifth in the same time as Peraud to boost his chances of finishing in the top five overall. He is sixth and trails 23-year-old Frenchman Romain Bardet by just over two minutes but the American is a far better time-trialist. Yet Thursday’s stage was all about Nibali’s total domination as once again he gave a demonstration in the mountains. When he made his attack with 10km of climbing ahead he ate into loan leader Mikel Nieve’s advantage in no time and then simply rode away, gradually and steadily increasing the gap with every kilometer.