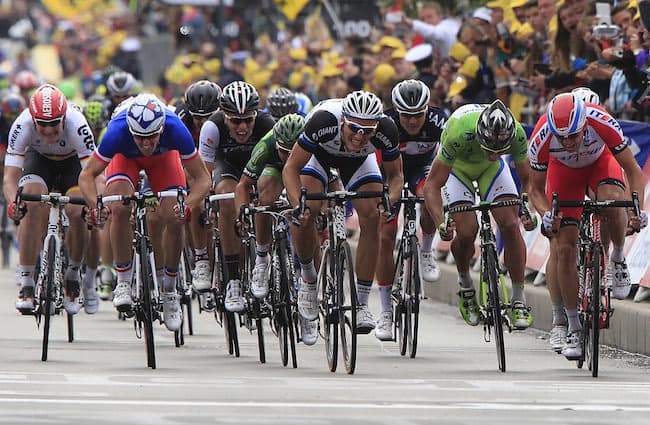 Marcel Kittel continued his incredible domination of the sprint finishes by claiming his third stage out of four at the Tour de France on Tuesday. But there was a scare for defending champion Chris Froome who crashed early on and injured his left wrist. There were no such worries for Vincenzo Nibali, though, who retained his race leader’s yellow jersey. Following victories in the first and third stages in England on Saturday and Monday, Kittel just edged out Norway’s Alexander Kristoff on the 163.5km fourth stage from Le Touquet to Lille. Despite also winning four stages last year, the 26-year-old said he was surpassing his own expectations.

‘Before the race I said my goal was to win one stage. I said last year it was unique to win four stages and wear the yellow jersey yet again. It’s a little similar this year. It’s very unique and not something you can expect every time. I’m very happy it’s working so well.” Kittel’s next aim is to watch a German victory as his country take on hosts Brazil in the World Cup semi-finals later Tuesday. “It’s pretty late here, I hope it’s OK to watch it and have still enough sleep for the next stage but normally we will watch it all together,” he said. Kristoff thumped his handlebars in frustration as he crossed the line, just half a wheel behind the burly German, whose power over the last 100 meters made the difference.

But with former world champion Mark Cavendish, a 25-time stage winner on the Tour, out of this year’s race with a separated shoulder, the question is: who can stop Kittel? Unlike on Saturday and Monday’s stages, his Giant-Shimano team failed to control the run-in to the finish but still Kittel found himself in the right place to strike at the finish and his greater power did the rest. Elsewhere, the major news of the day was the crash that saw Froome hit the deck. He will undergo an X-ray later Tuesday as a precaution, his Sky team manager Dave Brailsford said. “He fell, it’s clear to see, but his injuries are quite superficial,” said Brailsford. “He felt well at the end but we’ll still take him for an X-ray to ensure he’s not got anything. I hope he’s fine.” He suffered grazing to his left thigh and elbow but it was his wrist that seemed to bother him most. After a trip to the medical car, he came back with a splint on his left wrist and bandaging on his left thigh and right hand. But sporting director Nicolas Portal played down any concerns, saying the splint was simply a precaution. “We were very scared, as was everyone,” said Portal. “I spoke to him, he seems OK. He must have fallen hard, I imagine, but it’s OK.”

The other major news was the abandonment of former winner Andy Schleck with a knee injury. The 29-year-old Luxembourger fell around 30km from the end of Monday’s third stage but pulled out before the start of the fourth stage after tests showed he had damaged ligaments and the meniscus. His Trek team said he would need an operation. As in the previous three stages, there was a breakaway almost right from the start in Le Touquet. French favorite Thomas Voeckler and Spaniard Luis Angel Mate Mardones broke clear inside the opening 10km but never managed to stretch out more than a three-and-a-half minute lead. Mate Mardones suffered a puncture, leaving Voeckler out on his own, but he was finally caught with 17km left. From there, the sprinters’ teams took over and set the stage for a thrilling dash to the line.