Tour Down Under stage 3

Adelaide, Australia, Jan 19, 2017 (AFP) – Emerging sprinter Caleb Ewan won his second stage at the season-opening Tour Down Under in Australia on Thursday.

The 22-year-old produced a powerful finish to surge home from the final turn and claim the 144-kilometre third stage from Glenelg to Victor Harbour in three hours, 24 minutes and 45 seconds. Dutchman Danny van Poppel looked set to claim victory as they rounded the
final turn, with Ewan back in eighth, but the Australian prevailed in a hectic dash to the line. World champion Peter Sagan weaved his way through traffic to cross a close second, with Italian Niccolo Bonifazio in third and van Poppel fourth.
After what he described as a nervous and stressful leg, Tasmanian Richie Porte retained his overall lead for BMC Racing and remains the man to beat for the General Classification with three stages remaining. The final push to the finish took a toll on the field with several riders,
including second-placed overall Spaniard Gorka Izaguirre, crashing to the tarmac. Izaguirre didn’t lose any time as the fall occurred with just under three kilometres to ride and he remained 20 seconds behind Porte, with Colombia’s Esteban Chaves two seconds further back in third.

Ewan admitted he thought he was in trouble heading for the finish. “I was a bit far back on the last turn,” he said. “I was jumping around on
wheels and luckily I got through in the end.” He said he struggled for much of the stage, after Wednesday’s arduous second stage in the Adelaide Hills. “Today was pretty tough backing up after yesterday. It took me probably three-quarters of the race to get into it again.” Ewan paid tribute to team-mate Luke Durbridge for putting him in a position
to win.
A pack of four formed a breakaway early in the stage and proved hard to run down. Well-credentialled Belgian Thomas De Gendt was the first to move and was soon joined by Clement Chevrier, Jeremy Maison and Vegard Laengen. With around 30 kilometres remaining the peloton started to reel the quartet in. Norway’s Laengen eventually dropped the other three and made a determined bid to hang on, only to be hauled in with around five kilometres to go.
Stage four is 149.5 kilometres long from Adelaide’s Norwood suburb to
Campbelltown. 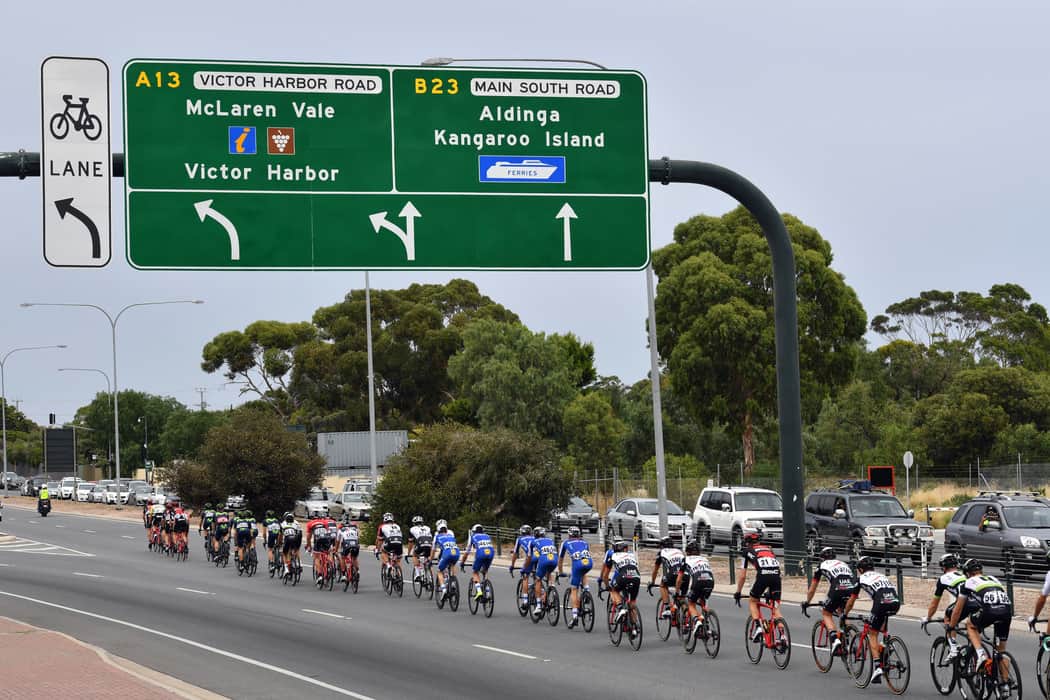