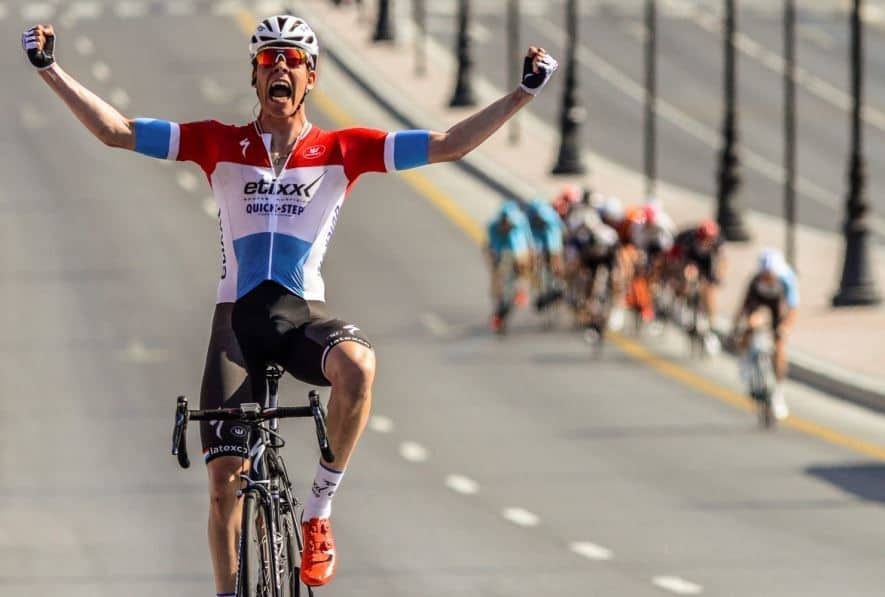 Unlike the previous years when stage 1 of the Tour of Oman traditionally finished with a bunched sprint, the battle between the GC contenders occurred as soon as day 1 and its hilly final part heading to Al Bustan. Among a group of 16 favourites where only Richie Porte and Alexander Kristoff were missing, Bob Jungels managed to power away on the final descent with 2 kilometres to go. Crossing the line alone with a 6’’ lead over Pauwels and Bardet, the Luxemburger claimed his first success in Oman, and his first win under his new Etixx Quickstep colours. Jungels leads the GC and will have to switch his national champion’s jersey for a bright red one.

A beautiful sunshine and warm temperatures welcomed the peloton of the 7th edition of the Tour of Oman for stage 1 of the event. 141 riders gathered in front of the Oman Exhibition Center for the start of the race before taking on the 145.5-km ride all the way to Al Bustan. The pack took off just after 11:00 heading west before returning towards Muscat.

After only two kilometres, two men managed to break away: Pfingsten (BOA) and Dehaes (WGG). Five kilometres later they were caught by three other riders:  De Vries (ROP), Van Speybrouck (TSV) and Koning (DPC). The gap rapidly grew over an unconcerned pack and reached 6’20 at km 25. From then on teams Astana and BMC took the chase on and the gap dropped. At the first intermediate sprint (km 76), claimed by De Vries ahead of Dehaes and Van Speybrouck, the pack however remained 3’05 adrift.

The front five managed to stay clear of the pack all the way to km 116 when Dehaes and Koning were the first to be dropped. Four kilometres later, the remaining three escapees were caught by the peloton just before the first climb of the day. The pack remained bunched all the way to the top of Al Hamriyah where Janse Van Rensburg (DDD) made it first ahead of Capiot (TSV) and De Plus (EQS). Just after that first difficulty, Pavel Kochetkov (KAT) gave it a go. After enjoying a 25’’ advantage at km 125 he was also to be caught.

The second bonus sprint (km 136) was then won by Capiot in front of Faria (LAM) and Kozonchuk (KAT). Time then came for the big battle between the favourites on the climb up Al Jissah. Among the first riders to be dropped was Richie Porte (BMC). Alexander Kristoff (KAT) winner of two stages here last year was the next of the big guns to struggle. Eventually, 16 men powered away. Among the front group were the likes of Nibali (AST), Rui Costa (LAM), Van Avermaet (BMC), Bardet, Pozzovivo (ALM), Martin, Jungels (EQS), Sepulveda (FVC), Boasson Hagen (DDD) and Rebellin (CCC). The final climb of the day (km 140) was conquered by Oss (BMC) ahead of Bystrom (KAT) and Fuglsang (AST).

With just under five kilometres to go, Sepulveda suffered a crash, loosing all hopes of claiming this first stage in Oman. The front group remained together on the long downhill portion towards the final straight. With two kilometres to go, Bob Jungels (EQS) managed to pull away, enjoying a 7’’ lead before the final kilometre. The Luxemburg national champion stayed clear of his rivals and went on to capture his first ever victory in Oman. Jungels also claims his first success under his new Etixx Quickstep colours while Serge Pauwels (DDD), 6’’ adrift, finishes second and  Romain Bardet third.

The day’s stage winner conquers the overall leader’s Red Jersey and has a 10’’ lead over Pauwels and 14’’ over Bardet. The Luxemburger also leads the points classification and the best young riders standings while Amaury Capiot (TSV) conquers the Most Aggressive rider’s jersey.