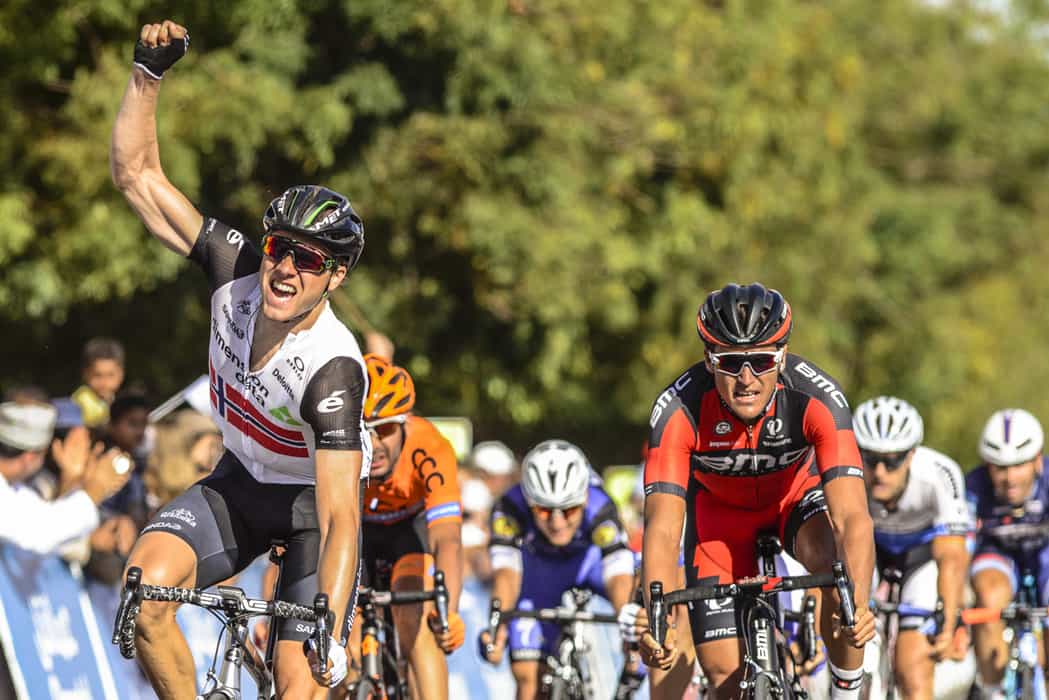 After losing his overall leader’s Red Jersey to Vincenzo Nibali during yesterday’s stage to Green Mountain, Edvald Boasson Hagen hit back in style. On day 5 of the Tour of Oman, the Norwegian managed to remain in the group of favourites that only just caught the breakaway riders with two kilometres to go, and powered to the line, claiming his second stage success of this 2016 edition. Already victorious of stage 2 at Quriyat, Boasson Hagen this time beat Greg Van Avermaet and Marco Canola to the line in front of the Ministry of Tourism. Well established in the front group, Nibali keeps the overall lead and still has a 15’’ advantage over Bardet with one day to go.

What better place than Yiti, just by the sea for the start of stage 5 of the Tour of Oman. The conditions were indeed magnificent and the landscape stunning for the start of the race, especially after yesterday’s demanding stage to Jabal Al Akhdhar. But after enjoying the splendid scenery, the pack of 138 riders would have to take on a short (119.5kms) but extremely tough course all the way to the Ministry of Tourism.

Indeed after taking off at 12:34 AM, the first few kilometres would be viciously hard. On the roller-coaster ride just after km 0, Jacques Janse Van Rensburg (DDD) managed to take off early. The South African was then caught by two other men at km 14 : Hugo Houle (ALM) and Pieter Weening (ROP). And the gap increased dramatically over a pack led by team Astana of new race leader, Vincenzo Nibali.

But from then on teams Astana and Lampre-Merida started chasing. At the top of the first of three climbs up Bousher Al Amerat (km 76.5), Janse again captured the most points while the pack moved closer at 4’18. The penultimate climb of the day would be a tough one for Houle dropped by his breakaway companions. Despite several attacks from Janse Van Rensburg, Weening managed to stay put and both men reached the top of the fourth climb (km 91) with a 2’ lead over Houle and 3’38’’ over the pack. While Houle was caught, that advantage dropped down to 1’13 at the second bonus sprint (fifth climb, km 106) again claimed by Janse. Meanwhile, just over twenty men remained in the red jersey group including all the race favorites.

With 13 kms to go, it was still looking good for the front two. Struggling against the wind, the leaders did however see the leaders move closer. With 10 kms to go, their lead had dropped to a worrying 38’’. Despite collaborating perfectly, there wasn’t much the front riders could do against the chasing pack. With just over 2 kms to go, they were eventually caught. A group of around 30 men remained together all the way to the final straight. Well led out by his three Dimension Data team mates, Edvald Boasson Hagen powered to the line, claiming his second stage success of this edition, his third in Oman. The Norwegian beats Greg Van Avermaet (BMC) and Marco Canola (UHC) to the line.

Comfortably settled in the front group, Vincenzo Nibali (AST), 12th of the day, keeps command of the GC and will wear the red jersey for the final stage tomorrow from The Wave Muscat to the Matrah Corniche. Thanks to his second stage success, Boasson Hagen leads the points classification while Brendan Canty (DPC) remains the best young rider. Capturing a total of 21 points today at both sprints and mountain climbs, Jacques Janse Van Rensburg captures the Most Aggressive rider’s jersey.