Runner-up of the 2012 Tour de France, Christopher Froome started his 2013 season in style, winning the 4th edition of the Tour of Oman that had never welcomed as many contenders for the upcoming 100th edition of the Grande Boucle. The Brit wins the event in front of Contador and Evans. The day’s stage finished in a bunched sprint claimed by Nacer Bouhanni ahead of Goss and Phinney. 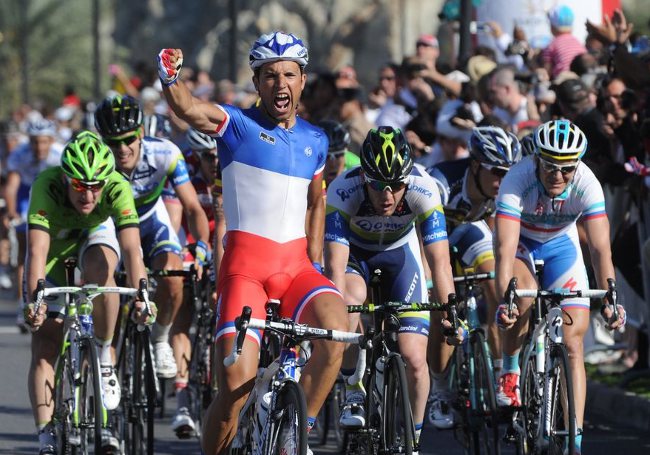 On the morning of the final stage, overall leader Christopher Froome (SKY) could enjoy a rather comfortable 27′ lead over Alberto Contador (TST) and 39′ over Cadel Evans (BMC). A good enough advantage to consider winning the Tour of Oman on his very first appearance in the Middle-Eastern event! Yet, there were still 144kms to be covered with possible upsets on the way and breakaway attempts to be mastered.

Under a beautiful sunshine, the 139 Riders left in the race took off from the Nawit Nagam Park and headed west to Muscate and a final circuit on the picturesque Matrah Corniche. After just a kilometre, Smukulis (KAT) was the first to break away. Shortly later, the Latvian was caught by two other riders: Kreder (VCD) and Di Corrado (BAR). Their gap grew rapidly over the unconcerned pack: 4’45 at km 8 and then 5’30 at km 19. The first intermediate sprint at Qurayyat (km 32) was claimed by Di Corrado over Smukulis and Kreder, while the pack remained 6’35 adrift.

It was then Smukulis’ turn to reach the top of the Qurayyat climb (km 39) in first position in front of Kreder and Di Corrado, while the gap reached a maximum 6’40. From then on, as teams Sky, Netapp-Endura and Argos-Shimano took on the chase, the leaders’ advantage dropped.

With 25 kilometres to go, the escapees only had a slim 1’05 lead. They were eventually caught on the final circuit on the Matrah Corniche at km 127. The pack remained bunched before the final showdown. After the third and final climb on the circuit, there were only around 80 riders left with a kilometre to go. The bunched sprint was eventually won by French national champion Nacer Bouhanni (FDJ), beating Goss (OGE) and Phinney (BMC) to the line.

Red jersey, Christopher Froome finished the last stage comfortably settled in the pack, therefore conquering his very first Tour of Oman victory. In the final GC, the Sky leader wins with a 27′ advantage over Contador and 39′ over Evans. Froome also wins the points’ classification while 21-year-old Kenny Elissonde (FDJ) is the best young rider of this 4th edition and Bobbie Traksel (CSS) most aggressive rider.

Being There: Voler Clothing Factory