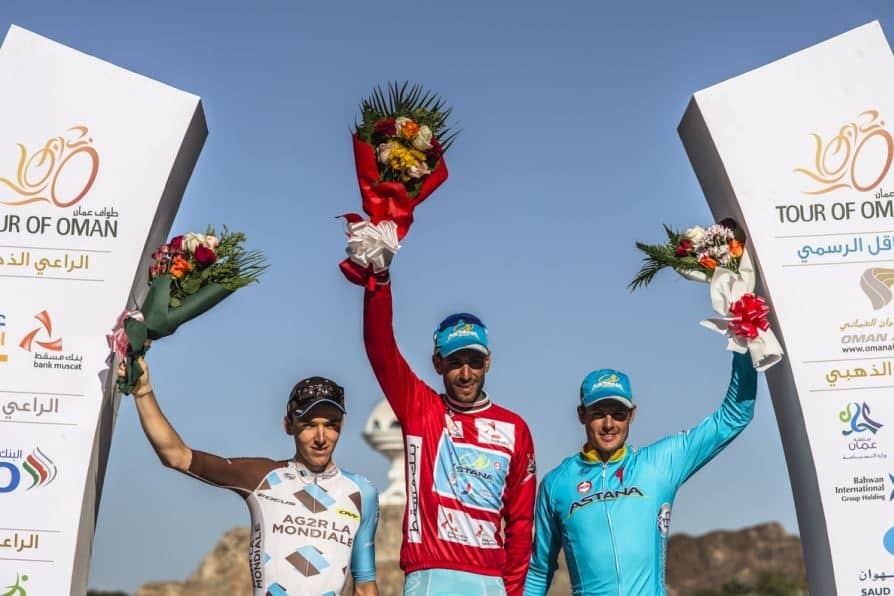 Thanks to his master piece on the climb up Green Mountain during stage 4 of the event, Vincenzo Nibali won the Tour of Oman for the first time in his career. The Italian who had finished runner-up of the race back in 2012, captures victory with a final  advantage of 15’’ over Frenchman Romain Bardet and 24’’ over his Danish team mate Jakob Fuglsang. The final stage of the race was claimed in a bunched sprint by Alexander Kristoff, earning his second stage success of this 7th edition. A promising start to the season for both Kristoff in his quest to capture glory in the classics and Nibali hoping to win the Giro d’Italia for the second time.

For the final day of the Tour of Oman, the 138 remaining riders of the event were warmly welcomed at the residential area of The Wave Muscat by hundreds of spectators including a strong Norwegian contingent coming to cheer on their heroes, Alexander Kristoff (KAT) and Edvald Boasson Hagen (DDD). Wearing the overall leader’s Red jersey, Vincenzo Nibali (AST) could count on a 15’’ lead over Romain Bardet (ALM) as the pack took off at 12:25 for a 130.5-km ride all the way to the Matrah Corniche. 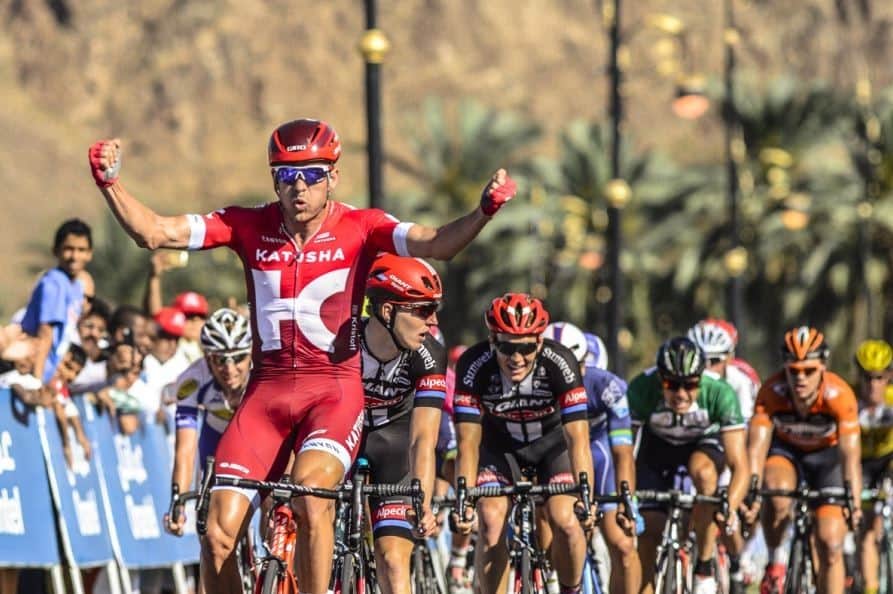 “I felt good, but also the team was super strong today. Dima (Kozonchuk) did an excellent job the whole day in front of the peloton, holding the break at 2 minutes and saving the energy for the other teammates. Coming on the local laps, we had Jurgen (Van den Broeck) and Pavel (Kochetkov) who worked well. In the last lap there were some attacks in front, but Michael (Mørkøv) and Marco (Haller) controlled everything. In the final Marco again did a phenomenal job from 2 km to the last 500 meters, while later it was Jacopo Guarnieri, who leaded me out really well until 200 meters to go. For me it was just a question of keeping the speed and finalizing this day with a victory.”

After an extremely fast start and numerous breakaway attempts, six men eventually managed to take off at km 18.5: Minard (ALM), Muhlberger (BOA), Meersman (EQS), Van Speybrouck (TSV) Eaton (UHC) and Marycz (CCC). These six were then to be caught up by a seventh rider, Asselman (ROP), at km 26.

The gap grew progressively and reached a maximum of 2’30’’ at km 40. From then on, team Katusha took on the chase. At the top of the first climb of the day (Al Hamriyah, 78), won by Van Speybrouck ahead of Minard and Marycz, the pack remained 1’48’’. That gap dropped down to 1’38’’ at the first intermediate sprint (km 92) claimed by Van Speybrouck. The Belgian again reached the summit of the second climb (Al Jissah, km 95) in the lead while the gap had stabilized.

But the chase intensified and as the front seven entered the final circuit on the Matrah Corniche for three laps, the pack moved closer: 52’’ at the first crossing of the line. While the second bonus sprint was won by Van Speybrouck ahead of Meersman and Muhlberger, the pack led by teams Katusha and Wanty Group Gobert was within shooting distance, at 40’’. Just after that sprint, Meersman decided to attack taking with him Minard, Muhlberger and Van Speyboruck but the last four survivors of the day’s breakaway were eventually caught with 5 kilometers to go.

Despite the pack breaking up into several groups all the main favourites remained at the front and stage victory would be decided in a bunched sprint. Perfectly led out by his Katusha team mates, Alexander Kristoff powered to line beating Zico Waeytens (TGA) and Soren Kragh Andersen (TGA). The Norwegian who had already triumphed at Naseem Park wins his second stage of this edition and his fifth in Oman. Already victorious on three occasions during the Tour of Qatar, Kristoff does even better than last year at the same period, capturing a total of 5 wins in just 11 days.

21st of the stage, Vincenzo Nibali wins this 7th edition of the Tour of Oman after conquering the Red Jersey at the end of stage 4 heading to the top of Green Mountain. In the final general classification, the Italian finishes with a 15’’ lead over Romain Bardet (ALM) and 24’’ over Jakob Fuglsang (AST). A winner of two stages and 6th overall, Edvald Boasson Hagen wins the points classification while Brendan Canty (DPC), 7th of the GC, finishes best young rider. The Most Aggressive jersey of the Tour of Oman goes to South African Jacques Janse Van Rensburg who also wins the team classification with his Dimension Data squad.
Photos: Muscat Municipality/Paumer/Kåre Dehlie Thorstad