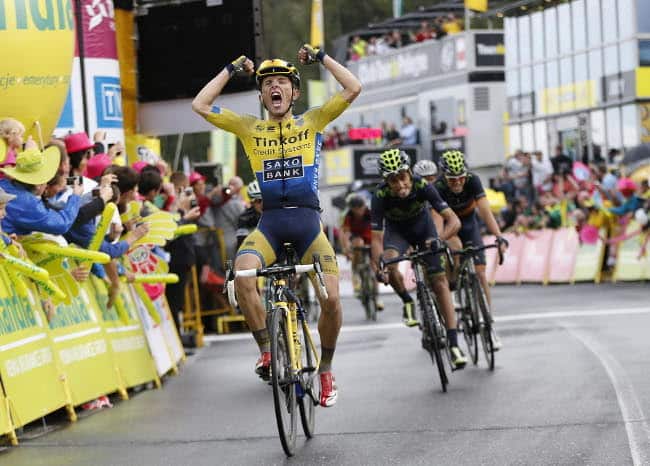 For the first mountain stage in the 2014 edition, the Tour de Pologne chose a never-before-seen and spectacular arrival in Slovak territory. After stirring enthusiasm on the climbs in the Tour de France with 2 stage victories and the polka dot jersey, Rafal Majka gave his fans exactly what they wanted by winning on the roads of the Tour de Pologne as well.

However, the group pulled by the men on Omega-Pharma, protecting Vakoc’s yellow jersey, and riders from Tinkoff-Saxo supporting Majka, kept the break well under control, never letting them get more than 3 minutes ahead and catching up to all the fugitives during the second of two, 25.4 km laps on the uphill circuit at Strbske Pleso. With less than 3 km to go to the finish line the race really heated up when out in front important riders started to pump up the pace, like Fabio Aru, Rajder Hesjedal and last year’s winner Pieter Weening who then tried to get out front solo with about 1km until the finish line. But in the final metres the big guns caught up with him and with a powerful progression of moves Rafal Majka got the best of them all, crossing the finish line first, ahead of Spain’s riders from Movistar Beant Inxausti and Jon Izaguirre. These were followed by Gianluca Brambilla (Omega Pharma), Warren Barguil (Giant Shimano), Samuel Sanchez (Bmc Racing), Davide Formolo (Cannondale) and Petter Nordhaug (Belkin), Andrey Amador (Movistar) and Przemyslav Niemiec (Lampre-Merida) .

Petr Vakoc, who lost touch with the lead group only in the last part of the final climb, held strong to cross the finish line in 40th place, 26′ back, succeeding in his enterprise to keep the yellow Skandia leader’s jersey by just one little second over Rafal Majka. After them in the new classification come the Spanish men from Movistar Beant Intxausti at 5′ back and Jon Izaguirre at 7′.

The cyclamen Tauron jersey for the GPM is back on the shoulders of Pole Maciej Paterski (CCC Polsat), the blue Lotto jersey for the most active rider in the group remains with Matthias Krizek (Cannondale) and the white-red Lang Team jersey for the points classification is on Yauheni Hutarovich (Ag2r). In the team classification now Team Movistar is in the lead.

Tomorrow is the reigning stage of the Tour de Pologne, with thirty riders within less than half a minute of each other on the selective circuit in Bukowina with 10 gpm for a total of 174 km. It promises to be spectacular, with the battle to capture the yellow jersey and play for victory in the Tour de Pologne on the eve of the final time trial in Krakow.

Rafal Majka (the winner): “Thank you to my teammates because they did a great job. We pulled on the last climb and also the first climb. Also we had one of our guys in the breakaway, so we controlled the race. But tomorrow is difficult, so I don’t know how I’ll feel. But today, I have to say I’m tired as this was not to easy. The climb was so fast, in a big gear. Maybe I won because I have a lot of motivation from all the Polish supporters on the road screaming my name. I’m so happy because I came to this race especially for them. It’s perfect, I’m so happy. Ten years there’s no win at Tour de Pologne from a Polish guy, but of course I do it just like at the Tour de France when I won two stages as a Polish rider. So tomorrow we will again need to fight, but I am not sure how I will feel. I know the final time trial because the course is only 20 kilometers from my home but first of all we will see tomorrow. For the moment I want to enjoy this victory with my great team.”

Petr Vakoc (jellow jersey): ‘It was a really hard finish. At 5 kilometers to go I was still with the front group pushing as hard as I could. I tried to limit my losses. I did that climb before only the opposite way. I knew it would be really challenging but I had a chance to keep the jersey. When I crossed the line I saw that the time gap was 27 seconds, but then they told me that I lost the jersey. So, I was disappointed and went to the hotel. I went to take a shower but first I opened Twitter and I saw that there was actually enough of a gap where I actually kept the lead. So it was a really nice surprise and I’m happy I can wear this jersey for another stage. I have to thank my teammates for again taking good care of me today to give me a chance to fight.’

Czeslaw Lang (TDP General Director): “Today we had another great day at Tour de Pologne. Also here in Slovakia the crowd was fantastic and the riders did a great performance. In tv we had 4 millions of viewers. It was an unforgettable stage with a great winner. After 10 years without a Polish victory, Majka put down a fantastic race. He showed that he is a rider who has good legs, but also has a great sense for the race. He had the team working for him and in the final he choose the right moment to make his move.’

Check out the last videos of TDP on:
https://www.youtube.com/user/TourdePologne2011/videos

STRBSKE PLESO, Slovakia, Aug 07, 2014 (AFP) – Results of the Tour of Poland fifth stage, a 190km ride from Zakopane across the border to Strbske Pleso in
Slovakia: