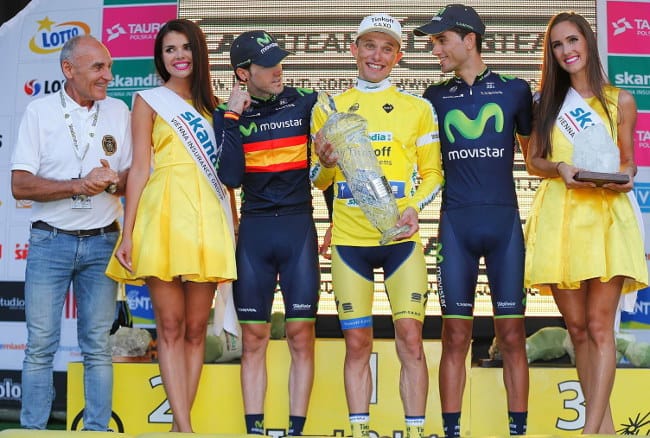 Rafal Majka (Tinkoff-Saxo) is the winner of the 71ø Tour de Pologne. The thrills were unlimited today in the final stage, the 25 km individual time trial that started and finished in the heart of Krakow. The time trial saw two parallel races play out. On one side there was the battle for stage victory, on the other the final confrontation among the top riders to capture the yellow Skandia jersey.

Among the time trial specialists it was Belgian champion Kristof Vandewalle (Trek) who took home the final stage of the Tour de Pologne with a time of 29’18’ he beat Italian Adriano Malori (Movistar) by 03′ and was 10′ ahead of Brit Stephen Cummings (BMC Racing).
However most of the interest was turned to the battle for the yellow Skandia jersey: on one side there was Majka and all of Poland, on the other the red furies from Movistar Beant Intxausti and Jon Izaguirre. After having dominated the two mountain stages in Strbske Pleso and Bukowina, Rafal Majka set off with an advantage over Spaniards Intxausti and Izaguirre, respectively 18′ and 22′ behind. It was too small of an advantage for Majka to rest easy.

Following the script, the most insidious rival turned out to be Jon Izaguirre, Spanish national vice-champion in this specialty, who starred in a great test, closing out the time trial in seventh position, 29′ from the winner Vandewalle. However Majka came back defending himself with a superb performance, closing out 13th at 43′ from the winner and ceding only 14′ to Izaguirre. Thus Majka held on to the yellow jersey by 8′. The roar from the crowd followed Majka for his entire ride and at the finish line, once the news of his victory was confirmed, the enthusiasm of the throngs exploded as all of Poland embraced their champion, Rafal Majka.

When Rafal Majka stepped on to the podium in the square in Krakow and donned the yellow Skandia jersey raising his arms to the sky in triumph, just one word could be heard echoing through the roar of the crowd?’dziekuje’, that is to say, a thanks from the fans to their champion who has taken Poland to the apex of world cycling.

After the masterpiece he performed in the Tour de France, with two stage victories and the polka dot jersey, Rafal Majka has also succeeded in bringing Poland back to the top of the podium at the Tour de Pologne, where the last Pole to make it there was Cezary Zamana in 2003, when the race however was still not a part of the World Tour, the maximum series in cycling. In fact, Rafal Majka has become the first Polish rider in history to take home the final classification of a World Tour stage race.

In the other classifications for the Tour de Pologne Poland is also partying for Maciej Paterski (CCC Polsat) who won the cyclamen Tauron jersey for the GPM. Austrian Matthias Krizek (Cannondale) took the blue Lotto jersey that crowns the most active rider in the group and Belorussian Yauheni Hutarovich (Ag2r La Mondiale), winner of the first stage in Gdansk, captured the white-red Lang Team jersey for the points classification. Team Movistar, with three riders in the top10 (Izaguirre, Intxausti and Amador) won the team classification.


Post Races Quotes:
Rafal Majka: “First of all I have to thank my teammates. This week they stayed on the front full gas for me. Also I have thank my family and the Polish people who stood in the roads and scream my name. I’m so happy. Last year when I did it I was 4th, these people made me feel like I won this race. I promised that I would win this year’s Tour of Poland and I did it. I’m so happy. I won two stages here in my country and the general classification, there are no words to describe the joy. But I didn’t win alone. My teammates and staff helped me and I’m thrilled that I have three-year contract with Tinkoff-Saxo who supported me so well. When you want to win, you have to fight and I did, as I did yesterday, when I went full gas, attacked, and won my second stage to also take the Yellow Jersey as race leader. When I started the time trial today I still only led by some seconds, but I will able to battle and win Tour of Poland. My family, my girlfriend, my teammates, and my Polish public, I dedicate this win to them. Now, after preparing for the Giro, the Tour de France, and Tour de Pologne, after the USA Pro Challenge in Colorado I will need to rest after a long period of hard work.”

Kristof Vandewalle (TT winner): “It was a hard week. It was a long race with some challenging stages. But we suffered and we survived with one goal, which was to have a big result today. I am really happy with my victory. It was a really flat parcours, we averaged more than 50 kilometers per hour. Some of the roads were a little up and down but I could always keep a good rhythm. In the end I almost missed the last corner, but I had some seconds left. Now I can enjoy this win with my teammates. After this race I am off to La Vuelta, and then I will focus on the World Championships, such as the TT. Then, we will see from there. For now I want to enjoy this moment. Majka was the best, he was really strong. There was no one who could beat him. To do this after such an impressive Tour de France, he must be a really powerful guy. I think he is a young guy who can really do something special in the future.”

Jon Izaguirre (2nd of GC): “I gave everything in this TT. It was a fast race and I really went full gas. At the end I’m second, just like last year, but I have to say that Majka deserves this victory. He was consistent and the strongest rider in the race. As a team we did well. We have two guys on the podium and we won the team classification, so it’s a race to remember for us.’

Czeslaw Lang (TDP General Director): ‘Finally a Polish rider can win the final classification again and this is the first time since the race has reached the WorldTour status in 2005. We are very proud because the riders gave a fantastic show this year. Through his victory Majka made a great achievement, not only for him for the all Poland. I think Majka can win the Tour de France one day. That’s possible because he is 24, still young and in the making, and he is improving very gradually. In the time trial he is not as strong as Wiggins and Cancellara but is able to fight against the best climbers. In terms of climbing, he showed he can win a very difficult stage. And he has a fight spirit and he is a borned winner.’