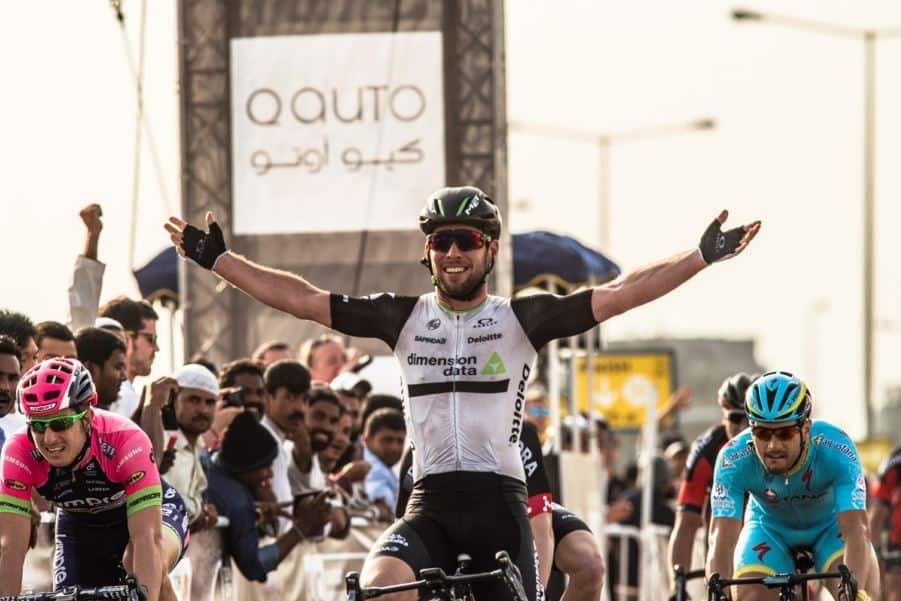 The 15th edition of the Tour of Qatar started in style and full speed ahead. At an average speed of close to 52km/h, Mark Cavendish flew to an impressive stage success for his return on the race after his last triumph in 2013. The Brit captured his first win under his new Dimension Data colors, earning his 9th victory in Qatar. After being among a 21-man group taking off early, ‘Cav’ was the fastest of the sprint on the Al Khor Corniche, beating Modolo and Guardini to the line.

For the first stage of the 2016 Tour of Qatar, the riders are gathered on the eastern coast of Qatar, in the city of Dukhan for the start of the race. Under a bright sunshine and in rather windy conditions, 140 competitors took off for a 180.5-km ride all the way to Al Khor on the north-western coast.

After an extremely fast start due to the favourable wind, the first real action started at km 38 when the pack broke up into two main groups. Twelve kilometres later, again the front group of around 100 men parted leaving only 21 riders at the front. Among the leading group were the likes of Kristoff (KAT), Cavendish, Boasson Hagen (DDD), Andersen (TGA), Van Avermaet (BMC), Bennett (BOA), Gerard (FVC), Guardini (AST) and Modolo (LAM). Their lead grew from 35’’ at km 57 to 50’’ at km 81.

The first intermediate sprint (km 106.5) was claimed by Kristoff ahead of Cavendish and Modolo while the first chasing group remained 1’05’’ adrift.  And the gap remained the same all the way to the second bonus sprint, claimed by Cavendish in front of Kuznetsov (KAT) and Van Avermaet, and beyond. Indeed with 20kms to go, the front men could still enjoy a 1’10’’ lead. Eventually a group of 16 men reached the final 3 kms with a 1’30 advantage and could start considering stage victory.

Taking off from far out and making the best of the tailwind on the Al Khor Corniche, Mark Cavendish stayed clear of his rivals, victoriously crossing the finish line ahead of Sacha Modolo and Andrea Guardini. The Brit conquers his 9th stage in Qatar and triumphs for the third time in Al Khor after 2012 and 2013.

Thanks to his success, the 2011 road World Champion captures the overall leader’s golden jersey that he last wore when he won the event back in 2013. Cavendish also leads the points classification while Soren Andersen (TGA) captures the white pearl jersey for the best young rider.
Photo:  ©QCF/Paumer/Kåre Dehlie Thorstad