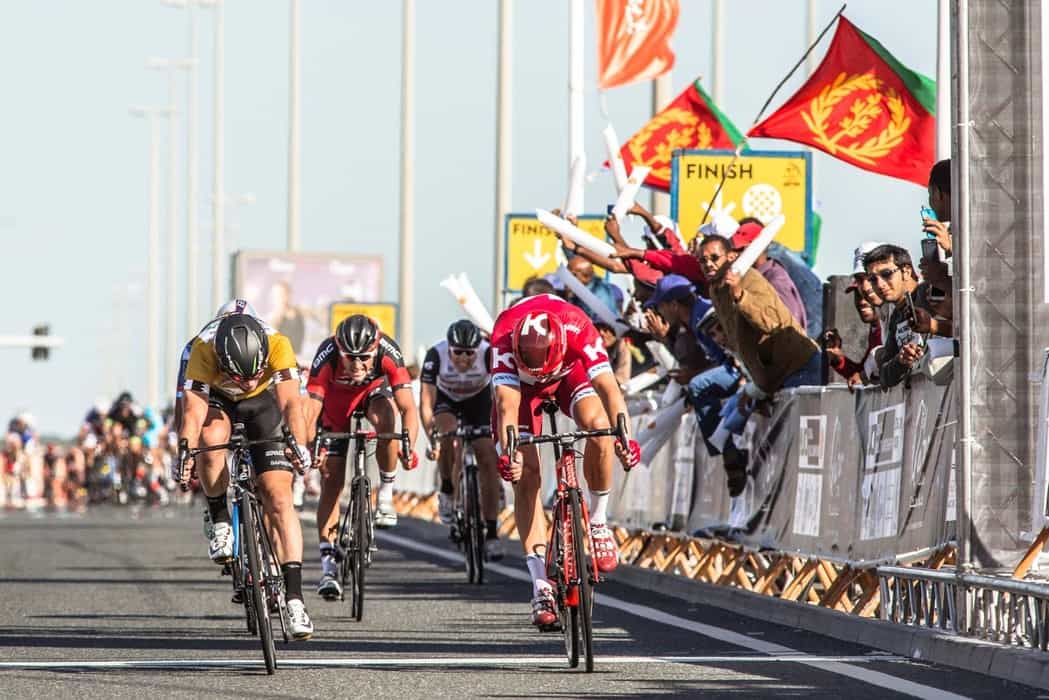 After conquering stage 1 and the golden jersey yesterday, there wasn’t much Mark Cavendish could do against Alexander Kristoff on day 2 of the Tour of Qatar. In a final bunched sprint by the Qatar University, the Norwegian powered to the line, beating his main rival by just a few inches and capturing his fourth stage success in Qatar. The day had been intense for Cavendish not present in the group of favorites that had taken off in the early stages of the race. And after things had settled, once on the circuit of the next World Championships, and the pack bunched up, the Brit had to be content with second spot on the day. Before the all-important time-trial, he keeps his GC leader’s Golden jersey.

On the occasion of the Qatar National Sport Day, stage 2 of the Tour of Qatar would indeed be an intense one. The reason: a very strong wind blowing from the north-east of the peninsula. On this second day of the event, the riders would also have the opportunity to discover the final circuit of the next road World Championships in october. And on such an occasion, it was only natural to see UCI president Brian Cookson launch the 136 riders for their 145.5-km effort.

Facing the wind, the first part of the stage was rather slow, unlike yesterday’s extremely fast day that saw Mark Cavendish conquer his 9th win in Qatar. After only two kilometres, four men managed to break away from the pack: Lieuwe Westra (AST), Preben Van Hecke (TSV), Gediminas Bagdonas (ALM) and Brian van Goethem (ROP). The gap rapidly grew and reached 1’30 at km 25.

But after a change in direction, heading back south, the pace dramatically changed and the pack broke up into several groups. While the front four were caught at km 35, just over 20 men powered away at the front.  Among the group were the likes of Kristoff (KAT), Boasson Hagen (DDD), Bennett (BOA), Guardini (AST) and Hofland (TLJ). At the first intermediate sprint (km 39) claimed by Kristoff ahead of Boasson Hagen and Kuznetsov (KAT), the chasing bunch including Cavendish and Modolo (LAM) were 14’’ adrift. That gap grew to 50’’ as the leaders entered the Pearl World Championship circuit (km 79).

Eventually the golden jersey group managed to catch up with the front group and the pack bunched up at km 84. That was the moment chosen by two men to take off : Preben Van Hecke, again, and Gatis Smukulis (AST). The second bonus sprint set on the finish line of the next ‘Worlds’ was won by Van Hecke ahead of Smukulis while the peloton led by Boasson Hagen, third, remained 43’’ adrift. The front duo’s advantage reached a maximum 1’ lead at km 110 before teams Dimension Data, BMC and Katusha started chasing them down. They were eventually caught at km 125.

After exiting the Pearl circuit, the pack remained bunched all the way to the final straight by the Qatar University. On the slightly uphill sprint, several riders, including Guardini (AST), Brown (DPC) and best young rider Andersen (TGA) suffered a crash. That didn’t prevent the big guns to battle it out for victory. Well led out by his Katusha boys, Alexander Kristoff only just managed to capture the win, beating Cavendish to the line by just a few inches, while Roy Jans (WGG) finished third. The Norwegian captured his 4th stage success in Qatar after triumphing three times last year.

In the new general classification, Mark Cavendish keeps his golden jersey but now only has a 5’’ lead over Kristoff and 14’’ over Modolo. The Brit also keeps command of the points classification (silver jersey) while Sven Erik Bystrøm (KAT) becomes the best young rider of the event (white pearl jersey).

Team Rally Is Ready To Rally