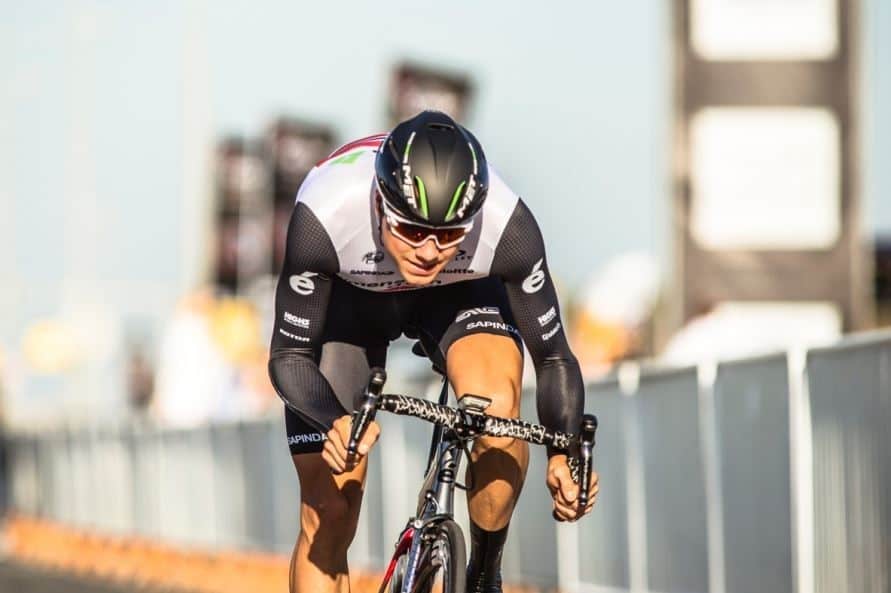 The Tour of Qatar has a new boss. Thanks to his outstanding performance on the day’s 11.4-km time-trial, Edvald Boasson Hagen not only captured his first ever success in Qatar, beating Van Emden and Quinziato, he also took a solid command of the general classification. Despite an excellent 7th fastest time today, Mark Cavendish sees his Golden jersey go to his Dimension Data team mate.

After two normal stages and intense battles between the top guns of the Tour of Qatar, day 3 of the event offered a far diffferent menu to the 133 remaining riders : a windy 11.4-km individual time-trial set between the Lusail MotoGP circuit and the spectacular Arena that welcomed last year’s handball World Championships.

After best times set by Jesse Sergent (ALM), and Jordan Kerby (DPC), experienced Lieuwe Westra (AST) hit hard, clocking a reference time of 14’09’’. The Dutchman’s time remained unthreatened for 45 minutes before his compatriot Jos Van Emden (TLJ) flew to the line in an impressive time of 13’51’’.

But the man of the day would be Edvald Boasson Hagen (DDD). The Norwegian first set the fastest time at the intermediate time-check in 6’16 before crossing the line in an astonishing 13’26’’, winning the stage at an average speed of 50.918 km/h, with a comfortable 25’’ advantage over Van Emden and 29’’ over Manuel Quinziato (BMC). On the exact same circuit as last year, the Dimension Data rider thrashed the previous record set by Niki Terpstra (14’03’’) and established a time that was 59’’ faster than his personal best of 2015 when he finished 8th.

Starting his timed effort with a slim 5’’ lead over Kristoff in the GC, Mark Cavendish had to bid farewell to his Golden Jersey, despite a very decent 7th fastest time, just 44’’ adrift. The new overall leader is his team mate Boasson Hagen who can enjoy a 26’’ advantage over Cavendish and 29’’ over Quinziato. ‘Cav’ however keeps command of the points classification and will therefore be wearing the silver jersey on tomorrow’s 4th stage between Al Zubarah and Madinat Al Shamal. The white pearl jersey for the best young rider switches shoulders and returns to those of Soren Kragh Andersen (TGA).