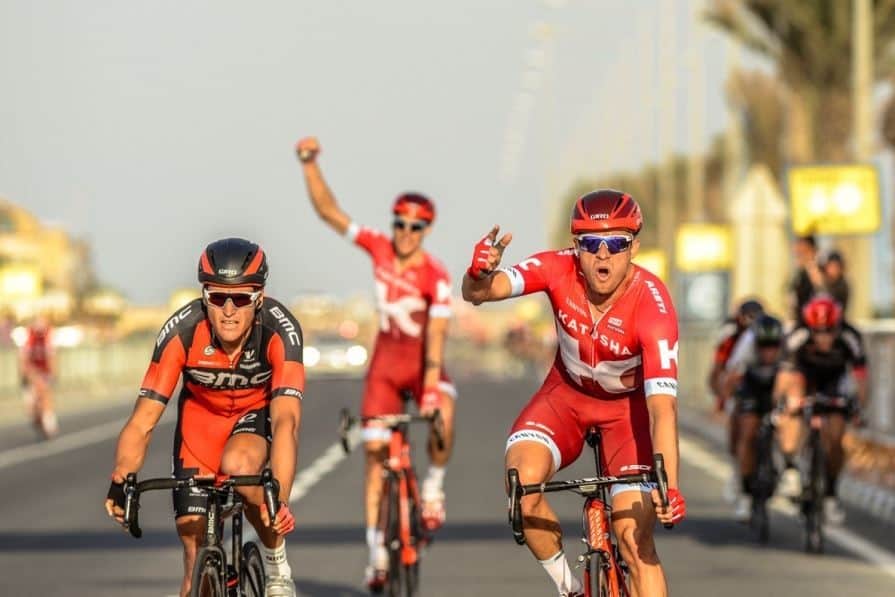 Looking almost untouchable in gold after his time-trial win yesterday, Edvald Boasson Hagen was hit by bad luck on the 4th stage of the Tour of Qatar. Perfectly positioned at the front with 10 kms to go, the Norwegian suffered an unfortunate puncture that cost him his overall leader’s golden jersey. The day’s stage victory eventually went to his compatriot Alexander Kristoff winning for the second consecutive year in Madinat Al Shamal. Very saddened by his team mate’s upset, Mark Cavendish, fifth today, moves back into race leadership. The battle for glory promises to be extremely intense tomorrow for the final day of the event: indeed only 2’’ separate ‘Cav’ from his closest rival Greg Van Avermaet in the GC.

A day after what looked to be a decisive time-trial conquered by Edvald Boasson Hagen (DDD), the riders gathered around the World Unesco heritage site of the Al Zubarah Fort for stage 4 of the Tour of Qatar. On the menu: a 189-km stage heading to Madinat Al Shamal where the 132 riders would battle it out on a final wind-swept circuit.

After an extremely fast start, thanks to the tailwind, several riders tried their luck but their breakaway efforts were vain. Eventually after 17 kilometres, 9 men managed to power away from the pack : Zakharov (AST), Van Hecke (TSV), McNally (WGG), Gretsch, Turgot (ALM), De Vries (ROP),  Eaton (UHC) and Koep (SSG). Their lead reached a maximum 2’15’’ advantage at the first intermediate sprint (km 73) won by Gretsch ahead of Van Hecke and Zakharov.

After a sharp right turn, the pace of the pack went dramatically faster, led by team BMC Racing. While the gap with the front men started dropping, the pack broke up into several groups. In the leading group of 31 behind the escapees were golden jersey Boasson Hagen, silver jersey Mark Cavendish (DDD), white pearl jersey Andersen (TGA) as well as all the main favourites. The gap continued dropping and eventually the front 9 were caught at km 88. Meanwhile as the front group entered the circuit around Madinat Al Shamal, the main pack including the likes of Sam Bennett (BOA) and Sven Erik Byström (KAT) remained 52’’ adrift. Facing the wind, all the groups eventually bunched up together again at km 110.

Five kilometres later, four men gave it a go: Van Hecke, McNally and Gretsch, again, as well as Asselman (ROP). Their lead rapidly grew and reached a maximum 2’15’’ at the first crossing of the line (km 135). At the second bonus sprint (2nd crossing of the line, km 148.5) won by Gretsch ahead of Asselman and McNally, the bunch had moved closer but remained 1’25’’ adrift.

Led by team Dimension Data, the pack carried on gaining time on the breakaway riders who were finally caught with just under one lap to go (km 176). The riders from teams BMC and Lotto NL- Jumbo then decided to take control of the bunch and while 33 riders were left at the front, overall leader Boasson Hagen suffered a puncture with just under 10 kilometres to go. Despite being helped out by team mate Reguigui, the Norwegian was left stranded behind. BMC continued powering ahead and the gap over yesterday’s stage winner reached 40’’ with 5kms left.

While Boasson Hagen was seeing his golden jersey hopes fade away, time had come for a bunched sprint. Perfectly led out by his Katusha team mates, Alexander Kristoff flew to his second stage win this year, only just beating Greg Van Avermaet (BMC) to the line while Jacopo Guarnieri (KAT) finished third. Already a winner in Madinat Al Shamal last year, Kristoff claimes his fifth success in Qatar.

Fifth on the day, Mark Cavendish (DDD) re-conquers the golden jersey from his team mate Boasson Hagen. The Brit has a very slim 2’’ lead over Van Avermaet and 6’’ over Quinziato (BMC) with one final stage to go. Thanks to his stage win, Kristoff takes command of the points classification and will be wearing the silver jersey tomorrow between the Sealine Beach Resort and the Doha Corniche. The white pearl jersey for the best young rider remains on the shoulders of Soren Kragh Andersen (TGA).