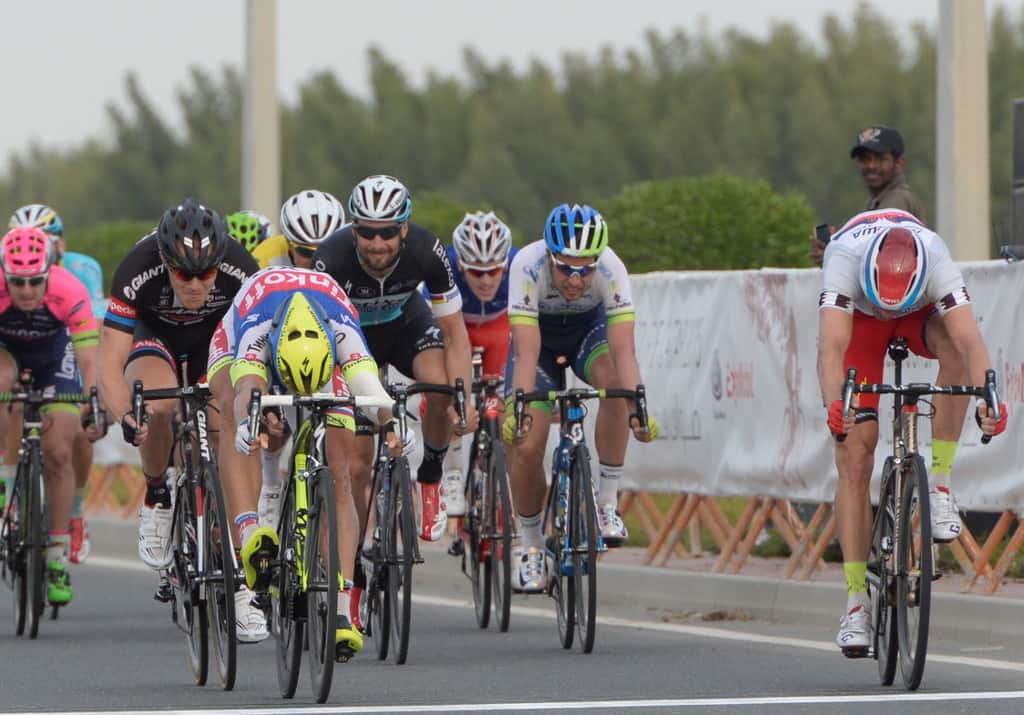 RBA/ASO
After a tremendous battle as soon as the first kilometers of racing, the pack eventually made it bunched on the final circuit around Madinat Al Shamal. Like on the previous day, Alexander Kristoff claimed the stage win in impressive fashion. The Norwegian however only just beat Peter Sagan to the line while Nikias Arndt again finished third. Kristoff captured his third stage success on the 2015 Tour of Qatar. Despite a fright in the closing moments of the race, Niki Terpstra managed to finish in the pack and retains his overall leader’s Golden Jersey.

It was as windy as on the previous stages when the 139 remaining riders of the 14th edition of the Tour of Qatar gathered around the splendid Al Zubarah Fort for the start of stage 5. On the day’s menu: a 153kms race heading south-east at first, before returning to the Fort and finishing on a circuit around Madinat Al Shamal.

As soon as the first kilometers, the Etixx Quickstep team accelerated and the pack broke up into several echelons. Just under 40 riders were present at the front including Golden Jersey Niki Terpstra (EQS), Silver Jersey Alexander Kristoff (KAT), White Pearl Jersey Luke Rowe (SKY), as well as Peter Sagan (TCS), Adam Blythe (OGE) and Tom Boonen (EQS). Several big names however were left stranded in the chasing group including the second rider overall Maciej Bodnar (TCS) and Fabian Cancellara (TFR). A tremendous battle went on between the two bunches at an average speed of close to 50km/h. The gap however never went over 35”. Eventually, after 62 kilometres of an impressive combat, the peloton bunched up together.

Just a few kilometers later, five men managed to take off: Hermans (BMC), Haller (KAT), Gruzdev (AST), Wallays (TSV) and Hayman (OGE). This leading quintet enjoyed a 50” advantage at km 80. At the first intermediate sprint (km 87) won by Hayman ahead of Wallays and Gruzdev, the pack was 1’38 adrift. The gap reached a maximum 2’35 at km 102 before the chase intensified.

At the second bonus sprint (km 126), claimed again by Hayman in front of Wallays and Gruzdev, the peloton had seriously closed in, 38” adrift. The front five were eventually caught at km 135 with just over one lap to go. In the final ten kilometres, the Tinkoff Saxo squad pushed harder and ten men powered away: Boonen, Van Keirsbulcke (EQS), Sagan, Bodnar, Breschel (TCS), Kristoff, Bystrom, Guarnieri, Paolini (KAT) and Blythe (OGE), but no Niki Tersptra. Despite enjoying a slim 15” advantage, the front group was however caught before the final explanation.

At the end of the long straight in Madinat Al Shamal, Alexander Kristoff again proved he was the fastest sprinter of the bunch. Like on the previous day in Mesaieed, the Norwegian beat Peter Sagan and Nikias Arndt to the line, capturing his third stage success this year. Thanks to his victory, the winner of Milan – San Remo last year moves up to third spot overall. Finishing in the pack, Niki Terpstra keeps his leader’s Golden Jersey and with one stage to go has a 6” advantage over Bodnar and 11” over Kristoff. The White Jersey for the best young rider changes shoulders and goes to Peter Sagan.