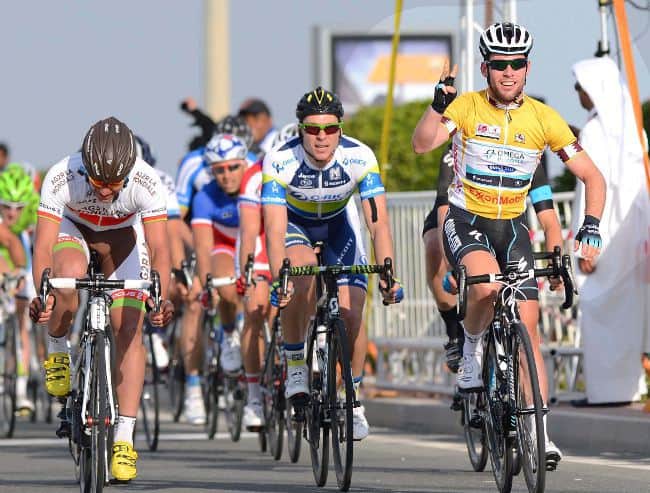 In Madinat Al Shamal, the city where he had won his very first stage on the Tour of Qatar, back in 2009, Mark Cavendish conquered yet another success on this year’s edition. After an eventful day with several breakaway attempts, the Manx Missile was beautifully led out by his Omega Pharma team mates on the final straight, where he outsprinted Hutarovich and Kruopis for his third win of the event. Cavendish therefore comforts his overall leadership and can now enjoy a 15′ advantage on Bookwalter before the final stage tomorrow on the Doha Corniche.

By the splendid castle of Al Zubarah on the western coast of Qatar, the 136 remaining riders of the Tour took off for the penultimate stage of this 12th edition: a 154km ride, ending by two laps of a circuit around Madinat Al Shamal. After a very fast start, Edvald Boasson Hagen (SKY) was the first to break away after 21 kilometres. He was rapidly caught by Haller (KAT) and their lead reached a maximum 1’20 at km 28 before both were finally caught at km 45. After having covered an impressive distance of 49.2 kms during the first hour, it was then Eisel (SKY) and Phinney’s (BMC) turn to give it a go but their attacking effort was vain.

At kilometre 64, five men managed to pull away from the pack: Elmiger (IAM), Lagutin (VCD), Jiao (CSS), Di Corrado (BAR) and Uchima (JPN). At the first intermediate sprint (km 88.5) won by Elmiger, ahead of Di Corrado and Lagutin, the front men could enjoy a maximum 2’50 lead. The pace remained extremely fast, 49.85 km/h after two hours, as the peloton moved closer to the escapees. After heading north to the final circuit, the pack broke up into several groups with Cavendish (OPQ), Bookwalter and Phinney (BMC) in a first bunch of 52 men and Boasson Hagen, Guardini (AST) and Markus (VCD) in a chasing group. After the front riders were finally caught by the Golden jersey group at km 105, the pack bunched up together again five kilometres later.

At the second bonus sprint at the first crossing of the line on the final circuit (km 127.5), Cavendish conquered more precious seconds beating Eisel and Phinney to the line. Shortly after, Phinney, EIsel and Terpstra (OPQ) powered away from the pack. With the Omega Pharma Quickstep riders chasing, they were to be caught at km 137 after having had a 30′ lead.

Under the control of the sprinters’ teams, the pack remained bunched all the way to the finish. Perfectly led out by Terpstra, Mark Cavendish claimed yet another success, his third of the race, only just beating Yauheni Hutarovich (ALM) while Aidis Kruopis (OGE) had to settle for third spot.

In the new overall standings and with one stage to go, Cavendish now has a 15′ lead over Bookwalter and 20′ over Phinney. Enough to really consider a first Tour of Qatar title. The Brit also leads the points’ and excellency classifications. Phinney remains best young rider of the event.

TEAM REPORT
Tour of Qatar Stage 5: OPQS Gives Cavendish Textbook Leadout for Third Straight Win!
Extends GC Lead
07-Feb-2013: Omega Pharma – Quick-Step Cycling Team knew it had to do its best to protect Mark Cavendish in the crucial Stage 5 of Tour of Qatar on Thursday, and the team worked doggedly at the front to ensure he had perfect position for a third straight victory, and the sixth win for OPQS in 2013 in three different disciplines.

Cavendish extended his GC lead by winning a second intermediate sprint earlier in the stage, and then it was up to OPQS to bring breaks back and guide him to a potential “threepeat.” Niki Terpstra played the role of the “anchor” in a three rider breakaway that escaped shortly after Cavendish won the intermediate sprint, minimizing the gap and allowing his teammates to chase. The trio of escapees were brought back with 14km to go. Then, OPQS had the entire team in command of the front inside the final 10km. They guided Cavendish up the left side inside 5km, and with 3km to go, riders like Guillaume Van Keirsbulck, Matteo Trentin and Zdenek Stybar were all over the front. Iljo Keisse, Martin Velits, and Stijn Vandenbergh were also in support of the Manx Missile.

Cavendish still had three riders guiding him inside the final kilometer. Niki Terpstra was his last man standing, and, despite other leadouts trying their best to establish better position, Terpstra gave it everything and provided Cavendish an ideal set up to accelerate for the victory and extend his GC lead to 15 seconds.

“The team did this after riding for me the whole day,” Cavendish said of the great leadout work by his teammates. “The last two days of course we wanted the big commitment, but we really got out the unit today. We just rode incredible as a unit.”

Cavendish said the race was not as easy as it looked.

“Even mild winds here on this circuit causes some problems,” Cavendish said. “We knew it would be stressful today. It caused a few splits but we always had five or six guys riding for me. The protection was spot on. As for my spot in the final, we really kept together. Some other teams tried to take over – I think they got some confidence in the last few days. But my entire team came to me in the last minute and we just went.”

Cavendish also dedicated the victory to OPQS owner Zdenek Bakala for his birthday!

“We knew if we got through today it would be easy tomorrow,” Cavendish said of the GC lead. “Also, it’s Zdenek Bakala’s birthday today. What’s better than you getting a victory from the team? It’s a great birthday gift for him I think.”