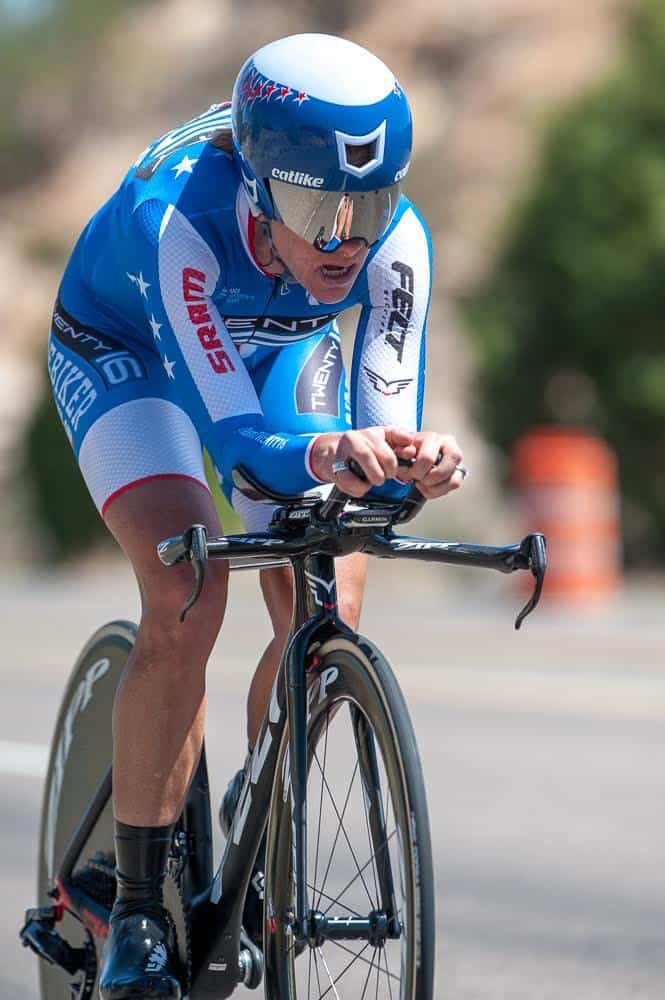 Conditions for stage three were typical of Tour of the Gila. Wind from the southwest picked up as the day went on, reaching 29 mph with gusts up to 45 mph by 3 pm and temperatures reached the high 80’s by mid-afternoon, testing the abilities of even the top contenders, already challenged by the Gila’s notorious elevation. Armstrong has this to say about the weather:

“Today’s conditions were quite a bit different from 2012 when I set the record and so I had to just fight through it. I knew what my turn around split had to be to break the record again… But, that’s what’s so intriguing about the Tour of Gila. You never know what you’re going to get,” she said.

Starting in reverse overall standing order, the men’s field set off for the 16.15 mile time trial at 9:15 a.m. Tom Zirbel won the men’s time trial, setting the time to beat at 34:29.

“This is a special race for me. It was my first real big win as a Cat 3 back in 2004, so I put everything I had into it that year and it kind of showed me I could compete with the best around. I love the desert, and I love the work that Jack [Brennan] does every year with this race. I would love to go out with a win,” said Zirbel, who is in his last year of professional cycling.

“Me and Matteo [Dal-Cin] are sixth and ninth on GC and less than a minute off the podium,” Cataford said before the stage. “We’re hoping to make it into third or better overall, so that’s really the goal for today.”

Cataford’s strong finish moved him into second in the overall classification ahead of Rob Britton (Rally Cycling). Neo-pro Neilson Powless rounded out the podium in third today and moved up seven spots in the GC classification.