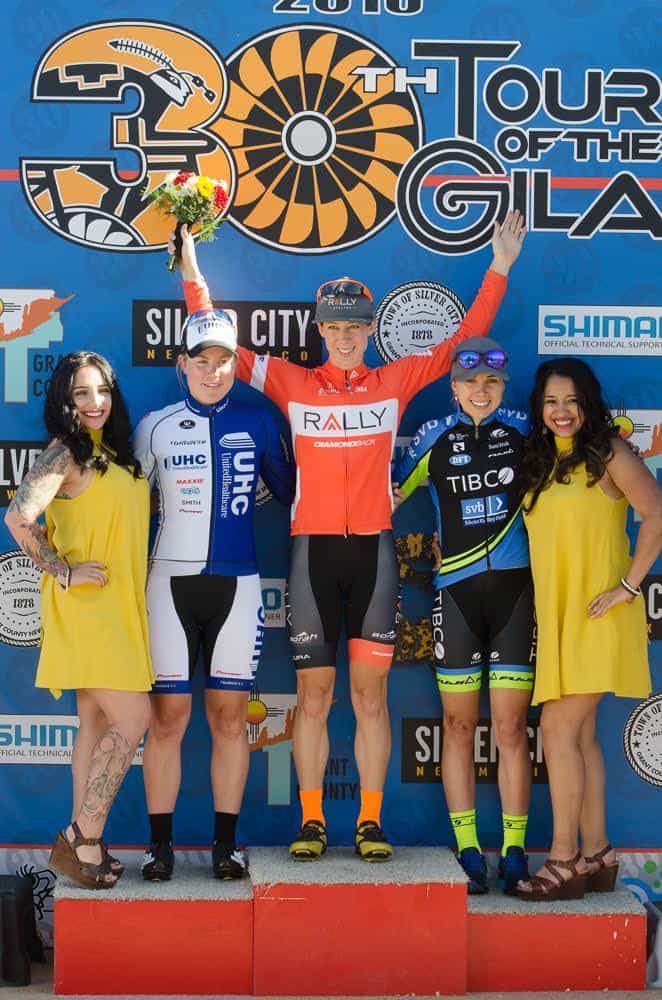 It was a festive atmosphere in Silver City today as cyclists and spectators filled the streets for the Downtown Silver City Criterium, the Tour of the Gila’s fourth stage.

The women’s field lined up at 3 p.m. for a 27-mile journey around the traditional four-corner circuit. The 25 lap circuit was an aggressive race to the finish and there was stiff competition between the top female riders, with Linda Villumsen (UnitedHealthcare), Emily Collins (Tibco-Silicon Valley Bank) , Brianna  Walle (Tibco-Silicon Valley Bank), Alison Jackson (Twenty16-RiderBiker) and Fischer battling for the top spot. Fischer sped to the to the top spot in the final lap, passing Tibco rider Walle, who rode aggressively throughout the criterium to move up in the general classification. This was Fischer’s first UCI road stage win.

“The final lap they kept it pretty fast. I had a good teammate up there, Kirsti Lay, who was following people who were trying to get off the front. There was one major attempt made by Scotti Wilborn, I think it was maybe the second to last turn. I kind of let go and I kind of followed the Tibco train into that final corner and went a little bit later and was able to take over,” Fischer said.

Villumsen and Collins rounded out the podium in second and third, respectively.

Kristin Armstrong (Team Twenty16-Ridebiker) and Mara Abbott (Amy D. Foundation) stayed at the front of the pack to maintain their spots in the general classifcation.

The men lined up immediately after the women’s finish for their 40-lap journey on the historic downtown circuit. Tom Zirbel rode solo off the front for the first part of the race doing work for Rally Cycling. With 17 laps to go on the men’s side, still no breaks had been successful so far. Team Jelly Belly Pro Cycling p/b Maxxis kept Lachlan Morton safe in the front as the field began to spread apart, coming together again at seven laps to go. Logan Owen set the fastest lap of the day at 2:07 with two laps to go.

The consummate professional, Eric Marcotte (Jamis), made his trademark move taking it down to a corner with the razor sharp precision and control that only a seasoned crit racer could manage. Marcotte stood atop the podium for the day’s stage win, followed by Travis McCabe (Holowesko-Citadel) in second and Kristopher Dahl (Silber) in third.

Lachlan Morton (Jelly Belly) retains his spot in the overall.