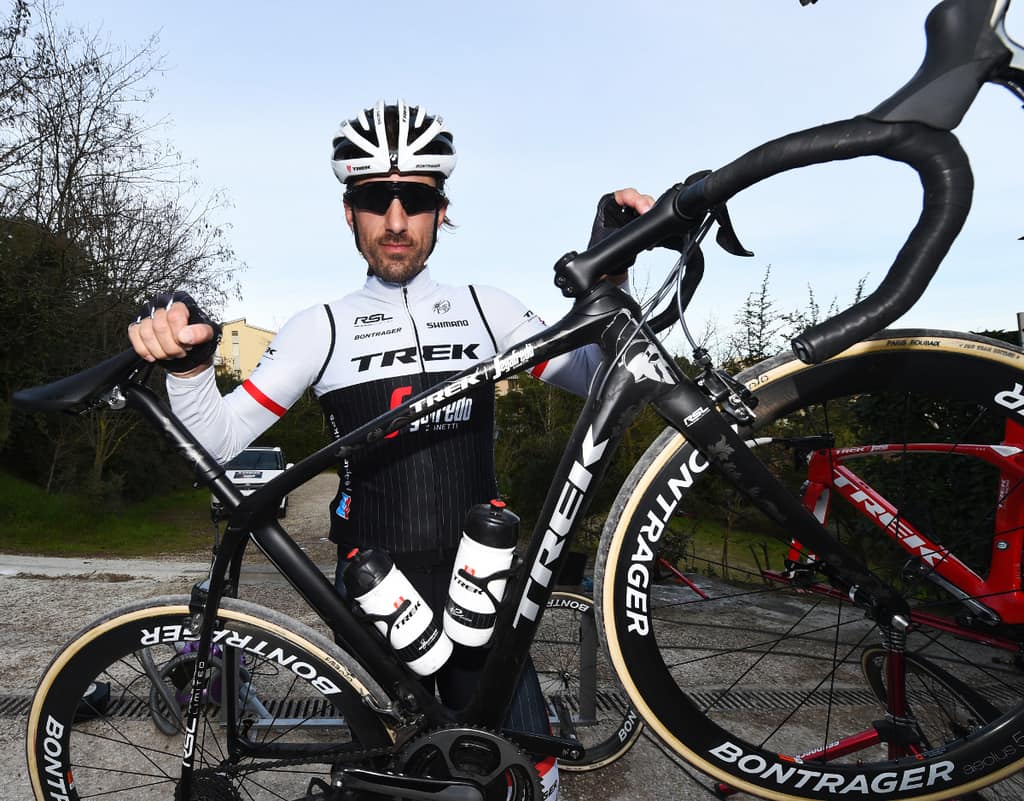 “Hole!” comes the warning from the front of the pack on the Saturday morning Montrose group ride. As usual, the imperative to act on such a warning depends on two things:  1. the severity of the hole, and 2. the squeamishness of the person calling it out (some riders freak out over a twig!).

Not that I would normally ignore the warning, but today I was aboard the new fully suspended Trek Domane that not only features adjustable rear travel with their vaunted Isopseed decoupler system, but now they’ve craftily designed in a similar system for the front end as well.

Yes, you read that right – fully suspended – just like a modern mountain bike. Well, actually, not exactly like the dirt bikes because they use telescopic suspension and that is not what the Doman relies on. Still, “suspension: is a word that’s applicable, and  it’s also a word that Trek has gone out of their way to avoid when talking about the Domane, but one that simply applies to the bike.

“Suspension is the system of tires, tire air, springs, shock absorbers and linkages that connects a vehicle to its wheels and allows relative motion between the two.[1] Suspension systems serve a dual purpose — contributing to the vehicle’s roadholding/handling and braking for good active safety and driving pleasure, and keeping vehicle occupants comfortable and a ride quality reasonably well isolated from road noise, bumps, vibrations, etc.”

What terms does Trek prefer when describing the benefits of their Isospeed decoupler? “Dissipat(ing) vibrational energy”

THE BIG DIFF
In an impressive coincidence, back in 2012 Fabian Cancellara lined up for Strade Bianche aboard a (then) new Domane and promptly rode away for a big win in the bike’s professional debut. We just happened to be in Belgium that week and had the chance to ride the bike – here’s our 2012 Domane ride review.

As heralded as Trek’s mighty Domane has been since it first showed up in 2012, there has always been one universal critique owing to it’s noticeable increase in rear end compliance with their proprietary Isospeed decoupler technology: imbalance.  In short, the bike had an uneven ride quality over the rough stuff between the suspended rear end and the unsuspended front end.

For 2017 Trek has come up with a fix by using a front end version of the Isospeed system, creating in effect, a high performance, full suspension road bike. Novel eh? Although in the rumor mill for the last year, it wasn’t until Fabian Cancellara parked his bike after winning this year’s Strade Bianche that certain, telling frame details came to light on his blacked-out bike. The seat tube was split and there was a bulbous shape to the head tube that was not found on previous models.

WHAT IT’S ALL ABOUT
As new model launches go, this one was in typical Trek tradition, we received a cryptic e-mail message two weeks ago, “Look for a bike showing up soon.” Sure enough, with zero fanfare or any direct communication, a bike box from Wisconsin showed up and inside was a sleek black and blue Project One Domane along with a thumb drive of technical details. Although the bike had already been proven a winner at the Strade Bianche, this was of course all taking place in the days leading up to the Tour of Flanders.

Between the new front-end use of Isospeed and the now adjustable rear Isospeed, this bike represents a really big (huge?) step in new compliance/performance technology. Surprisingly (and thankfully), it was striking to see a bike that offered so much in terms of technical advances that look so, well, un-technical. Trek wisely skipped the chapter on “typical bike industry methodology” that calls for an over abundance of  marketing graphics and silly acronyms calling out the front and rear Isospeed systems.  Stealthy is good.

What Trek Says: “Trek’s problem statement was thorough. Devise a system solution or component solutions that produces customizable comfort which accounts for various human body types, a broader range of bike fits, and will allow a rider to achieve a greater comfort-inspired experience compared to the first generation Domane.

“In a seven-month period, 33 ideas were brainstormed and three frames, two forks, and two handlebars were fabricated for proof of concept before the production project launched.

“In the test lab, vertical stiffness testing at the saddle shows that for a 56cm frame, the compliance ranges from approximately 99N/mm to 144N/mm throughout the slider’s adjustment range.”

WHAT ABOUT THE FRONT END?

What Trek says: “The aim of front IsoSpeed technology was to utilize the frame’s rear technology and apply it to the front end of the bike by isolating the steer tube of the fork to allow a rotational degree of freedom in the fore and aft direction. To help increase damping characteristics of the front end, a specially design upper head tube system was designed to allow this fore and aft degree of freedom for the steer tube to properly flex.”

According to Trek, what the new design provides is a 10% increase in compliance over the previous Domane.

WHAT TO EXPECT
The Domane will be available with both caliper and disc brake options (the latter using front & rear 12mm thru-axles). The caliper bike allows for up to 28mm tires while the disc frame has room for a 30mm tire. All Domane frames have hidden fender mounts and a Control Center compartment  in the down tube that is accessed through the bottle mount to access Shimano Di2 batteries.

Our test bike was outfitted with a Shimano Dura Ace drivetrain with dual-mount brakes. How did the bike ride in our initial test runs? Click Here for our Domane Ride Review.