TWEET OF THE DAY: MARK CAVENDISH EXPLODES AT MECHANIC

Some choice words ahead of stage 19 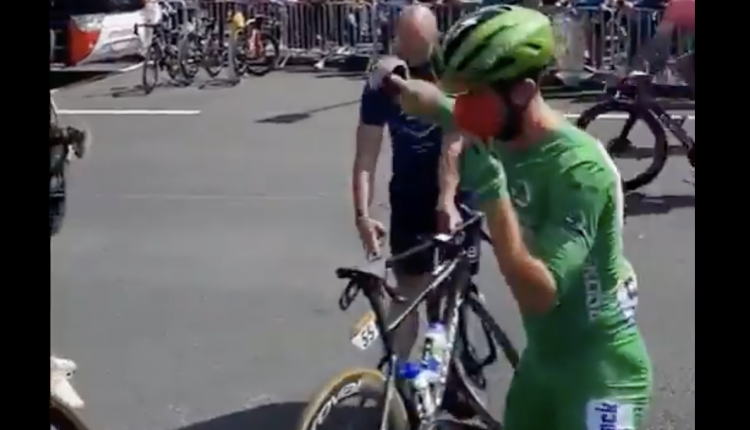 Mark Cavendish had some not-so-nice words for his mechanic as he prepared for the start of stage 19. In the midst of his comeback to the top ranks of WorldTour sprinters and favored to win the stage, Cavendish screamed in anger “Sort it out now” followed by some choice expletives that could be heard from outside the Deceuninck Quick Step team bus after he stormed in.

After Matej Mohoric won the stage out of a breakaway, spoiling Cav’s chance to break the Merckx record, Cavendish apologized online.

“During a day of the Tour de France, as riders we are put in a perilous situation and I wanted my bike to be perfect, in order to help me stay safe,”  he wrote on Instagram later Friday.

“My bike had some problems when I got on it this morning. Despite this, I should not have reacted in the way that I did and not so publicly.

“I’ve been extremely close friends with my mechanics for over a decade and they’ve worked tirelessly to ensure I’ve always been safe and successful.

“Although they know how short I can be when I’m stressed, no-one, especially those you care about, deserve to have a voice raised to them.”

Cavendish would have set a new record of 35 Tour de France stage wins with his fifth win on the 2021 edition on Friday.  He has already equalled Eddy Merckx’s 46-year-old record. But an early mass fall and lack of will from other teams to stop a  breakaway allowed a large group to build up a big lead over the main pack.

“I still have Paris,” he said of Sunday’s sprint finish on the Champs-Elysees.

“And I still have the jersey,” he said as he stepped down from the awards ceremony in the sprint points leader’s green tunic.

Cavendish was a late inclusion on the Deceuninck team roster but has won four stages on the 2021 Tour with a fifth possible on Sunday when the race winds up in the French capital.