We put two titanium steeds up against each other 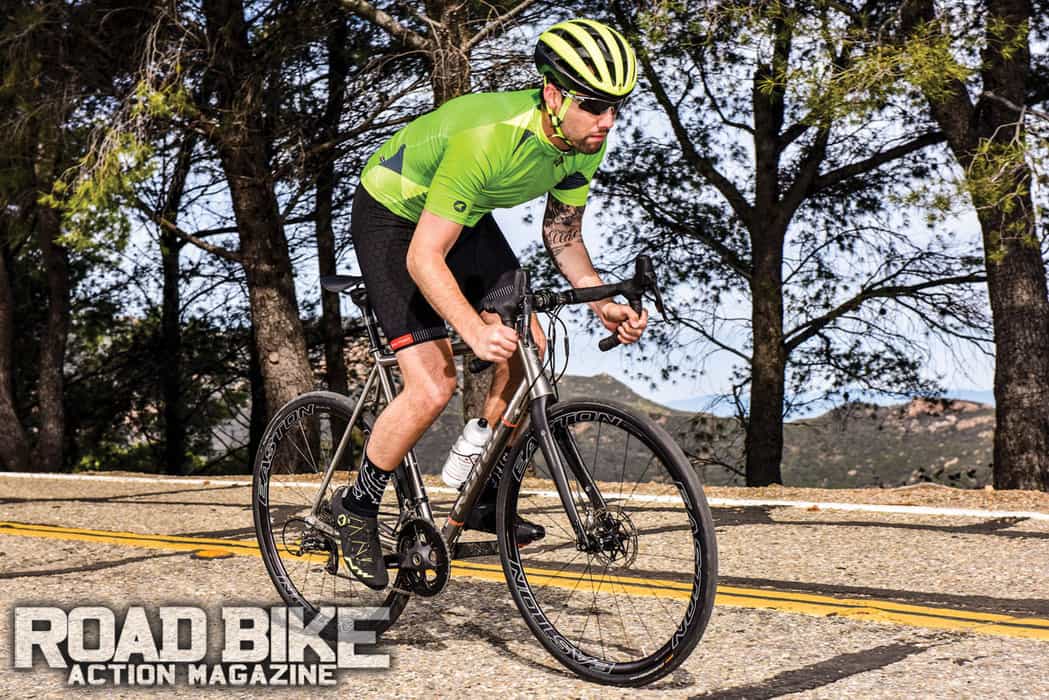 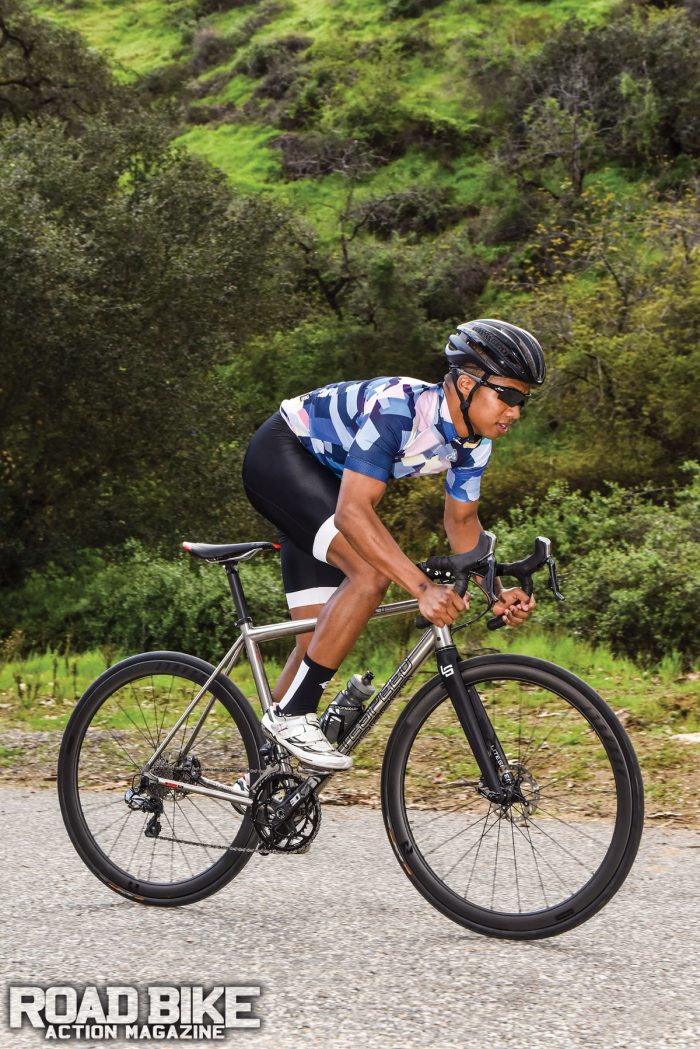 Titanium bikes have been around for decades now. There was a time when they were thought to be the lightest, most durable, elegant, refined, exclusive and expensive frames to be had. No more. Although the reputation for being durable still stands, and they can still be expensive, as we all know, carbon fiber has since ascended to the top of the expensive-and-lightweight perch. But where both aluminum and steel have fallen out of popular favor for high-end bikes, titanium frames remain a steadfast choice for many cyclists who appreciate everything from the Ti aesthetic to the material’s oft-touted durability and ride quality. 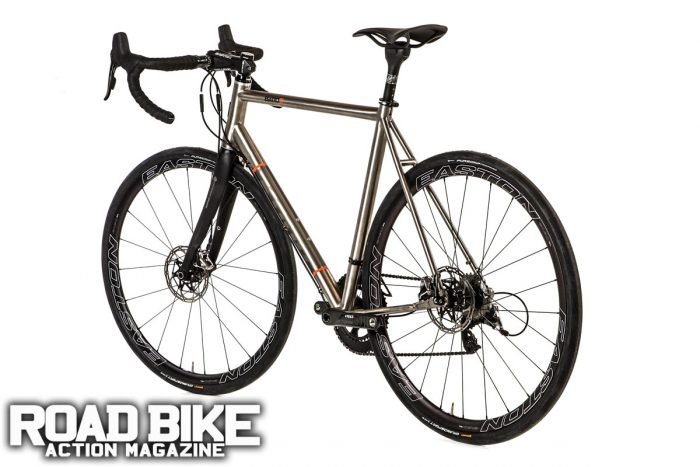 Both Litespeed and Kona have been selling titanium bikes since the late ’80s. Litespeed (in addition to Merlin Metalworks) is a name best associated with the accolade of “pioneer” in the world of titanium frame production. Having never made their own, Kona has nonetheless sourced Ti frames from the best factories. Coincidentally, for the Esatto bike tested here, Kona chose the Tennessee-based Lynskey factory for the build—the Lynskey name, of course, being the family that first opened Litespeed. Oh, what a small (titanium) world!

And as much as the durability and ride quality have continued to keep titanium a popular frame material for road bikes, they have also helped make titanium a smart frame choice for the burgeoning world of mixed-surface/gravel riding. What we have here are two takes on a titanium road bike, but whereas the Litespeed is a traditional road bike, the Kona is keen to affix the “adventure road” tag to its design.

While a sense of adventure has never been alien to road cycling, the market segment referred to as “adventure bikes” has become popularized of late, owing to the industry’s interpretation of the different and more varied ways that people are now using their bikes. At its most simple, the adventure bike can be viewed as the modern-day hybrid bike that’s designed with certain enhanced capabilities for more mixed-surface riding.

KONA: Owing to their history of building both cyclocross and mountain bikes, Kona is a brand that can certainly lay claim to an experience of building bikes for mixed-surface use. While mixed surfaces have been a hindrance in the past for most road bikes, with the bloom of adventure bikes in recent years, there aren’t many excuses to not explore the roads less traveled anymore. Kona developed the Esatto as a do-it-all adventure bike that will take riders just about anywhere. 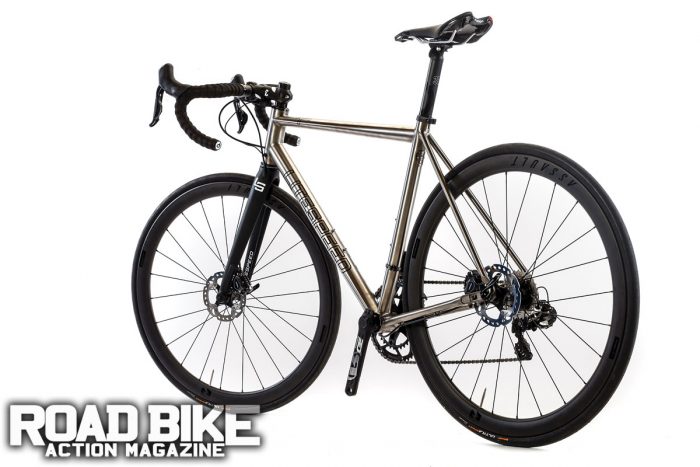 LITESPEED: Now celebrating 30 years of Tennessee-based titanium frame production, Litespeed can boast of producing American-made frames longer than many bike brands have been importing frames from Asia. As such, Litespeed is a company that needs little introduction. Last year we tested their T1sl, which gave us a fresh perspective on performance titanium frames, proving that Ti isn’t a metal of the past. The T2 Disc is new for 2017 and brings the performance of their higher-end frames to a more budget-minded (but still pricey) rider.

KONA: The Esatto was designed for all-day riding on whatever type of road a rider would want to conquer (shy of hard-core off-road) with the unique ride quality that titanium has to offer. The design of the Esatto is straightforward with its external cable routing and a threaded bottom bracket shell, along with eyelets for the fenders and racks. There are a couple versions of the aluminum Esattos available ($999–$2099) to our Ti test bike (available as a frameset) with a carbon fork. Kona uses 15×100 front and 12×142 rear thru-axles, along with flat mounts for disc brakes.

Titanium, of course, puts a very heavy focus on ride quality and durability. The 3AL-2.5V titanium Esatto frame is made by Lynskey Performance in Tennessee. The Lynskey name is the stuff of titanium legend, and kudos to Kona for choosing the family-run facility to produce the frame. The frame has a tall, tapered head tube and oversized downtube for better power transfer when pedaling hard out of the saddle. Kona built plenty of tire clearance into the frame, allowing up to 32mm tires and fenders. Up front is Kona’s carbon disc fork that has stout legs to absorb hard braking and chatter-bump forces.

The Esatto has a solid endurance geometry with a longer 102cm wheelbase aimed at mixed pavement rides and longer days in the saddle. The longer wheelbase provides stable handling on more technical sections of road. But also help keep the ride quality silky smooth.

The T2 disc uses 3AL-2.5V titanium for the top tube and downtube with massively oversized tubes to increase stiffness. Adding to the stiffness is a 12×142 rear thru-axle with ovalized seatstays to increase the ride quality but keep lateral movement to a minimum. The frame has some modern designs, including a machined PF30 bottom bracket shell like the same one used on the lighter T1sl frame. Our frame is Di2-specific, but external cable routing is optional. Thankfully, the T2 disc is up to date with the brake spec running front and rear flat-mount tabs.

KONA: The creative minds at Kona put together a unique build kit for us to test that included an 11-speed SRAM Red drivetrain and hydraulic disc brakes. The cockpit was Easton EC90 SL with their carbon EC90 SL 29er wheels with 32mm Continental Sport Touring tires and a Fabric saddle that fit most of our test riders.

Overall, our test riders were impressed with the performance of the build, but did have issues with the rear hub of the Easton wheels. Although these were a new and improved version, just as we encountered with the previous models, we had issues with a sticky freehub body that would bind the chain and consistently make freewheeling descents difficult.

LITESPEED: Our test bike came stock with a Shimano Ultegra Di2 drivetrain and hydraulic disc brakes. The gearing was a compact (50/34) crank with 11-28 cassette in the rear. Litespeed offers the T2 disc with Mavic Ksyrium wheels, but spec’d ours with the Reynolds Carbon Assault with 25mm Continental Ultra Sport. Wrapping up the build was a full-3T cockpit and Prologo saddle. Litespeed was kind enough to include a Rotor power meter with the bike to remind our test riders just how mediocre their numbers are.

KONA: With a 73-degree seat and 72-degree head tube angles, the Esatto exudes neutral and relaxed handling. The 17.5cm head tube height that looks more like a 1/8th-scale skyscraper than tubing on a bike frame. We ran a slightly longer 110mm stem with the stack height dropped all the way. Our test
riders were impressed with the fit of the Kona and felt more than comfortable during long days in the saddle.

If there is one word to sum up our experience on the Esatto, it would be “fun.” This bike felt limitless in providing a quick-rolling ride on pavement that transferred easily to fire roads without blinking an eye. The titanium mixed with the 27.2mm seatpost and oversized 32mm tires gave our test riders a very smooth ride with more than enough vertical compliance.

The Esatto isn’t a bike that will aggressively lurch forward when pedaling hard out of the saddle, but, instead, will respond smoothly and maintain a steady pace. Descending and cornering the frame felt stable and didn’t stray from aggressive lines whether on the dirt or pavement, although the slick tires made cornering on pavement a bit more confidence-inspiring.

LITESPEED: When we tested the T1sl, our test riders found the machine to be snappy and playful with a versatile geometry and ride quality. After just a few rides our test riders could feel bits of that design come into play with the T2 disc. The fit was easy to dial in, our test bike came with a zero-offset seatpost, which left some riders longing for more setback and power positioning. We ran a 100mm stem with the stack height dropped all the way. We tested a size M/L, which translates to roughly 56cm. Most of our test riders hover between 5-foot-9 to 6 feet tall and felt that the geometry was versatile enough to suit the range of heights.

The T2 disc has similar ride characteristics to its T1sl big brother, with light handling that feels stable and fun, especially at high speeds and technical descents. On rough sections of pavement, the T2 disc was compliant and proved why titanium is such a unique riding experience. Out of the saddle the stiff bottom bracket and oversized downtube responded and allowed the bike to accelerate quickly. Up front the oversized head tube provided our riders with a stiff and stable ride, whether descending or pedaling out of the saddle.

We used the Litespeed on both longer endurance days in the saddle and shorter, harder interval rides. The geometry (with a 100.5cm wheelbase) felt versatile enough to handle whatever style of riding we could toss into the mix. We had a couple of rides on mixed surfaces and were pleasantly surprised with the stable handling.

KONA: Overall, we were impressed with the wide breadth of the Esatto’s abilities and wouldn’t mind having one in the stable. Of the minor gripes we had, one was the use of a 15mm front thru-axle. Sure, bigger is stiffer, but the tide has turned to the eventuality of a 12mm standard. Also, the frame decals did little to exude the luxury of a titanium frame. Instead of a clean finish, they looked like they had been put on with a cheap glue stick. Aesthetics aside, the Esatto is a fun bike to ride and will roll on just about any surface the riders are willing to go the distance.

LITESPEED: Of course, with the explosion in carbon fiber frame production, titanium has been struggling to stay relevant the last few years. Yes, Litespeed makes carbon frames too, but they have maintained their titanium frame production for two key reasons: they know how to do it, and they correctly believe that titanium is still very relevant with bikes designed around performance riding. The T2 disc is a less-expensive take on the lightweight T1sl, but it still has plenty of performance and personality packed into the design.

As we all should know by now, titanium is more than a novelty. Heavier still than carbon, but the quality and versatility of the material is still plenty relevant in this age of the modern carbon superbike. With these two bikes we have designs that, while similar in many ways, still speak to different audiences.

From the tall head tube, bigger chainstays and machined chainstay yoke for increased chainring clearance, the Kona frame seems the sturdier of the two and, when combined with the longer wheelbase, is a bike that would better suit anyone with true mixed-surface intentions.

Though the Kona gets marks for a price that’s $1000 less than the Litespeed, to the discerning eye, the Litespeed has frame details that speak to a higher level of handiwork. The Litespeed definitely has a more svelte profile and elegant feel to it. The internal cable routing, bridge-less seatstays, polished finish and shapely top tube all speak louder to the classic road enthusiast.

While these two bikes represent the spectrum of titanium machines that are each willing to go the distance, in the end, the overall look and feel of the Litespeed won over the majority of the road-inclined test riders.