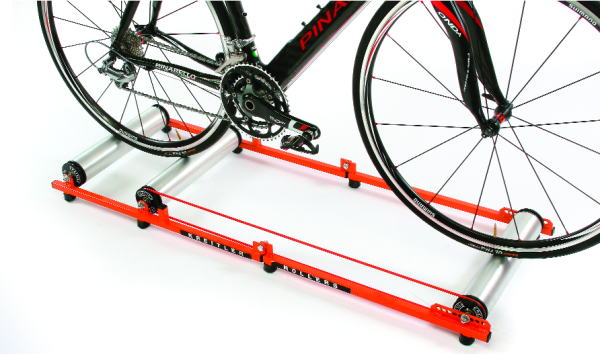 There are two groups of cyclists: those who can ride rollers, and those who secretly wish they could. ‘Rollers.’ The mention of rolling stationary trainers today typically elicits sarcastic sneers from cycling’s new-school elite, or a blank stare from those who have never even seen a set of rollers, much less used one. Rollers are three rolling drums that spin on a metal stand; the rear wheel drives two drums and the front wheel balances on the third. A belt from the rear drum drives the front wheel to maintain balance and inertia. Riding rollers is like riding a smooth, 15-inch-wide treadmill that perfectly matches your speed and cadence-and you have to balance, just like riding the road. While many would argue that being firmly bolted to a ‘wussy-boy’ training device allows an athlete to devote every effort to cardiovascular training, nothing could be further from the reality of the road. Cycling, especially competitive cycling, requires smoothness, balance and the ability to hold a line-effortlessly, and all this while calculating the next move. Only rollers can teach these skills indoors. This month we look at two different rollers: Kreitler and E-Rollers.

l Kreitler is this country’s first name in rollers-that’s what they make-and they are named after Al Kreitler, whose effigy, wearing his welding helmet and with electrode in hand, once graced every set. Sadly, Al has gone west, but the company he founded has been relocated to Grand Junction, Colorado, and now ‘Killer,’ the tiny Yorkshire Terrier who watched the world go by from Al’s overalls, is on the company logo. Like Al, Kreitler makes no overblown claims about its products-they just make good stuff and sell it at a fair price. Kreitler’s Kompact Challenger rollers cost $399 and are the subject of this product test.

TECH
Kreitler Kompact Challenger rollers are foldable, which, due to their already low-profile design, means they can be stored in a closet or even under the bed when you are done with your workout. The frame is welded rectangular tubing, powder-coated Kreitler Orange, with rubber-tipped legs. The 15-inch-wide ‘drums’ use molded plastic ends instead of the machined-aluminum ends that grace Kreitler’s top-line units. A high-quality urethane belt connects one rear drum with the front and there are a series of adjustment holes that allow the rollers to adapt to the entire range of road bike, and most mountain bike, wheelbases. Kompact Challenger rollers are well built, a snap to assemble and to get up and running, and they are copied around the world.

THE EXPERIENCE
We left the Kompact Challengers set up alongside a conference table in the Road Bike Action offices to attract bike-curious candidates for a first-time roller experience. It took about four tries for riders who had previous roller experience and two more for those who never attempted the feat in their lives. Every taker made note that, while there was no resistance device attached to the Kreitlers, each was treated to a rigorous workout. The first-timer routine was to balance using one hand on the table and the other on the flats of the handlebar near the stem. Once up to speed and in control, the rider concentrates on a spot about ten feet ahead and remains on the flats until he gets a feel for it. After two or three sessions, it was possible for almost every candidate to spin at sprinting rpm in the drops without wobbling off the stand. If you do make a mistake and ride off the side of the roller, the bike stops instantly and the rider simply puts out a leg as if he or she was stopping at a traffic light and got a little out of shape.

RBA SAYS
If you don’t possess or desire to practice the balancing skills required to ride a 15-inch-wide line, Krietler sells a bolt-on adapter that clamps to the bicycle’s fork. Want a more vicious workout? Kreitler sells air-turbine and electromagnetic resistance enhancers that bolt onto the rear of the roller frame and are driven by a second, smaller belt. As you may have figured, Kreitler’s rollers, when paired with any of their options, offer unparalleled versatility for early season training.

E-Motion rollers were designed by Larry Papadopoulos, the head honcho at Inside Ride, to insure that anyone who can ride a bike can safely ride rollers. Motivated by the long and dark Oregon winters, he created rollers that move fore and aft on a track to produce a more realistic-and safer-roller experience. Larry likes to refer to the E-Motion rollers as not a thing to ride but rather a place to ride.

TECH
The E-Motion rollers come assembled and include a 5/8-inch wrench for adjustments. The rollers are driven by a standard urethane belt with a special tensioner, and the machined-aluminum drums are three inches in diameter, 16 inches wide and run on sealed cartridge bearings. The inner and outer frames are made from aluminum. The outer frame is powder-coated black and the inner frame is anodized gold. The roller assembly is mounted to the inner frame, which slides on tracks inside the larger outer frame. Elastic bands keep the inner frame centered, while allowing the bike to slide naturally forward and back, reacting freely to the movement and mass of the pedaling cyclist. The floating action of E-Motion Rollers is the key to this trainer’s ease of operation, but additional safety features were added to assuage any lingering doubts. Stop bars on either side of the rear wheel prevent the bike from jumping off the rollers and a pair of skate-board wheels to the right and left of the front wheel prevent the E-Motion roller rider from steering off the side of the rollers in the heat of a sprint. E-Motion rollers are non-folding, but weigh only 30 pounds, so they are relatively portable. Each set of rollers is ridden at the factory to be sure there are no vibrations before releasing them to the buyer. Those who want more resistance for their workouts can order a custom magnetic resistance unit with four different settings.

THE RIDE
Becoming familiar with the E-motion rollers takes about 30 minutes for a beginner and much less for an experienced rider. Once you are riding, the feeling quickly becomes natural. Granted, it takes some experience to trust the rollers, but whatever one is capable of doing on road can be done on E-Motion rollers. Go ahead, grab that water bottle. With the natural feeling of the E-Motion system, it is nearly impossible for an experienced rider to fall off. We found that we could sprint-not just a controlled sprint, but an all-out, head-down, throwing-the-bike-side-to-side sprint-without getting ejected. Rollers can be noisy, but E-Motion has silenced theirs to the degree that a downstairs neighbor may not notice you are preparing for the Beijing Olympics.
The downsides of the E-Motion roller is that the double frame system will not adapt to uneven surfaces-and the fact that it does not fold makes it tough to bring your rollers to races for warm-up and cool-down duty unless you own a large vehicle.

RBA SAYS
Albert Einstein stated: ‘Things should be made as simple as possible, but not any simpler.’ E-Motion rollers have a lot more working parts than conventional types, but using the sliding system is simpler and safer-and a lot more fun to use. It’s sort of like having a piece of the road right inside your home.
Price: $795
Contact: www.insideride.com

THE ROLLING CONCLUSION
The benefit of roller training was immediately noticed on the RBA ‘lunch’ rides. Those who had spent even minimal time on the developed a smoother, faster cadence and held a markedly straighter line in the peloton. The real-time training that rollers provide encourages a relaxed posture on the bike that few enthusiasts possess. Due to low levels of anxiety, most riders carry unnecessary tension in their muscles, which wastes incredible amounts of energy. To succeed in riding rollers, all but the muscles that propel the bicycle must be relaxed and fluid-this unlocks wasted energy, and is the secret advantage of training on rollers.