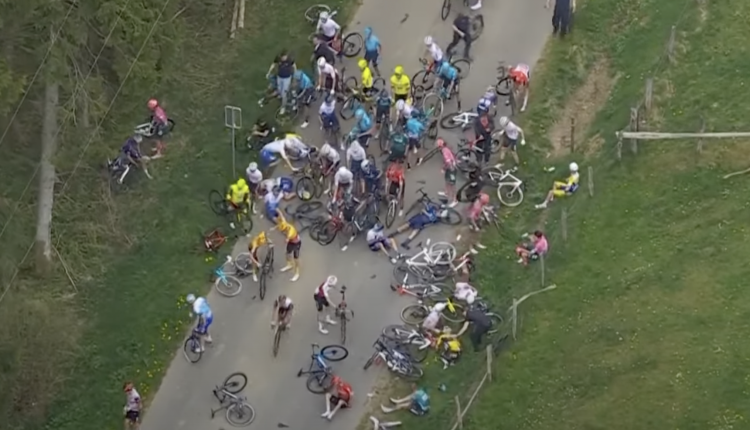 Following multiple injuries from a mass-crash during the Liege-Bastogne-Liege race, world champion Julian Alaphilippe will be kept under prolonged observation in a Belgian hospital, his Quick Step team said Tuesday.

Alaphilippe suffered two broken ribs, a broken shoulder and a collapsed lung after being caught in a spectacular crash that propelled the double world champion down an embankment and into a tree.

“The complexity of his condition means that a period of further observation will be required before a recovery pathway can be decided.”

There was also a discouraging prognosis for Alaphilippe’s teammate Ilan Van Wilder, who broke his jaw in the same crash.

“Unfortunately, the nature of the injury and procedure means that he will be unable to take part in the upcoming Giro d’Italia,” the medical bulletin said.

In the wake of the crash French rider Romain Bardet called upon the peloton for renewed respect.

“I’m thinking of Julian and all thoe guys who saw their life flash before their eyes as screams and crunching metal replaced the whistling sound of the peloton because someone jostled for position at 40mph,” Bardet said. Quick-Step are no strangers to nasty accidents.

Remco Evenepoel, who won Sunday’s Liege-Bastogne-Liege, had a brush with death when he plunged over a wall and into a ravine at the 2020 Tour of Lombardy. Fabio Jakobsen lost all his teeth and came close to dying when he was sent flying into a lamp post on the 2020 Tour of Poland. Evenepoel and Jakobsen both needed over a year to approach road fitness again.