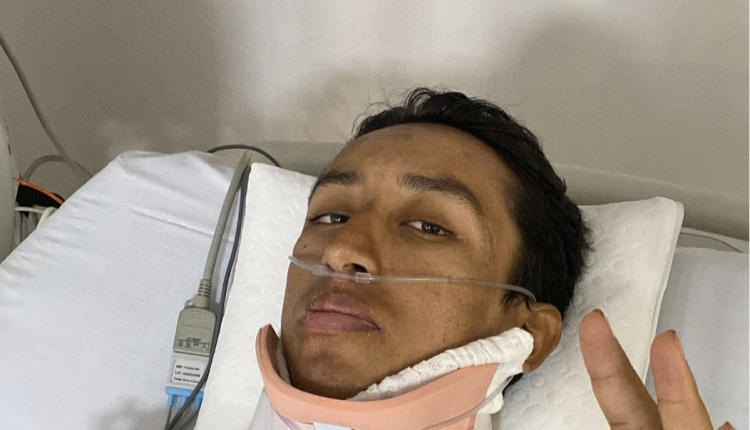 Former Tour de France winner Egan Bernal said on Friday, in his first comments since crashing into a bus, that he was lucky to avoid being left handicapped. The 25-year-old Colombian underwent two surgeries on multiple injuries to his spine and legs following Monday’s accident while training in his homeland. Pictures shared on social media of the accident’s aftermath showed that Bernal hit the back of the bus so hard that he put a dent in it.

“After having had a 95 percent probability of being left a paraplegic and almost lost my life doing what I love the most … today I want to thank God,” Bernal wrote on Instagram alongside a photo of him lying in bed wearing a neck brace. He also thanked the doctors who operated on fractures to his vertebrae, kneecap and thighbone. Bernal said he would remain in the intensive care unit at the Universidad de La Sabana clinic just outside Bogota awaiting further surgery. The clinic said the reigning Giro d’Italia champion would soon undergo more surgery to repair fractures in his hand and mouth.

Bernal was riding a time-trial bicycle while training alongside Ineos Grenadiers teammates just outside Bogota. Traffic police said he was “so focussed” that he did not hear warning shouts from his teammates that the bus in front of him had stopped. Bernal was due to begin his 2022 season on February 10 at the four-day Tour de La Provence ahead of an expected attempt to regain the Tour crown he won in 2019.

SHEFFIELD LEADS TOUR OF DENMARK WITH ONE STAGE TO GO

BERNAL WILL RETURN TO RACING 7 MONTHS AFTER ‘NEAR DEATH’ CRASH