Spanish veteran Alejandro Valverde suffered a broken kneecap in a crash that knocked him out of the Tour de France on Saturday, his Movistar team said. Valverde’s departure is a blow to Tour contender Nairo Quintana’s chances as he was due to help the Colombian Movistar leader in the mountains.

The 37-year-old Valverde, who was third overall two years ago, came down hard on a slippery bend in miserable wet conditions on Saturday’s opening stage 14km time-trial. “The Murcian hit the ground at great speed and crashed straight into the barriers, (and was) incapable of continuing the race due to his great pain,” said Movistar. He was taken to a hospital in Dusseldorf suffering from a blow to the ribs as well as cuts. “A first test confirmed he had broken his left kneecap,” added Movistar. It is the third time Valverde has had to pull out of the Tour following his failure to finish in his first two participations in 2005 and 2006.

Valverde seemed to jar his left leg when he touched his foot down as he lost his back wheel on the slippery corner, before skidding hard into the metal crash barriers. It was immediately clear he was in great pain and wouldn’t be able to continue, but his team frantically tried to move him as he was stranded on the apex of a tricky bend, with many other riders set to come around it. Valverde was expected to play a pivotal role in helping twice runner-up Quintana in his bid to defeat reigning champion Chris Froome during the Tour’s mountain stages.

He wasn’t the only rider to crash badly on the opening stage as compatriot Ion Izagirre also left the race while Frenchman Tony Gallopin was amongst several other riders unseated. Briton Geraint Thomas won the stage and will wear the leader’s yellow jersey on Sunday’s second stage from Dusseldorf to Liege in Belgium. 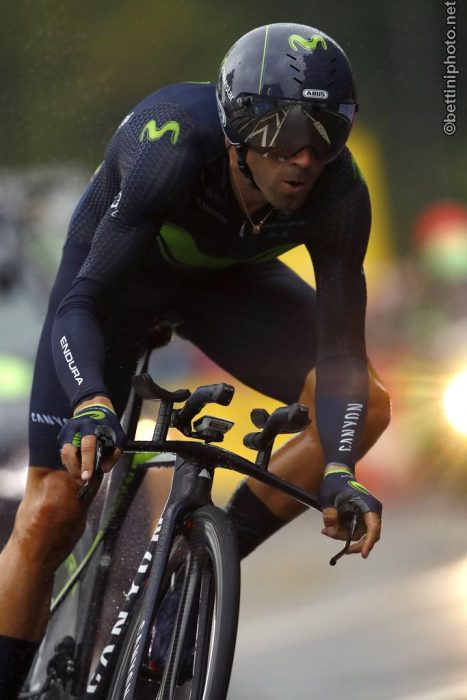