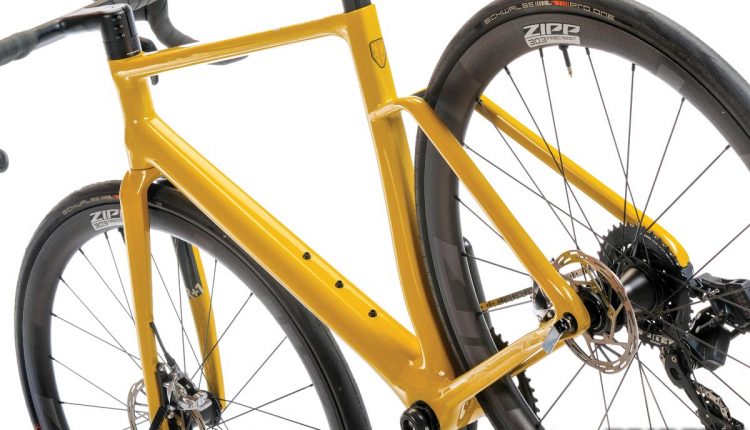 There are few relationships with the strength and bond of a father and son. So, when industry veterans Ian and Trevor Hughes decided to create a business partnership in 2017, their Vielo brand was already leaps and bounds more prepared to succeed. Ian had been working in the UK bicycle scene for many years with history at Marin, Scott, and more recently the importer of Storck, Lightweight and Sarto for the UK. Between Ian and Trevor, they have almost 40 years of bike-industry experience between them.

Yes, the Vielo is a strange bird indeed. The R+1 was designed to utilize the advancements of 1x drivetrains without the UCI frame shape and geometry restrictions. The R+1 comes in two versions: the Alto (tested) with internal hose routing and the Strato that has semi-internal hose routing. The design is disc brake-specific and 1x-specific with the recreational rider in mind.

By eliminating the front derailleur, Vielo is able to implement a more forward, over-the-pedals rider position. This aids in driving power and helps open the rider’s hips. To further refine the structural strength and balance, the R+1 is symmetric at the bottom bracket. This frame design optimizes the normally void space needed for a front derailleur.

The most striking and visually unique aspect of the R+1 frame are the seatstays, which join the Kamm tail seat tube on a horizontal plane. After 10cm, they take the more traditional route down to the rear dropouts. The chainstays are only 40cm long, but there is still space for 32mm tires with room to spare.

At 61.5cm, the front-center to bottom bracket length is a bit long on our medium-sized frame that has a 14.2cm head tube. The fit might seem long for riders between 5-foot-8 to 6-foot-1 since there is a 40.1cm reach and 54.3 stack. Thanks to the forward fit, we had no problem essentially rotating our position forward a few degrees to maintain our body position. Overall, the 101.1cm-long wheelbase feels much shorter, thanks to the short rear end.

Owing to the 1x-specific frame design, the wider bottom bracket and frame around this area limit the compatible cranks. Vielo designed their own set of 1x chainrings (in 38, 40, 42, 44, 46, 48 and 50t sizes). They use a narrow-wide tooth profile, made of 7075 billet alloy with SRAM’s eight-bolt direct mount. Vielo says the chainring are optimized for the desired chain line when paired with SRAM cranks. Our R+1 has the top-tier Red hollow carbon arms paired with a 48t ring. In the back the SRAM Force AXS Wide derailleur is paired with their 10-36t cassette. SRAM Red AXS levers are hydraulic to the calipers and wireless to the rear mech.

The carbon Zipp 303 Firecrest wheels are 25mm-wide internal, tubeless-ready and have a hookless bead. A pair of tubeless 30mm Schwalbe Pro One tires are mounted along with a 140mm rear rotor and a 160mm up front. Vielo has designed their own one-piece handlebar/stem, called the carbon combo bar, which is comprised of an alloy stem that is bonded to the carbon bar. Vielo also specs their own zero-offset, carbon Kamm-tail-shaped seatpost with a Fabric flat carbon rail seatpost.

We aren’t going to lie, the forward fit took a few of our testers some time to wrap their head around. Many wanted to slide the saddle all the way back to the edge of the seat rail. After some experimenting, everyone adjusted their position appropriately and had no complaints. The forward position does transition a bit of the rider’s weight to the front, but even on longer rides, there was no issue since the reach was correct.

The 1x drivetrain is so simple and easy that it had many testers debating on why they still use the front mech. Of course, when trying to keep up in a fast-paced group ride, we did notice the larger gear gaps. This was during extended hard efforts where we were holding pace and position. When at the front, we seemed to always find an efficient gear.

The 48t chainring and 10t cog had us pushing the pace on the fast, open downhills. When things got technical while descending, the R+1 felt stable, but did need a bit more counter steering than we are accustomed to when leaning deep into a corner.

Climbing was where the R+1 really stood out. The forward fit helped keep us over the pedals and able to drive consistent power. The 48t chainring matched to the 36t cog was a little big for some and is equal to a 35t small ring on a SRAM 2x matched to a 26t cog. We would probably opt for a 44t chainring and get a bit easier gear for climbing.

Owing to its unique frame design, the Vielo was always the center of attention and debate. The R+1 was fun to ride, and the riding position had everyone debating their own current setup. The 48t chainring was a bit tall for some, but Vielo does provide a second chainring of your choice at no extra charge. This could be a handy option for those looking to do an event or tour that has a lot of climbing, while their home turf is relatively flat.

The geometry was comfortable, and with the 30mm tires ballooning out to 32mm, we had nothing but smooth rides. The internally routed hoses on the Alto keep the aesthetic clean, but the Strato might be for those that like to do their own maintenance. The only real limiting factor we found was compatibility with power meters. Essentially, the frame has been so optimized for 1x that the normal 2x power meter crank with 1x ring attached won’t fit because of its bulky spider. Pedals or maybe the SRAM Rival single-sided power meter would be the only options since SRAM has all but killed the hub-based Powertap. This UK father and son team have created a unique and modern option for anyone who doesn’t care about having the UCI’s approval and are willing to answer plenty of questions about a truly stand-
apart bike.

• A look all its own