Armee edged out Alexey Lutsenko and Giovanni Visconti in a time of 4hr
09min 39sec for the 169km ride from Suances to Santo Toribio de Liebana as the general classification favourites allowed an early 20-strong breakaway group to fight for the stage win.

“Today in the breakaway with 20 guys we had a big gap and I knew I was one of the 20 guys who could win the stage,” said Armee. “Everything has to come together and I managed to win because I had a really good last 15km. I was really strong there.”

Over 10 minutes back on Armee, Froome staved off a series of attacks in the chasing group with the help of his Sky teammates before accelerating himself in the final 600m to leave Nibali trailing. The Briton picked up 21 seconds on the Italian to stretch his overall lead with just two competitive days of racing to go before Sunday’s parade around central Madrid.

Froome is now a huge favourite to become just the third rider ever to win the Tour de France and Vuelta in the same year, and the first since the Vuelta was moved to after the Tour in the cycling calendar back in 1995. “As soon as I made an acceleration on the last climb, Wout Poels was straight on the radio saying ‘Nibali is dropped, keep going’, and I think that was exactly the result we were looking for today,” said Froome.

The four-time Tour winner had lost 42 seconds to Nibali on Wednesday as he paid for his efforts in winning the only individual time trial of the race a day earlier. However, Froome made amends as only Alberto Contador and Michael Woods could stay with his attack on a category three climb to the finish.

“Yesterday was a tough stage for me and it feels great to extend my lead again by 21 seconds to Nibali,” added Froome. “I certainly think a lot of guys paid for making such a big effort yesterday and Nibali was one of those.”

In his final race before retirement, Contador remains fifth overall but edged four seconds closer to a place on the podium, 1min 17sec behind Wilco Kellerman. Fabio Aru, the 2015 Vuelta champion, gained 12 seconds on the Froome group to move up to eighth overall. Another undulating route awaits in Friday’s 149.7km 19th stage from Caso to Gijon before Saturday’s decisive mountainous queen stage that finishes with a climb up the Alto de l’Angliru. 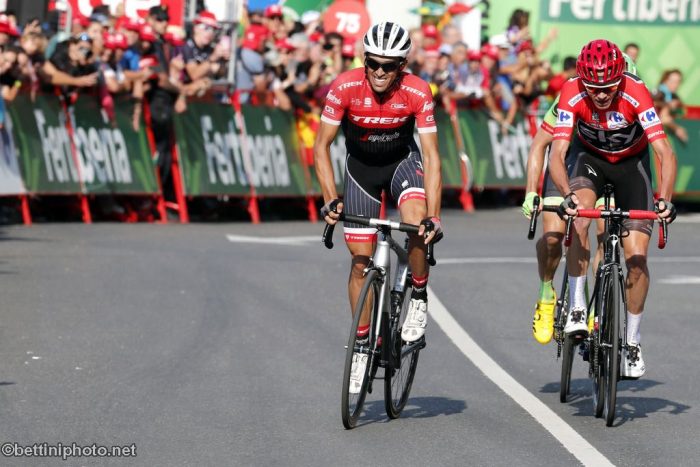