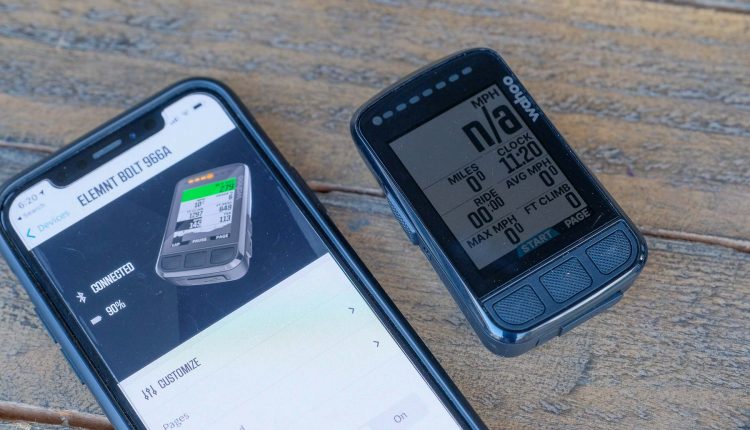 As we said the new Bolt V2 is in reality a mini Wahoo Roam. Just like the Roam, the new Bolt has a 64 color display just smaller at 2.2”, an upgrade from the monochrome 2.2-inch display that is on the original Bolt. This display, like the rest of the Elemnt line, is not a touchscreen. There is now a light sensor that when set to auto will automatically illuminate the backlight. The screen is not as matte as the Roam but less reflective than the original Bolt.

There are now base maps just like the Roam so navigation is much improved when comparing to the original Bolt or Elemnt. The buttons are still layed out the same but have a new look and feel. The pressure needed to actuate any of them is much less and in our opinion an improvement. The buttons along the bottom are now convex is shape and the raised profile also makes them easier to use. Just like the original Bolt there is an led strip along the top but unlike the Roam there is not one along the left side.

Probably the biggest change is that the connection port used for charging and manual data transfer is now a USB-C type. This is the first Wahoo computer to get this upgrade and the rest use a USB Micro-B type. The new type C port is handy because it is not directional. Since the size has increased slightly the new Bolt out front mount has also been slightly enlarged. The new Bolt will fit on the old mount but the old unit will not fit on the new mount. If you are like us and use an aftermarket mount most of the time like K-edge then compatibility is not an issue.

In the box is two mounts, the new out-front and the same stem mount that is secured with supplied zip-ties. Since there is now a USB-C port there is a very short (1ft) USB-A to USB-C cord supplied. Not much else is needed or supplied other than the vey small screw used to secure the unit to the out-front mount, needed for certain types of races per their rules.

The new Bolt has ANT+, Bluetooth, wifi, barometric altimeter, ambient light sensor, GPS, GALILEO and GLONASS. It can pair with pretty much any form of sensor you would need on a bike from, speed, heart rate, cadence, power meter, tire pressure and more.

Like the rest of the Wahoo Elemnt ecosystem setup relies on the use of their Elemnt app. Sure you can skip this and run with the system defaults but this leaves you unable to customize the data menus or in reality anything else. From the computer itself, you can only add or remove sensors.

Using the Elemnt app is the way to go and the process is simple. You simply scan the QR code that is displayed on the screen of the Bolt and follow the instructions. It really is one of the most simple setup processes in the cycling computer market. Once the connection is made the menus and settings are very easy to understand. There are no deep-rooted settings that are hard to find or change. It is simple enough that we can usually change things while still riding our bike (not recommended).

For those that like to have big bold data fields, the Bolt (and all other Elemnt computers) are a great option. During setup you simply choose the fields you would like to see on each page. You prioritize each unit and when using the computer you can use the buttons on the right side to zoom into the number of fields you can see. This means with a few clicks you could see a very magnified and large single data field or with a few more presses in the other direction, see all nine data fields or any number in between.

To be honest the new Bolt is almost an exact replica of the Roam user experience. This is good since we use the Roam pretty much daily. The feel of the buttons is much improved over both the original Bolt and the Roam. The button layout is the same so there were no surprises. 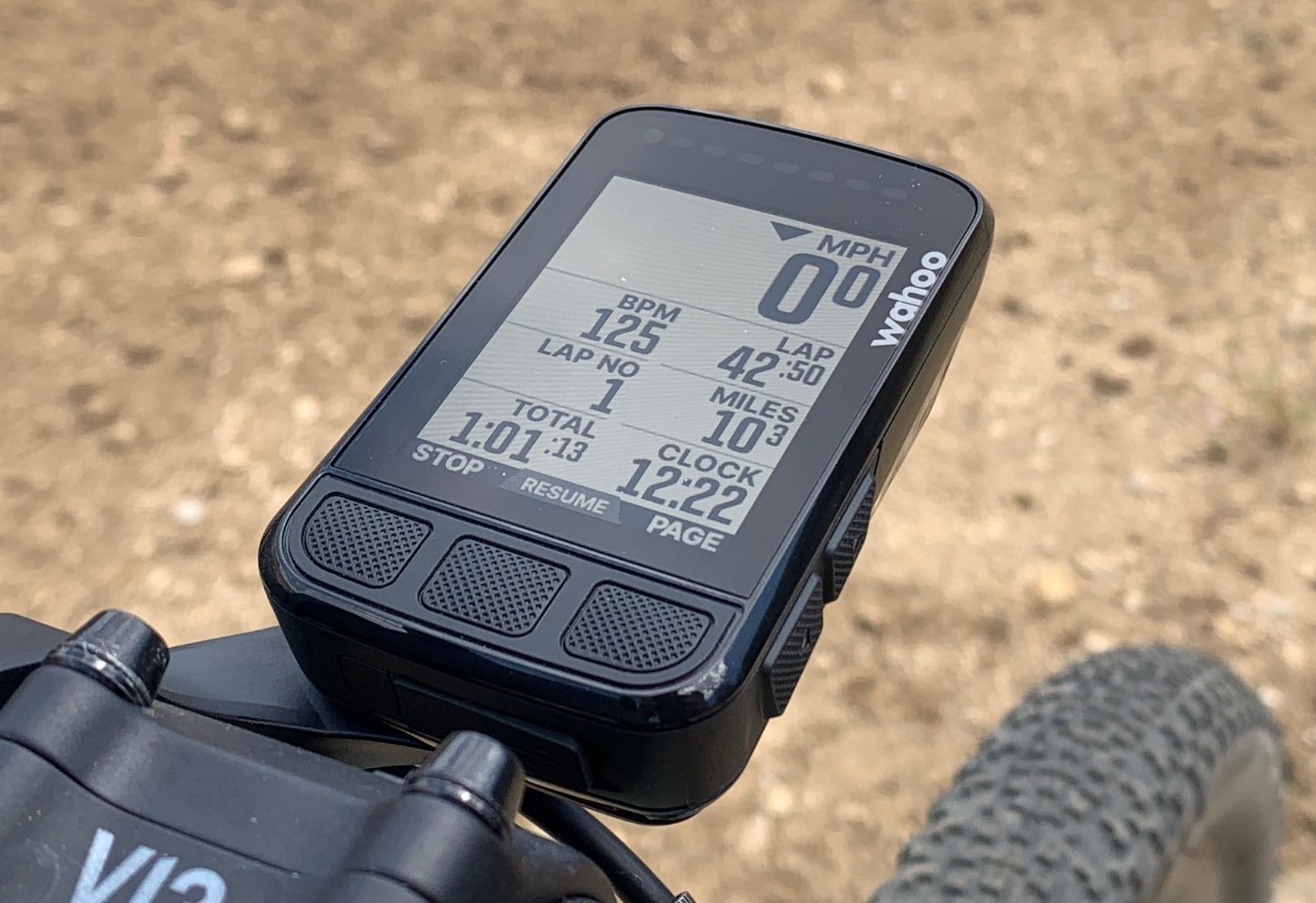 We have been using a beta version of the software and this is likely why our unit takes on average 48 seconds to boot and able to start a ride. This doesn’t seem like long but Elemnts already are considerably slower to load than the competition. Our old Bolt takes 32 seconds and the Roam 35 seconds. For comparison, the Garmin Edge 830 takes 13 seconds to boot. Not a big deal but something we noticed as we were anxiously waiting to get moving on the new unit.

The biggest ride experience change is the navigation and maps. Wahoo uses chevrons to indicate route direction and the subtle use of color only adds to the experience. Routes from most of the popular route building sources populate the menu automatically if you have your accounts linked. Like the previous Elemnts you need to be on the map page to get to the route selection menu. Overall loading, using and navigating with the new Bolt was simply easy.

Our only real hiccup is that we forgot to turn off auto rerouting. This has always bothered us on the Wahoo units because their system is fairly sensitive to being off route and it kicks on often if you are not on well-defined city streets, aka gravel. The real issue the reroute it gives you replaces your normal route and in most cases, we just keep on and it eventually corrects or we end the route and reload it. There is no way to turn this off on the unit itself and you must use the app to turn it off.

Overall the new Bolt makes it even harder to choose which Wahoo computer is best for you. The biggest factors are going to be the battery life, screen size and budget. The Bolt has a claimed battery life of up to 15 hours while the Roam is 17 hours. The 2.2” screen is a bit smaller than the Roams 2.7” but both use subtle hints of color throughout the experience. The new Bolt is $280 while the Roam remains $100 more at $380.

The interface is refined and simple but for most of the features, setup relies on the use of the Elemnt app. In 2021 this is pretty standard but for those less app savvy users, this might come as a surprise. The one tech bit that still gets us is the need for the app to be connected to the unit for it to transfer a ride over wifi. Once setup we rarely need the app unless you are the type that wants every call and message notification displayed on your cycling head unit, we aren’t. This means that when we finish a ride we have to launch the phone app to get our unit to upload our ride, whether we are near one of our saved wifi connections or not. Other brands of cycling computers will turn on wifi at the end of a ride and connect to a saved network if available, as well as auto uploading the finished workouts.

Why and who do we recommend a Wahoo computer to? Anyone that appreciates customer service and that “do what’s right” mentality. If you have problems or just need help, give them a call or email and they will do their best to help and make it right. This is not something we can say their biggest cycling computer competitor is known for. With that said for the best user experience be prepared to get friendly with their Elemnt app, it’s easy to use.

We haven’t had the new Bolt long and the entire time has been on beta software. We have had many updates, sometimes two a day. This is to correct small bugs and things the team and users like us find. We sent over a few of our bugs, and Wahoo assured us that they were already in the next update.

We had a small issue that our base maps were not aligning correctly and while riding on a few different roads it looked like the road ended or we were in the middle of nowhere. A few minutes later and further down the road, it was displaying correctly.

We also have small things like fluctuating battery level indication. This made it hard to test the battery level because we don’t have the time for one epic 15-hour ride. When we powered down the unit then back up we would have two different numbers. Also not a big deal and will likely be sorted by the time you read this. With 15 hours of life on a single charge, there are only a handful of events or days like that on the calendar and we’ll likely have a battery backup anyway.