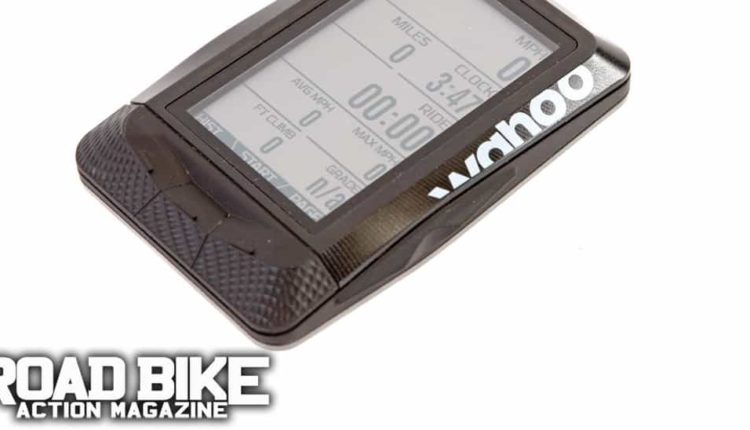 When simplicity is the best function

The Wahoo Elemnt is a real jack of all trades, where the best feature is the design’s simplicity itself. Right out of the box to set up your Wahoo, you simply pair it with your smartphone by using your camera with the QR code, which appears on the Elemnt. Once you’ve paired your Elemnt with the Wahoo app on your phone, you can set up all of your training pages on your phone, then sync it with your Elemnt via Bluetooth. We really liked this feature, because unlike some other bike computers where you have to continuously hit buttons to find the right selection of functions, the Wahoo is quick and easy.

Once you have your Elemnt set up, the functionality keeps on pace with its simplicity. While you have one of your pages on screen, you can zoom in from seeing 10 units of measure all the way to a single unit of measure with a very large scale on your screen. We really enjoyed the navigation part of the Elemnt as well. With its large screen, it displays a very simple turn-by-turn route. With it being set up wirelessly, you don’t need any plug-ins with a USB to have your favorite routes uploaded. If you have the Element KICKR trainer, you can take these same favorite routes of yours and ride them inside with resistance all set up through the Wahoo smart technology.

With the advent of Strava’s new live segment feature, you can get notifications of when segments are coming up and, while you’re competing in a segment, how much time is left to reach the KOM or beat your PR. In addition to ride info and ANT+, with the Bluetooth compatibility, you can receive text messages and e-mails on your screen. Incoming phone calls may be seen as well.

More than anything, we really fell in love with the simplicity of the device. The computer is a bit larger than your average cycling computer, but seeing text messages come through and being able to read them on the large screen made it worth it. If we had a training ride to do where we wanted to see all of our stats with power, distance, zones and elevation, it was nice to have all of that on a single page. In contrast to a screen filled with numbers, when going out for just an easy spin, all it takes is just a couple of clicks on the outside frame to enlarge the readout to just show distance and time.

With all its features, we were initially a bit nervous with how user-friendly it would be; however, it ended up being the most straightforward computer in use. When we first got out on the bike, we had forgotten to add in heart rate zone, and it took a simple stop to grab our phone and add that into the app to be shown, then synced to the Elemnt. So simple.

This is currently one of our favorite computers that we have used. As if its simplicity wasn’t enough to like, the Elemnt’s many other features just make it another great accessory to add to your favorite arsenal of cycling tools. The navigation feature works so smoothly, and we can’t wait to sync it up for the Dirty Kanza 200, where you must upload your route ahead of time if you stand any chance of finding your way back to the finish.

While testing out the Wahoo Elemnt computer, we were invited to join a new product launch in San Luis Obispo. We had no idea what the launch would be, but it couldn’t have came at a better time, as we were really enjoying and learning all about the Elemnt. On our second day we had our surprise morning meeting before our ride where the founder/CEO of Wahoo Fitness would unveil to us the new Elemnt Bolt computer.

Normally, when a new product comes to life, there are more features and functions offered, but Wahoo went a different route in rolling out the Bolt. Wahoo listened to their consumer feedback where they were asking for a smaller version, and during this process of bringing a new computer to life, they stumbled upon the problem that most cycling computers aren’t made to be aero, despite everything going aero in today’s cycling world.

Wahoo founder Chip Hawkins said, “It seems silly that professional riders spend hours in the wind tunnel trying to reduce every watt of drag possible on their equipment setup, yet no one focuses on the computer design and how it affects performance.”

To help evolve the Bolt, Wahoo brought on Dimitris Katsanis to help get there. Dimitris is the managing director of Metron Advanced Equipment and a leader in composite design and composite engineering across many industries. Prior to helping Wahoo, he has collaborated with the UCI, British Cycling, Boeing, McLaren and SAAB Aerospace. In fact, Katsanis helped design Bradley Wiggins’ 2015 World Hour Record bike and Chris Froome’s 2013 Tour de France-winning TT bike.

“It was Wahoo’s primary goal to create a computer that improved results on the bike, not hide them.” Katanis said in a 40-kilometer time trial, a rider averaging 21 mph could be up to 12.6 seconds faster with the Bolt.

To accomplish this, Wahoo created the smaller-sized Bolt. The new design creates a more seamless and streamlined surface when the head unit is connected to the mount to help reduce wind resistance. During their extensive testing in the wind tunnel, they found that tapering the sides maximizes the Bolt’s wind-slicing properties. Another common problem in current cycling computers is that once you slightly tilt the computer upwards for better viewing, you kill any aerodynamic advantage. The Bolt was designed with the scoop mounting bracket system to not change any air resistance if adjustment is needed in the upwards direction.

In the current cycling world where everything is heading towards aero, it’s a head-scratcher why nobody has brought this thought process to cycling computers yet. Well, now Wahoo Fitness has with the new Elemnt Bolt.

Register for the Belgian Waffle Ride