CFD-tested, aerodynamic design truly belongs on the front of the bike 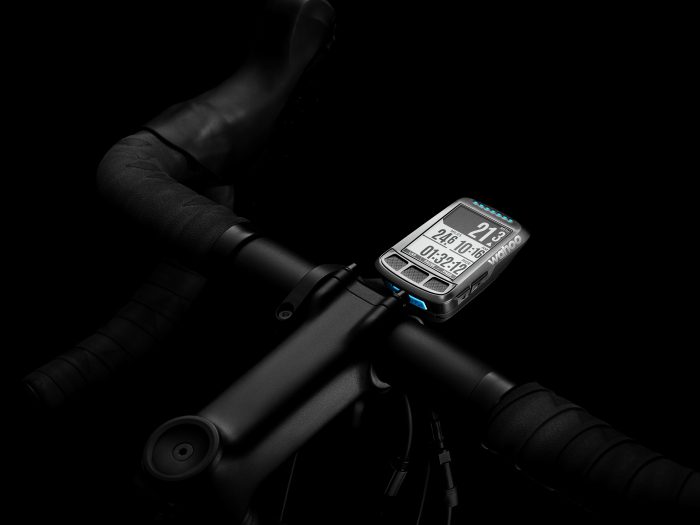 Addressing the unique needs of the performance-driven rider, ELEMNT BOLT pairs the ELEMNT’s groundbreaking ease of use and powerful performance with a form factor designed to blend as seamlessly with your bike as it does with your training and racing.

With the introduction of the ELEMNT, Wahoo reinvented how users interact with their bike computer. Leveraging a powerful companion app to simplify setup and customization, they threw out the rulebook governing the cycling computer user experience up until then. Pairing a unique software approach with innovative hardware solutions, Wahoo also introduced game-changing features such as ‘Perfect View’ zoom and its ‘Quicklook’ LED Indicators. 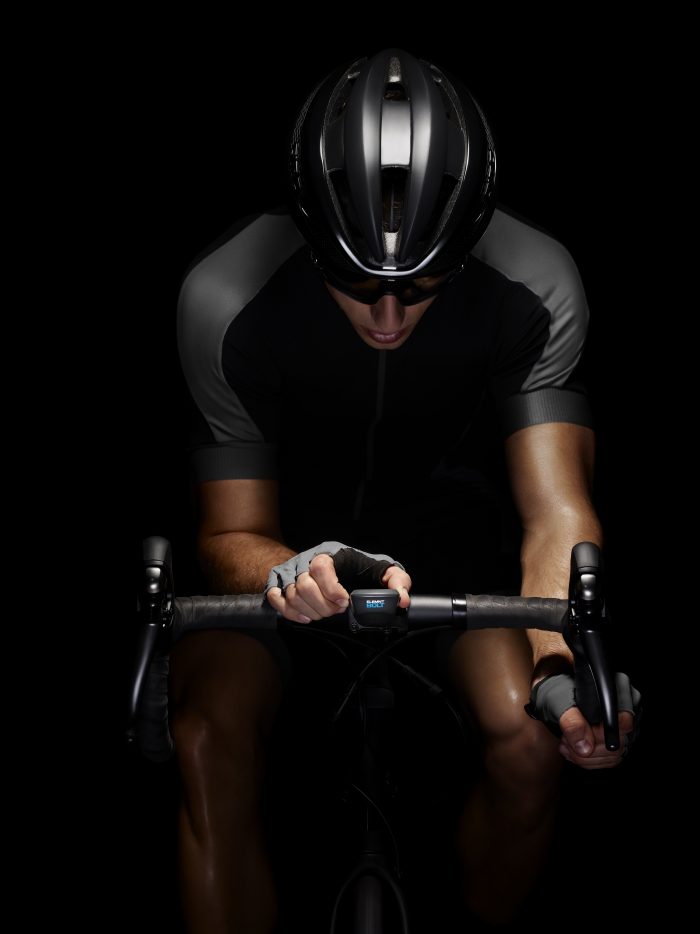 After reinventing the GPS computer just a year ago, Wahoo didn’t rest there. While the ELEMNT took an innovative look at how a cyclist interacts with their computer and data, with the ELEMNT BOLT, Wahoo has redirected its focus onto how the computer interacts with its environment. Collaborating with world-renowned cycling aerodynamics expert Dimitris Katsanis, the same designer behind British Cycling’s revolutionary track bike that debuted at the 2002 Olympics and components of Bradley Wiggins’ 2015 Hour Record, Wahoo Fitness set out to design a bike computer that helped improve your performance, not just record it, while retaining the acclaimed user experience introduced with the ELEMNT.

Introducing ELEMNT BOLT: the first GPS cycling computer and mount developed as an integrated system in order to drastically reduce drag. When tested against leading competitors and their stock mounts, the ELEMNT BOLT system was shown to reduce air resistance by over 50% in real-world conditions. Putting that advantage into numbers, over the course of a 40-kilometer time trial, a rider traveling at 21 miles-per-hour will save 12.6 seconds over a rider using a leading GPS bike computer competitor.

“In recent years the sport of cycling has put a premium on the study of aerodynamics and gaining a mechanical advantage wherever possible. Knowing this, it was Wahoo’s primary goal to create a computer that improved results on the bike, not hinder them. The only way to do this was to think about the end result and work backward from there. This led us to design the computer and the mount as one; an integrated aerodynamic package. All gains needed to be achieved while also improving the user experience, the core Wahoo promise to its customers. This forced an iterative design and testing process which resulted in the innovative ELEMNT BOLT system,” said Katsanis.

“It seemed silly that professional riders spend hours in the wind tunnel trying to reduce every watt of drag possible on their equipment setup, but until now, no one has focused on the computer design and how it affected performance. Instead, everyone seemed to be perfectly happy settling with the status quo,” said Chip Hawkins, Wahoo Fitness CEO. “We designed the ELEMNT BOLT to provide riders with all of the data they need to perform at their best, while also improving their results.” 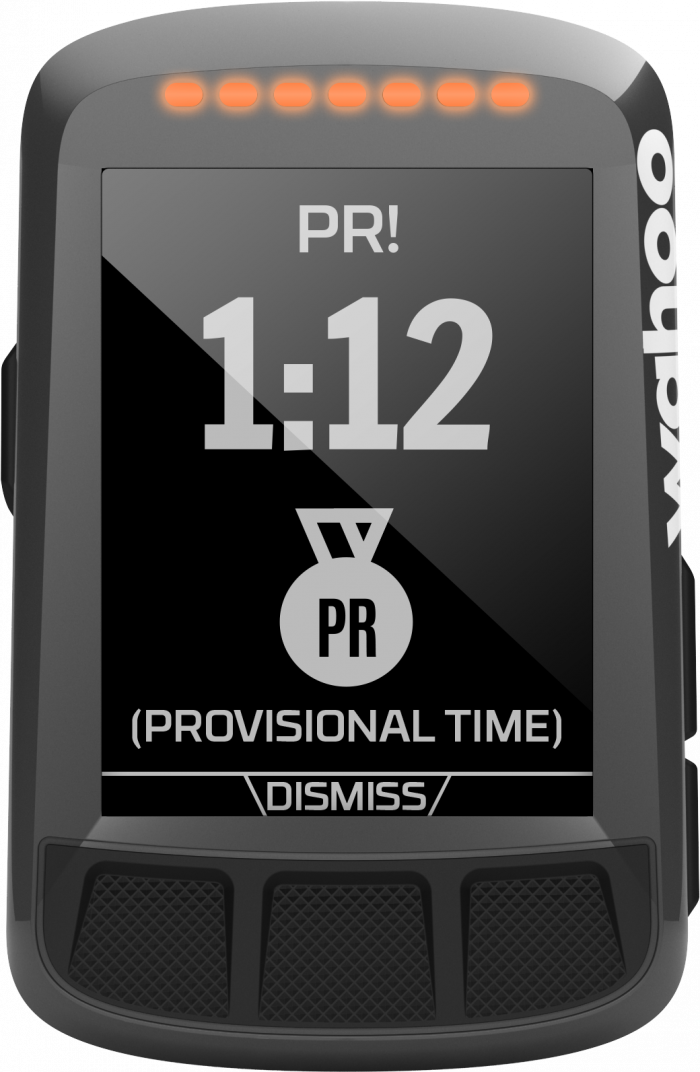 ELEMNT BOLT utilizes a high-contrast 2.2-inch display as well as the QuickLook LEDs introduced on the ELEMNT to allow riders easy, at-a-glance access to pertinent ride data as well as call, text and email

notifications. ELEMNT BOLT is equipped with WiFi for over the air updates and both ANT+ and Bluetooth allowing it to connect to sensors of all kinds, as well as most popular electronic shifting systems.

As with the Wahoo ELEMNT, all data fields and page configurations can be customized via the ELEMNT companion app available for both iOS and Android. The app also automates the pairing process for fast, frustration-free setup and personalization.

Pre-loaded with maps from around the world, the ELEMNT BOLT also seamlessly integrates with popular cycling platforms like Strava Live Segments, Best Bike Split Race Plans, and Ride With GPS.

ELEMNT BOLT retails for $249.99 and is currently available for purchase from wahoofitness.com as well as other leading bike dealers.

Dimitris Katsanis is the managing director of Metron Advanced Equipment and is a leader in composite design and composite engineering across industries, most notably cycling and aerospace. Katsanis claims he is not an aerodynamicist, however he works with the best in the field and has contributed to the overall success of aerodynamics in cycling over the last few years and is named in 4 patents or patents pending in the space. His list of contributions and collaborations are impressive and far reaching from Union Cycliste Internationale (UCI) and the British Cycling Team to Boeing, McLaren and SAAB Aerospace.

Katsanis’ first bicycle frame design was made from two crashed steel frames in 1989. By 1992 he designed and manufactured the bikes that the Greek national cycling team raced in the 1992 Olympics which were a combination of steel tubes and carbon fiber in the junctions. It was at this time he decided that carbon was the future so he went to Plymouth University to study composite engineering.

His first project in 1993-1994 was to make a full carbon bike. By 1995 the Greek national cycling team was riding Metron bikes and in the 1996 Olympics in Atlanta there were riders from 8 countries on Metron bikes.

Beginning in 2002 British Cycling began using Metron designs and continues to use Metron’s designs through today. This includes frames, forks, handlebars, wheels, cranks and saddles. Metron also played a role in the development of skinsuits and helmets for British Cycling. Katsanis and his team were part of a group known as the “Secret Squirrel Club” which had the goal of finding every marginal gain they could to give British Cyclists the best chance on the track.

Metron as well the winning Pinarello Team Sky Road and Time Trial bikes for both the 2015 and 2016 Tour de France.

In 2015, Bradley Wiggins broke the World Hour record on a bike designed entirely (everything except the chain, tires and saddle) by Metron. The handlebar on that bike was the first 3D Printed Titanium part to be used on an actual World class cycling event.

In 2015, Pinarello made a special version of the Dogma F8 (Designed by Metron) for Bradley Wiggins for the individual time trial at the Tour of Qatar. On the top tube they listed all the distinctions Wiggins achieved in his cycling career; every single one of which Wiggins was riding a bike with parts designed by Metron.

Located in Atlanta, GA., Wahoo Fitness has created a full ecosystem of apps, sensors and devices for the runner, cyclist and general fitness enthusiast. In addition to its growing range of GPS cycling computers, Wahoo Fitness’s award-winning line of Bluetooth Smart products include the KICKR and KICKR SNAP, the world’s first smartphone powered indoor bike trainers as well as the TICKR family of chest-based wearables. The TICKR family, composed of the TICKR, TICKR Run and TICKR X, combine heart rate training with advanced motion analytics. Learn more about Wahoo’s full line of products at wahoofitness.com .

A DIFFERENT TAKE ON THE SEAT PACK