Belgian cyclist Remco Evenepoel has not  raced since a serious fall during last year’s Tour of Lombardy, but will start the  Giro d’Italia, Deceuninck-Quick Step confirmed on Monday. The 21-year-old, who has been dubbed the heir to the legendary Eddy Merckx, fractured his pelvis after hitting a bridge wall and plunging 30 feet into a ravine during the Italian race last August. The youngster came off crutches in September but his return to racing has taken longer than initially expected.

“This is my first race since last August, we will have to see how my body reacts”, said Evenepoel on his team’s website ahead of the Giro which starts in Turin on Saturday.

“We will take the race day after day. The most important thing is that I am back with my teammates and my staff, which makes me very happy.”

It will be Evenepoel’s first Grand Tour.

European junior champion in 2018, Evenepoel won the 2019 time trial before  winning all four stage races that he took part in last season, including the Tour of Poland.

He was due to take part in last year’s coronavirus-delayed Giro in October before his Lombardy crash landed him in hospital.

The Belgian outfit will also line up the Portuguese Joao Almeida, who wore the leader’s pink jersey for two weeks last year before finishing fourth and Frenchman Remi Cavagna, winner of the Tour de Romandie’s time trial on Sunday. 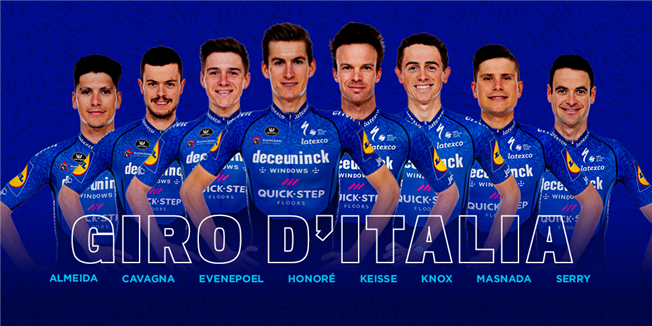