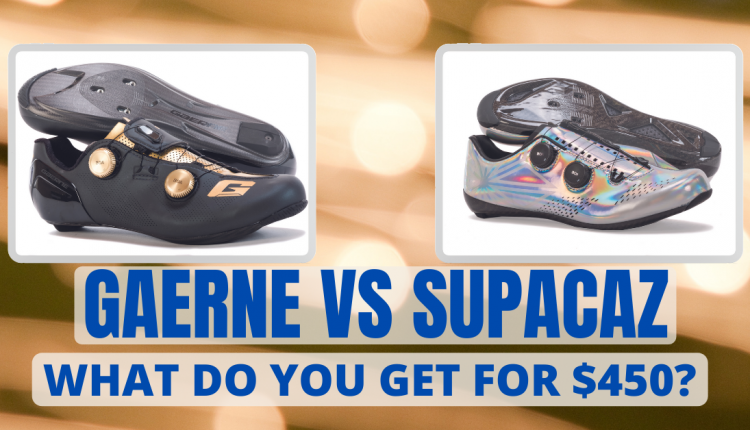 As one of three touchpoints between the body and the bike, every cyclist knows that shoes play a critical role in both the duration and enjoyment of the riding experience. To that reality, it is a well-known fact that essential to one’s cycling kit is their shoe selection. Whether looking to experiment with your first pair of cycling shoes or trying to upgrade to a more performance-oriented option, understanding your foot shape to achieve a proper fit is key.

Finding a pair of shoes that not only fits and performs well but looks good and is durable has just become slightly easier, thanks to two shoes we’ve just received. Longtime Italian footwear maker Gaerne and new kid on the block Supacaz have released two premium pumps with the looks to match their performance and top-end price tags.

Gaerne has been manufacturing high-performance (cycling and motorcycling) footwear in Italy for 60 years. Much of the production is done by hand in-house by lifelong employees, which we got to experience firsthand during our factory tour in 2017. Worn for decades by some of the sport’s top athletes, like Fabian Cancellara, Cadel Evans and Fabio Aru, Gaerne has a proven track record inside the pro peloton.

Gaerne’s flagship, the Carbon G.STL, came to us in a limited-edition matte black colorway. For some, the gold accents were reminiscent of the sophisticated feel of an ornamented Ferragamo loafer to add to its Italian heritage. Small, laser-etched holes are found throughout a majority of the shoe’s upper, allowing for moderate airflow, though they do not fully pierce the microfiber. The tongue is bespeckled with the same etchings and is slightly padded to support the foot. An impressive detail was the small Velcro tab to keep the tongue in place and prevent unwanted movement. The microfiber upper wraps around the top of the tongue encourage a snug fit when secured.

The base of the shoe is where you’ll find the stiffest carbon sole offered in Gaerne’s catalog and features four small vents. Three are front-facing to allow air in, and one is an exhaust port located behind the cleat mounts. We’re fans of the replaceable heel grip, but wish the plastic guard at the tip of the sole offered a bit more protection.

Gaerne spec’d a pair of Boa Li2 dials in a unique lacing pattern with eight points of contact across the shoe. The top dial pulls the microfiber upper across the tongue in a boomerang-shaped pattern that has four fixing points. The lower dial sits just to the side of the toe box and uses an opposing U-shaped pattern with another four fixing points. The Li2 dials are a streamlined version of the Li1s and use the same mechanics, which twist clockwise to tighten, counterclockwise to relieve pressure and pop up to fully release. 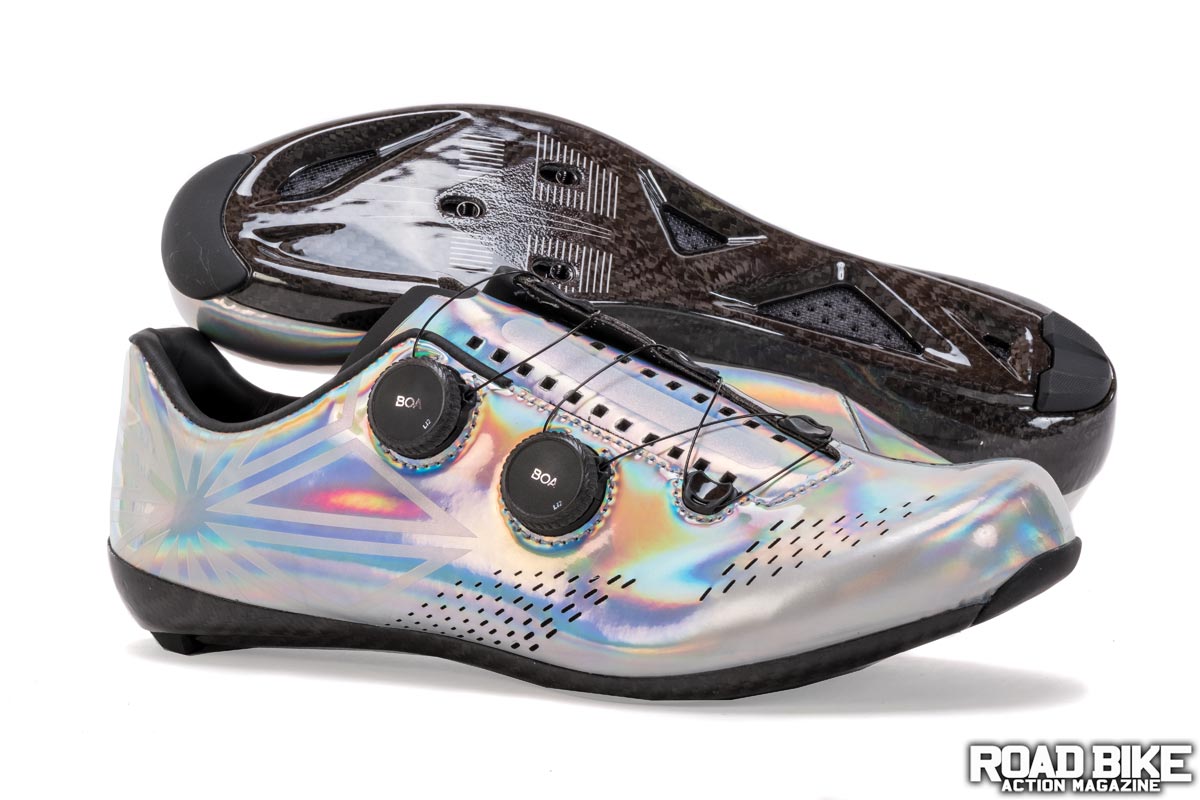 For anyone wondering how a brand best known for making handlebar tape and flashy small parts rose to such performance shoe prominence, it might have something to do with the fact that Supacaz founder is Anthony Sinyard, as in the son of Specialized founder Mike Sinyard. Seeking to increase the flair of the ever-dulling aesthetic trends of the last decade, the young Sinyard began to produce eye-catching bar tape, bottle cages, kits and, now, a line of shoes under the Supacaz name.

Taking a different approach from Specialized’s mainline S-Works 7 shoes, the Kazzes are based around an array of flashy microfiber uppers with plenty of wide laser-cut ventilation. Happily, we received the Hologram model, which appears silver with flashes of yellow and blue hues in direct sunlight. Supacaz offers three similarly flashy light-reactive colorways.

Around the heel, the microfiber is lightly padded and has a smooth interior. The tongue is thin with a reflective strip down the center and plenty of ventilation as well. Supacaz uses an extended sole design to increase stiffness and support of the foot, specifically around the heel. The rear of the carbon sole raises and cups the lower quarter of the heel.

A pair of Boa Li2 dials are placed near each other on the outside, near the top of the foot. The top dial is latched to the opposite side of the shoe, while the lower dial secures the lower half of the shoe in a figure-eight lace pattern.

Having tested quite a few pairs of Gaerne shoes over the years, our test riders were interested to see how the use of the dual Boas and the lacing design would affect the fit of the traditionally narrow shoes. We noted that the top of our foot and heel were well-secured by the wrap-around upper, but a few of our testers reported a lack of support right above the “G” on the toe box. 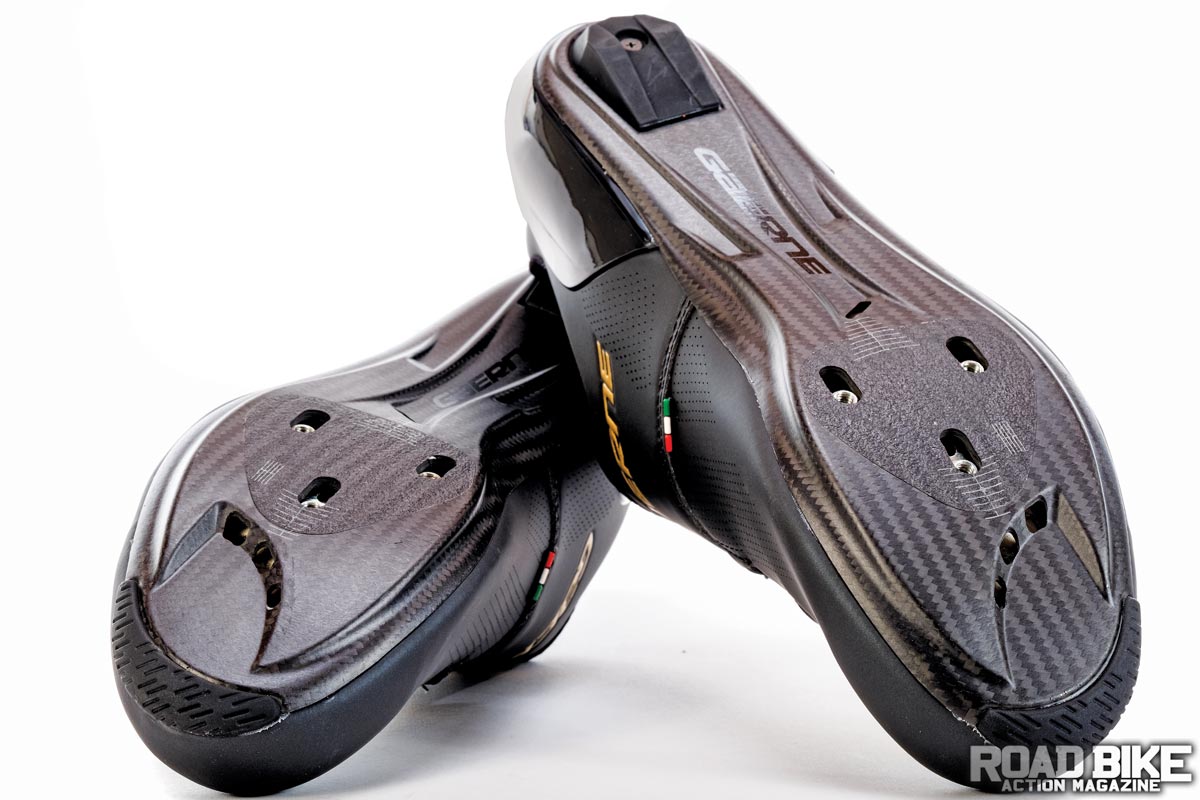 On the road, small adjustments of the Boa dials come quickly. We found ourselves easily tightening up for hard efforts and even loosening the dials when light spinning was the task. The wrap-around design provided an even fit without hot spots on rides lasting upwards of four-plus hours.

Weight-wise, the Gaernes are a bit heavy when compared to similarly priced shoes. Our pair of size 44s topped the scales at 592 grams. That’s 24 grams heavier than the Kazzes and about 70 grams heavier than their Italian competition offered at Sidi. However, the shoes are well-balanced, and the weight was never negatively reported during testing. In fact, the Gaernes were lauded for their support, a characteristic we find many shoes lacking. Also, the shoes proved relatively durable when compared to the Kazzes and just about every other top-of-the-line shoe we’ve tested. The Gaernes were supremely easy to clean, and the finish held up for hundreds of miles. Only light scuffs were noted on the bottom of the sole.

There was lots of interest in how the Kazzes would fit and perform on the road. They look much more like the Shimano RC9s rather than a typical Specialized shoe. Our size 44s fit true to size and are relatively wide throughout. The pair of Kazzes weighed 576 grams, about the same as a pair of Specialized Ares, but still 50 grams heavier than a pair of more expensive Sidi Sixties.

Much like the Gaernes, small adjustments are easy thanks to the Boa technology. We did receive reports of hot spots forming around the lower Boa on longer rides, but only when thedials were at their tightest. 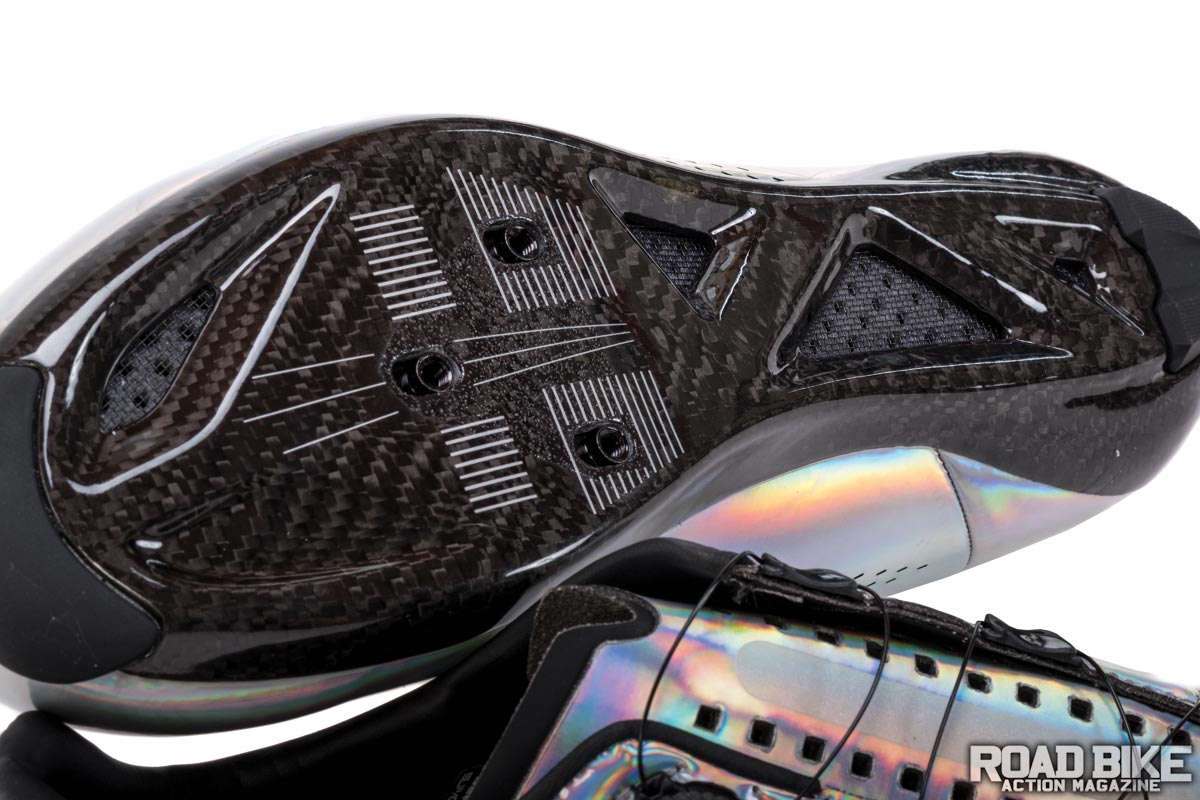 The Kazzes provided much more ventilation over the Gaernes and would be our choice of the two for warm-weather riding. Heat escapes not only from the wide vents in the upper but from a selection of large cutouts in the sole.

Unfortunately, on our first ride, we scuffed up the toe box due to a slight tire overlap with the shoes. It resulted in missing paint around the toes, but we were sure to avoid riding bikes that had the issue following the incident. Like the Gaernes, we wish there was more sole protection on the toe. Just about every time we unclipped at a stoplight, we found ourselves putting the sole directly on the pavement rather than the protective rubber guard, which led to some unsightly scratches on the sole.

Both of the shoes we tested are designed to stand out in the seemingly endless sea of basic black and white cycling shoes. They provide a refreshing take, and it is a relief to know that someone else agrees that more color in the group ride is a good thing. However, it was extremely disheartening to finish up our first ride with the Kazzes to find scuffs on the shoes. While caused by user error, it still felt like a bit of a letdown that the damage could occur so easily from the otherwise impressive overall design.

While a bit heavy, the Gaerne’s performed well but lacked the ventilation we desire on extra warm days. Each shoe fits a bit differently, and neither will fit the same person perfectly. The Supacaz are wider and fit true to size, while the Gaerne is narrower and fits on the small side.

Neither of these shoes are focused on weight savings. Rather, they’re both well-rounded shoes built to last longer than one season. With more miles using them, we can attest that Gaernes are famously durable. Located at the top end of the cycling-shoe price spectrum, the durability of each shoe is worth noting, although the Kazzes require added care to maintain their fancy finish.

• Performance to match the looks