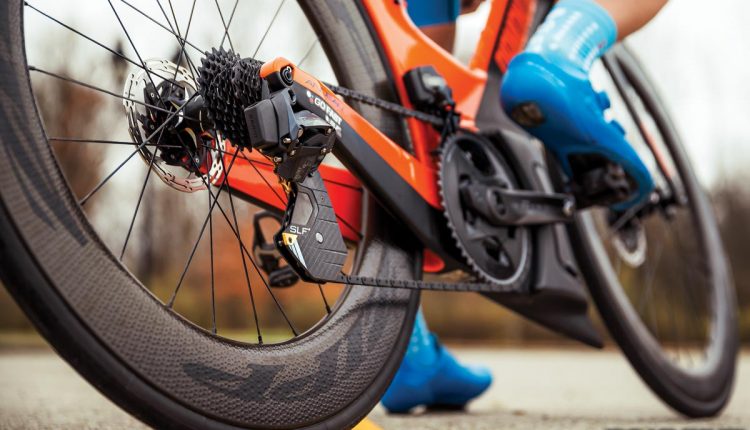 Blake Young is the kind of cycling personality/entrepreneur that, to me, makes up the heart and soul of the cycling industry. Just one man with plenty of vision and passion working alone in his garage producing some incredible looking bike parts, specifically artisan-level, oversized derailleur pulleys. His SLF (Smoother, Lighter, Faster) Motion brand pulleys epitomize the notion of eye candy on a bike, and as biased as I am, I would happily add, “What else would you expect from a former pro motocross racer?!”

It was after I saw another exotic bike built by Two Hubs Cycling Boutique that I first learned about the SLF Motion pulleys, and the mere sight of the carbon cage and anodized pulley wheel combo drove me to know more about them. For the 37-year-old Young, life in the bike biz began as a hobby back in 2017, but it has since become a full-time pursuit. Currently, he makes cage/pulley combos for Shimano, Campagnolo and SRAM derailleurs in both standard and aero versions with a host of color options.

INSIDE WITH SLF MOTION

I started racing BMX when I was 3 years old and traveled all over the country going to races with my dad in a four-door Honda Accord until I was 13. After BMX is when I got into motocross. I suppose I chose a drivetrain component (pulley wheels) initially simply due to the fact of it being an actual performance part. I knew I wanted to go straight into that side of the game, because with my racing background, I’ve always loved the performance aspect of everything. Designing a cool-looking water bottle or a cool-looking seatpost wasn’t really on my radar. I wanted something that actually could help you go faster.

What’s the story behind SLF?

After I quit racing motocross, I worked for Caterpillar for five years as a 3D product designer and got into riding bicycles. At first, I was just tinkering with new parts and then started making standard 11t pulleys with ceramic bearings as a nighttime hobby. It was after I got them tested by an independent lab in Colorado and they proved to have 48 percent less friction than a version made by a competing brand, I decided to get serious as a business. From there I just began to lean on my years of product design to come up with something trick and even better.

Although I’m still just a one-man operation working in the garage of my house, for my new Evo line of cages I had some help from an outside designer.

Can you break down the production process?

It all starts with 24×24-inch slabs of carbon that I get shipped to me from California, and then I machine each cage individually. At first I was just using production bearings, but now to best control things like the radial play and clearance ratings, I build the bearings to my own specs. The wheels (14t top/18t lower) are made from 7075 aluminum and are anodized locally. I have both standard and narrow-wide pulleys.

At $600 each, the cages aren’t cheap, so what are the selling points for an oversized pulley?

I would be the first person to say that probably 75 percent of the cyclists who buy them are doing so for the aesthetics alone. And even if someone buys them just for the looks, I say, great, because when it comes to the aesthetic battle (over other brands), I still win! Still, even if only 1 percent of them find any speed advantage, to me that’s still great. As expensive as they are, mine are still close to $200 cheaper than some others on the market.

“I would be the first person to say that probably 75 percent of the cyclists who buy them are doing so for the aesthetics alone.”

As for performance, the bigger-diameter pulley wheel sheds the friction, and when you add a low-friction bearing, the chain articulation becomes smoother. Again, all that said, I won’t be the guy to say I guarantee that you’ll feel the difference by using them.

I know some people might say they don’t make sense, but after three years at it, in 2020 I had my best year ever, and then in 2021 I sold three times as much, so clearly there’s a market out there.

What do some people feel are the cons of using an oversized pulley?

The most consistent critique I hear is that they will hurt shifting performance, but I can make a stock system shift badly; it all comes down to the setup. Setup with the B- and C-tension screws is key. Some people say the cages aren’t durable, but they might be referring to a competitor’s cage that uses a plastic composite cage that has less structural integrity than mine that are full carbon. I also use titanium hardware.

Despite what some people think, I have a top triathlete (Lionel Sanders) and gravel racer (Lauren De Crescenzo) using them in 2022 and I doubt they would do so if it hurt their performance.

What’s in store with the future of SLF?

I have big ideas and intentions for the future of SLF Motion. Drivetrain performance upgrade components are only the beginning. Why not a complete drivetrain groupset? Why not a new take on a stem or handlebars? Why not a radical new hub/spoke design? There’s plenty of ideas up in this noggin of mine; it’s just making them happen. A huge part in the next step for SLF Motion is when I bring on my first employee in about two weeks. The days of a one-man operation are over!