(TARGETS LOW BACK AND GLUTEAL MUSCLES)
Start in the neutral position by lying face down on soft surface such as a folded yoga mat. Slowly begin to raise the head, arms and shoulders off the floor as if flying. Now raise the feet, knees and thighs off the floor so the back is arched. Hold this position for a count of eight (counting ?one-one thousand, two-one thousand, etc.’). Then go back to the neutral position for a count of two. Repeat for a total of 20 repetitions. Note this is an isometric exercise (muscles are contracted and held in the same position). The hold position can be extended as the muscles get stronger. This exercise has helped many of my clients become free from low back pain. 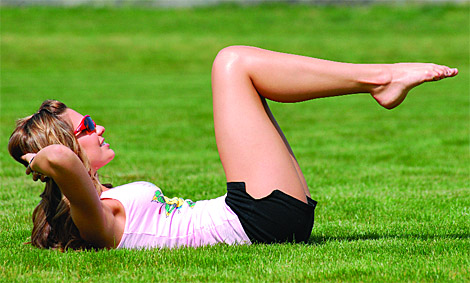 (TARGETS UPPER AND LOWER AB MUSCLES)
Begin in the neutral position by lying on the back. With hands behind the head, slowly raise the head, shoulders and torso off the floor while at the same time raising the legs, which are bent. The shoulders are brought towards the knees and vice versa. It’s important to not pull on the head with the hands. The progression from this is a Weighted Reverse Crunch. Start by holding a five- to ten-pound weight plate on the upper chest area. Then add holding a medium-size medicine ball between the knees. Begin by bringing the knees toward the chest and the chest toward knees, squeezing the abdominal muscles tightly at the top of the movement. Slowly return back to the neutral position. Do three sets of 15 to 20 repetitions.

THE TRANSVERSE SIDE PLANK 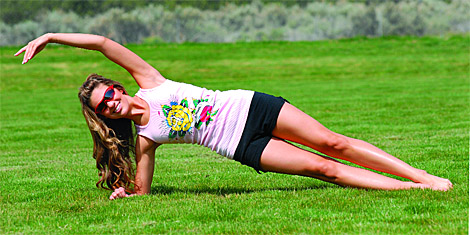 (TARGETS THE TRANSVERSE ABDOMINUS AND OBLIQUE MUSCLES)
Start out lying on one side of the body with the forearm pressing flat on the floor and under the shoulder to prop up the body. Next stack the feet together, one on top of the other. Raise the other arm and stretch it over the head. Begin to raise the hips off the floor until the body is straight from the feet to the head (like a plank). Hold for 20 to 60 seconds. It’s important to pull the abdominal muscles tight, with navel toward the spine. Keep the muscles contracted throughout the hold position. This is also an isometric exercise. As strength increases, the amount of time the position is held can be extended.

What are Some At-home Supplies That Could be Used to Clean or Wash a Bike?