Five-time Olympic cycling champion Bradley Wiggins is set to return to competitive action in London on Saturday — but this time on a rowing machine.

The 37-year-old former Tour de France winner is due to take part in the elite men’s two-kilometres event at the British Rowing Indoor Championships at the Lee Valley velodrome — the scene of some of his memorable achievements. Wiggins in June 2015 set the hour record at the 2012 Olympic velodrome and in March 2016 won the world Madison title there with Mark Cavendish. He did not compete at the venue at the London 2012 Olympics, instead riding in, and winning, the road time-trial.

The 2012 Tour de France winner’s most recent prior competitive appearance on British soil came in the London Six Day event at the velodrome in October 2016. He retired from cycling two months later. Wiggins turned to rowing for fitness and in June raised the prospect of competing at a sixth Olympics in Tokyo 2020, but this time in a boat.

Former British Olympic rowing champion James Cracknell said Wiggins, who will be 40 by Tokyo 2020, was worth a gamble. “First and foremost, Brad isn’t going to be rowing on the water at the British indoor championships —  he’ll be taking on a machine, and it’s an opportunity for him to put a score on the board which could mark him down as a contender,” Cracknell told the Daily Mirror newspaper.

Wiggins tweeted a picture of himself training this week. “Eye on the goal! Last big session before #BRIC on Saturday, 1250mts today on race pace. Been an amazing 9 month journey learning this amazing sport under the guidance of Eddie Fletcher & @jamescracknell, going to be a real honor racing with the big boys of rowing, happy days x.”

The 2km effort on an indoor, static rowing machine, should take under six minutes. Wiggins’ return to competitive sport comes after UK Anti-Doping last month ended a 14-month investigation into the contents of a jiffy bag delivered during a 2011 race in France. Team Sky and Wiggins deny wrongdoing. Wiggins said he and his family had been subjected to “living hell” during the period.

But the episode – plus seeking and receiving permission to use a powerful corticosteroid before three major races, including his Tour triumph — means the charismatic Wiggins will not be speaking to the media at the weekend. 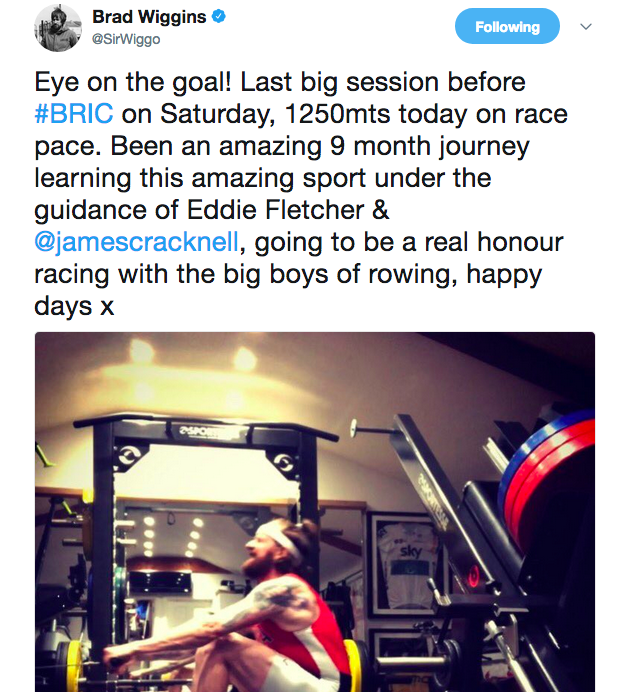