But for a crash a week ago, Dan Martin could be wearing the Tour de France yellow jersey instead of Chris Froome, but the Irishman is unfazed by what might have been. The 30-year-old was hugely unlucky to have been taken down by Richie Porte as the Australian crashed on a speedy descent. Martin got up, dusted himself down and got to the finish of that ninth stage, but 1min 15sec behind Froome and other overall contenders.

As the Quick Step rider now sits 1:12 behind Froome, many have pointed out that he could have been in yellow but for that crash, and the back problem he has suffered from ever since. But not Martin. “The GC (overall) time, I’ve ignored it, it’s happened. The thing that grates me a little bit is missing out on the opportunity to win the stage, because at that point I was very confident I was the fastest sprinter there,” he said.

Nonetheless, since losing that chunk, Martin has been steadily snatching back time on Froome and the other contenders, a few seconds at a time. On Thursday he took nine seconds off Froome and another nine on Friday. He was one of only two riders not to lose time to the champion on Saturday and then snatched 14 more seconds on Sunday. Having dropped from 25sec off the yellow jersey to 1:44 back after his crash, Martin has recovered 32sec of his deficit in just four days. And he says it’s down to greater tactical acumen than he had in the past.

“I learnt a lot from last year and how I rode,” he said of his ninth paced finish in 2016. “I rode aggressively but maybe a bit recklessly. I’ve just tried to be a little bit more calculating. “It comes from the confidence I’ve had from the results I’ve had this year, and a calmness. “I’m very relaxed on the bike and that lets you see things happening. I’ve got a very analytical brain, I look at the race situation and think about what’s coming up.” He’s also able to disassociate himself from the bigger picture and avoid the stress of worrying about what might be.

“A lot of riders get caught up in the enormity of the event and the so-called pressure. It’s still only a bike race and that’s why I’m racing it like any other race. “I never set objectives, I never say my ambitions. “My life’s not going to change if I win the Tour de France. I don’t need to win the Tour de France — it would be nice. “But at the end of the day, I’m just going to do my best and if my best is better than the other guys — I’ll win. “If it’s not, they were better than me, that’s it.” 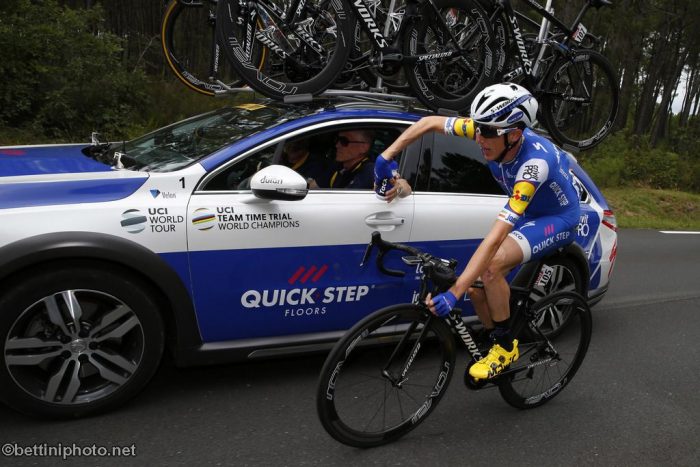