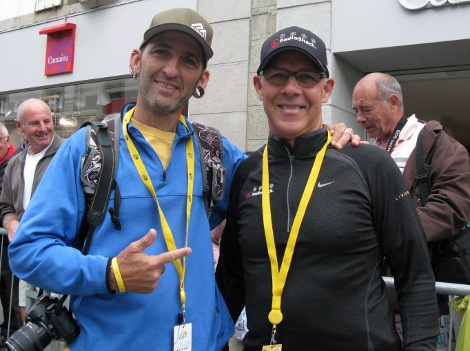 There I was, slicing up bananas and bagels at the neutral feed zone atop the Belgian Waffle Ride’s notorious Double Peak climb that acts as the final salvo of brutality for riders trying to finish the 130-mile Waffle ride, when some random guy walked up to me and popped the question: “Hey, you’re Zap, aren’t you?” When I answered in the affirmative, he followed up with an additional query and demand: “I read your stuff in the magazine, but why don’t you have a podcast? You should have a podcast.”

Since I was earnestly trying to concentrate on making sure one of my fingertips didn’t end up among the evenly sliced foodstuffs that I was preparing for the soon-to-arrive 2000 riders, I barely bothered to look up to offer a reply. “Oh, for a few reasons,” I said, “but it mostly comes down to not being able to find the time to do it.” Lame as that may sound, it’s true.

Despite my trying to stay focused on the knife, he next asked if I had a Twitter account, and again, I had to use the same excuse about not having the time in admitting that I was not a “tweeter.”

As we all know, social media has provided the world with no shortage of new forms of communication. From websites, Facebook, Instagram, Twitter, TikTok and Strava to name just a few, there is no shortage of platforms to talk about bikes. The problem, at least for anyone desirous of hearing and seeing my podcasts and tweets, is that neither exists.

THE LIMITS ON WORDS

Coincidentally, the Twitter query came in the same week that Elon Musk made public his desire to purchase Twitter for the lowly sum of $44 billion. And, it was after listening to a local TV news anchor break the Musk/Twitter news (alluding to a false fact that “everybody” is on Twitter) that I was reminded of my enmity to having a place in the Twitter nest. Everybody?! How could “everybody” be on Twitter if I wasn’t?! Neither was my friend Tommy or my daughter, which then makes three people who aren’t tweeting. And call me crazy, but I’m gonna go out on a limb here and presume there are probably others, too, who aren’t tweeting. In addition to having neither the time nor the interest to be on Twitter, it was this newsman’s supposition who “everyone” was supposed to be that irritated me enough to instill an even deeper intent not to be.

The number-one reason I avoid all these additional forms of talking about bikes is simply that the time needed to produce and consume it – for all of us – would be much better spent actually riding a bike.

In cycling terms, it’s as bad as when I hear people say “everyone” must use a heart rate monitor. Really?! I’ve been riding bikes for decades and I’ve never once strapped a monitor to my chest. I know there are people who know me well and who will read this and simply conclude that my avoiding Twitter and HRMs has more to do with the notion that I remain a Luddite of the highest order. They wouldn’t be entirely wrong, but neither would they be entirely right.

Admittedly, I am somewhat less than adept at mastering all things digital (my daughter will be rolling her eyes when she reads that!). While I do like (and appreciate) new technology and the uptick in communication that it’s allowed, my preference is to simply not obsess over it. There’s no doubt my phone has hundreds of tools to make life easier. I probably use seven. For me, relentlessly staring into a 3×5-inch screen is not how I like to while away the day. I prefer to look up and around to observe the world at large. And not to digress, but on a very personal level my distaste for today’s popular high-tech trappings includes a preference for extended earlobes versus having two little pieces of white plastic sticking out of the sides of my head.

A LIMIT ON TIME, BUT ALSO…

All that rationalizing aside, it’s not that I don’t believe in the value of podcasts and tweets, but, really, beyond our magazine, website and the occasional IG posts, the main reason I don’t partake in all the other platforms simply comes down to a matter of time management. To me, hearing the guy ask about podcasts is no different than the many people who’ve said I should write a book about all I’ve seen, done and heard in my 30-plus years as a cycling journo. As lofty as being an “author” might be, I get paid to provide my maximum efforts for anyone who reads Road Bike Action. Of course, there’s also the time allotted to writing for our sister ‘zine Mountain Bike Action and overseeing Electric Bike Action, but as long as it’s for a magazine, call me “old-fashioned,” but I’ll always enthusiastically find the time to do it.

But, honestly, the number-one reason I avoid all these additional forms of talking about bikes is simply that the time needed to produce and consume it – for all of us – would be much better spent actually riding a bike.