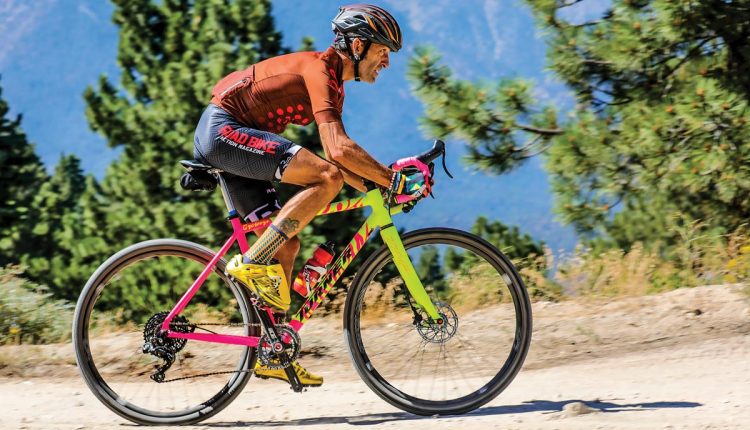 And to think, I’ve always prided myself on hiring good guys. Ha! You might remember the names Michael White and Neil Shirley, two solid guys who, as editors, continually strove to improve the editorial content of RBA while at the same time exploring new avenues of cycling. Basically, a couple of good guys.

Funny thing, I thought I was following a familiar path three years ago when I hired Troy to take Michael’s place in the lineup. Boy, was I wrong! Just this past week I got an e-mail from Dirty Kanza promoter Jim Cummins alerting me to an allegation that Troy and his friend David cheated at this year’s race.

Cheated?! Team RBA cheated?! My mind immediately recalled images of an incredulous Jimmy Stewart shouting, “This is a scandal!” as he grabbed his uncle Billy by the scruff of his neck in the movie It’s a Wonderful Life after his wayward-minded uncle had misplaced a bank deposit.

Yes, as it turned out, Troy and David did cheat. It seems that after abandoning the race early on for health reasons, Troy headed back out to shoot photos. Of course, that came after he’d already given another rider the front tire off his bike, which was legal since he had yet to abandon. When he came upon David staggering along stuck in a single (34×22) gear after his Di2 battery died some 70 miles earlier, Troy lent him an external battery and Di2 charger so he could shift the bike.

At the time Troy told David that making the transaction outside the official pit zone would be illegal and that if he could just ride another 20 miles, they could instead make the swap legally. By this time David’s body was incapable of any more low-gear spinning, but since he didn’t want to abandon the race, he accepted the parts just to finish.

“As much as we pride ourselves on being honest in what we report and how we report it, the rules are there for a reason, and we broke the rules.”

When Troy and David returned to the office and told me the story, I told them it had to be included in our coverage of the race (RBA, September 2018). In fact, the only way Jim found out about the ordeal was because we printed it.

Once I got Jim on the phone, I explained that as much an infraction of the rules as it was to provide outside assistance, since we printed the story, it was hardly like we were trying to get away with it unnoticed. Additionally, since it took David over 18 hours to finish (early on Sunday morning), it wasn’t like that fresh battery did much to improve his results. As one friend who was there later added, “I was already drunk and leaving the bar by the time David rolled in!”

For the record, I want to apologize to Jim and all the participants of the Dirty Kanza 200. The rules are there for a reason, and we clearly broke them. We’re already getting hate mail, which seems silly because most “cheaters” don’t publicize their misdeeds! I’m not trying to rationalize what occurred, but I remain proud of Troy for exhibiting some measure of humanity and David for maintaining a fighting spirit.

It looks like once again we have to bid adieu to another RBA regular. After close to a two-year stint in the journo trenches, our resident former pro rider Jon Hornbeck has decided to move on and take a marketing job with Monster Energy where he will be overseeing their push into the endurance sport market.

Although Jon was kind enough to break the news to me by avoiding the same, “Hey, Zap,” intro that was used by both Michael and Neil when they made their announcements, it was still a drag to learn of his departure.

Fresh from the racing world, Jon was a little rough around the edges when he arrived, however, “Cornbread” brought some authentic pro racing chops and perspective that proved to be an attribute to RBA. I was most proud of him when, as a gravel rookie, he pulled off a ninth-place finish at Dirty Kanza last year.

And just to show that I don’t hold grudges against cheaters, Troy’s partner in crime at Dirty Kanza, the young David Kennedy, has replaced Jon. For the last few months our editorial pump had been primed with his part-time talents, and as former shop mate of Troy’s at H&S Bicycles and a recently upgraded Cat. 2 racer, David is well-versed for the rigors of the job.

Just a 22-year-old lad, David has shown an aversion to the worst attributes of so many kids today by being on point with current bike tech and, like Troy, very detail-oriented. Now, if only I can convince him of the value of shedding his chamois hours before and after he rides!

If there has remained one goal of mine in hiring editors over the years, it’s that they arrive with a level of passion and dedication that will infuse these pages with valuable information that readers can rely on to enhance their own cycling experience. As easy as it is to just go out and hire a host of freelancers to get the job done, my preference has always been a DIY style of journalism whereby our first-hand experience and knowledge not only enhance the stories we write, but also provide readers with a reliable and authentic source of information.