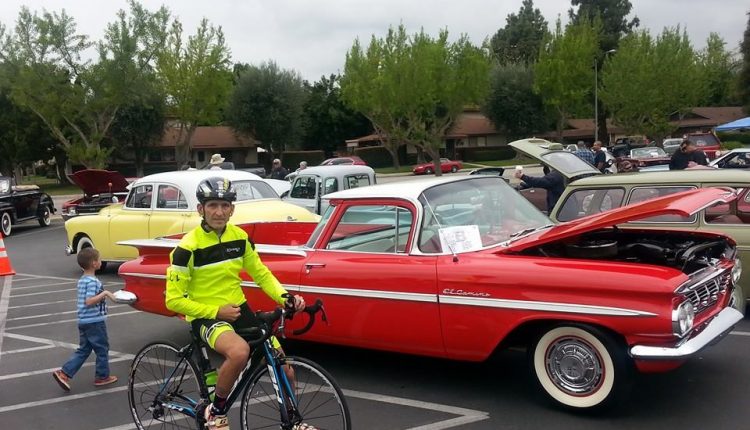 The stream of expletives coming from the cab of the Dodge Ram pickup truck were as loud as they were expected. And surely, were they warranted. After all, the guy had nearly just killed me when he pulled out of a driveway right into my path; why wouldn’t he be mad?!

Next came that chilling sound that all too many of you have also experienced—the gunning of the motor as it bears down on you from behind. At that moment my only option was to hug the row of side-view mirrors on my right, wince and hope the guy would only prove to be a little crazy.

And, as he drove up next to me, the torrent of verbal abuse continued: “You [email protected]#@% biker!” Although I usually make a point of correcting people when they misidentify us as “bikers” versus the more accurate term of “cyclists,” I figured that this was not the moment to offer a correction.

THE BACK AND FORTH

“Hey,” I shouted back as I continued to thread between his truck and parked cars, “You’re in a truck and I’m on a bike; you need to look both ways!”

Apparently, pointing out the obvious difference in vehicle size between us, as well as the obvious traffic-safety tip, only seemed to make him madder still:  “I did look both ways, but you came out of a blind spot—and you were speeding!”

Speeding?! I was pedaling at 16 mph, which was far short of the posted speed limit of 25 mph. Not only was I pedaling under the speed limit, but in my usual attempt to be as visible in traffic as possible, the neon-green kit I was wearing made me look like a day-glow pickle on two wheels.

I couldn’t help but ponder what the outcome might’ve been if I, too, had been driving another Dodge Ram pickup truck and not just some fancy Italian bicycle. The fact that I was able to turn so quickly and maneuver around his truck was only because I was on a bicycle and going below the speed limit.

If I had been in a truck, I was sure the result would’ve likely been far more severe than the love tap I gave his hood as I pedaled by (with arm raised to make the point—look out!). Okay, maybe it was more than just a tap, but I did use an open palm! But, honestly, I did feel somewhat emboldened given that the guy’s errant driving nearly cost me my life. But, I’m sure that in his mind, who was I to complain?!

As we continued in parallel formation with him still berating me from the safe confines of his truck, I was conflicted with a passive/aggressive need to put an end to the ordeal, but also not let him feel like he had the upper hand.

In summoning the lessons of passive engagement of such non-violent warriors as Gandhi and Martin Luther King while adding a pinch of punk-rock snarkiness, I looked at the guy one last time, blew him a kiss and said, “Good-bye,” before turning down a side street. All that was left was hearing the sound of his truck accelerating away just as moments before it had come bearing down on me.

“In my usual attempt to be as visible in traffic as possible, the neon-green kit I was wearing made me look like a day-glow pickle on two wheels.”

Sure, the road I was on was shaded by a thick canopy of trees so, yes, the visibility was less than ideal. For me, the bottom line was that he surely could’ve been a tad more diligent in looking for oncoming traffic especially since, as he admitted, I came out of a blind spot.

As cyclists, we remain the most vulnerable participants of daily street traffic. Although I can usually expect to have at least one close call on every ride, I rarely get angry. After all, as the famed philosopher Socrates once said, “It is what it is!” In short, I’m used to having close calls.

But, this was a really close call, and sometimes it’s hard to not take someone’s inept driving personally when the result (to the cyclist) could have such devastating effects. It turns out that I enjoy my life, my daughter, my friends and my job.

Just as the idea of taking the high road with errant car drivers has been preached to me, I do my best to do the same. However, sometimes it’s hard. Purposely angering car drivers is stupid and, admittedly, I felt kind of stupid afterwards. But, I also think that making them aware of our presence, even if it raises their ire, is important if only to remind them that we exist.

As always, the priority for all of us is simply to get home for dinner. And, to that end, while I encourage everyone to ride often and ride safe, don’t forget to ride for your right to ride!