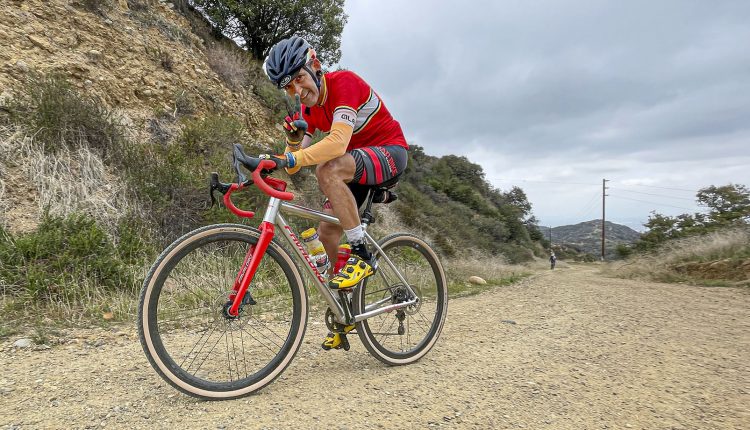 I had just finished a 40-mile road ride on a new gravel bike, and as I was closing in on the final few blocks to my house, some lady on a Celeste Blue Bianchi darted out in front of me from a side street. As I rode past, I offered the customary wave and “buongiorno” greeting that I give to everybody I meet on a ride. At that precise moment, all I was really thinking about was getting home and guzzling some quasi-Celeste Blue Gatorade.

Next thing you know, I hit a red light, and as I sat waiting for the green, the lady on the Bianchi rode up next to me. “Where are you headed?” I asked. She replied that she wasn’t exactly sure. Apparently, she was new to area and was only told to ride until she got to an Arco gas station. “Then what?” I asked. Again, she said she wasn’t really sure.

TOO NICE OUT TO STOP

Wait, did I mention that it was yet another one of those classically beautiful SoCal days that makes it difficult to stop riding? It was, so I figured I would attend to the newcomer and ride along with her for a while so she could learn the roads. The blue Gatorade was going to have to wait.

About eight miles later we passed through the town of Sierra Madre, and I pointed out both the town square where the weekly Montrose ride finds its finish, as well as the handful of four-way “cop stops” where the local constables lie in wait for any cyclist who fails to heed the big red stop sign.

When we finally reached the city limits, my immediate thought was to flip it and get back to my Gatorade. I did my best to describe a route that would loop around and get her back to the Rose Bowl from where she would know how to get home. Of course, my directions made no sense, and so finally I just shrugged and said I would do the loop with her. My planned 40-miler would now jump closer to 70.

As we rode westward along Huntington Dr., she noticed the 40mm tires that I was rolling on and asked what kind of bike it was. When I replied that it was a gravel bike, she quickly retorted, “Why would you ride with drop bars in the dirt?”

My counter came just as quick: “In fact, the better question is, ‘Why would you ride with flat bars in the dirt?!’”

It’s now been almost a decade since the word “gravel” first appeared in these pages (July 2012), and the segment of the bike market that so many said was just a fad is (thankfully) bigger and better than ever.

Am I feeling giddy? Yeah, you could probably say so. Gloating even? Yeah, that, too, especially when I think back to all the detractors who said “dual-purpose” bikes had no place in a road bike magazine and after all the mean-spirited letters we received insisting that we either start Gravel Bike Action as a separate publication or they would cancel their subscriptions to RBA because they took such offense to the concept.

“Our inclination to tout gravel as the ‘next big thing’ derived in no small part from a wide swath of sources—frame builders, component makers and especially seeing the number of entries that were selling out one gravel event after another.”

I also remember getting called out for riding a gravel bike on the weekly Montrose group ride (though not nearly as bad as when I showed up aboard an e-bike!) as if I didn’t belong just because I wasn’t rolling on pinner 25mm tires.

Why some people would get so bent about what size tires a bike had always escaped me. Usually, to no avail, I would do my best to remind the gravel detractors that no matter the type of tires, it was after all still just a bike.

FROM HERE ON OUT

I have to admit that despite our own embrace of gravel bikes, our early acceptance came from the knowledge we gleaned from speaking to so many industry insiders. No different than the wholesale use of disc brakes, our inclination to tout gravel as the “next big thing” derived in no small part from a wide swath of sources—frame builders, component makers and especially seeing the number of entries that were selling out one gravel event after another.

And now we have purpose-built gravel bikes with suspension and 1x drivetrains with 50t cassettes—oh, what’s a road geek to think?! The point is, everything in life has to evolve, and that’s just what the road bike has done. Bigger tires bring more comfort, control and safety. Lower gearing just makes climbing easier. Added water bottle mounts let you ride longer. To me, those are all important attributes of gravel bikes that will bring more people to cycling, whether they are ridden off-road or not.

RISE AND RIDE IN THE VINEYARDS — WINE COUNTRY GRAVEL CAMP