When dreams do come true - thanks to the bicycle 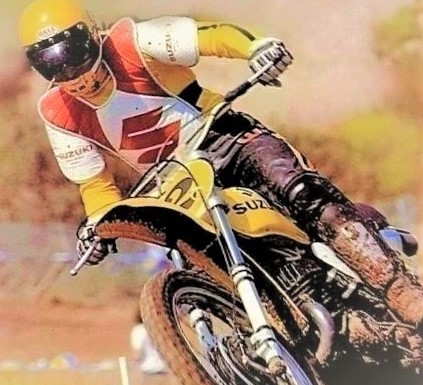 I remember it was just a few years ago when a friend of mine did his best to dissuade me of the notion that having heroes was a good thing. “Sheer folly,” I countered. Though I would agree that both the word and concept have been so exploited of late as to make true hero status seem less significant—“Hey, the stewardess gave me an extra bag of peanuts; what a hero!”—I remain an unabashed fan of elevating certain people in my life as something truly special and inspirational.

I recently received a letter from RBA reader Bud Carroll who wrote in extolling his memories of a certain Belgian motorcycle racer. That man’s name is Roger DeCoster, and by chance, he is not just one of the many Belgian motocross champions found in the history books, but he has also been one of my biggest heroes ever since my MX grom days in junior high school.

Back in 1986 when I started working for Mountain Bike Action (years before RBA became “a thing”), I also had the privilege of doing double-duty working for Motocross Action. And it was during the long days covering motocross and Supercross races that I had the chance to actually meet the Belgian legend.

Over the years I would always plan to bring some old racing photo of Roger for him to autograph—a collection which lines my walls at home today. After we started Road Bike Action, my conversations with Roger would now include talk of bicycles and his friendship with his Belgian compatriot Eddy Merckx. 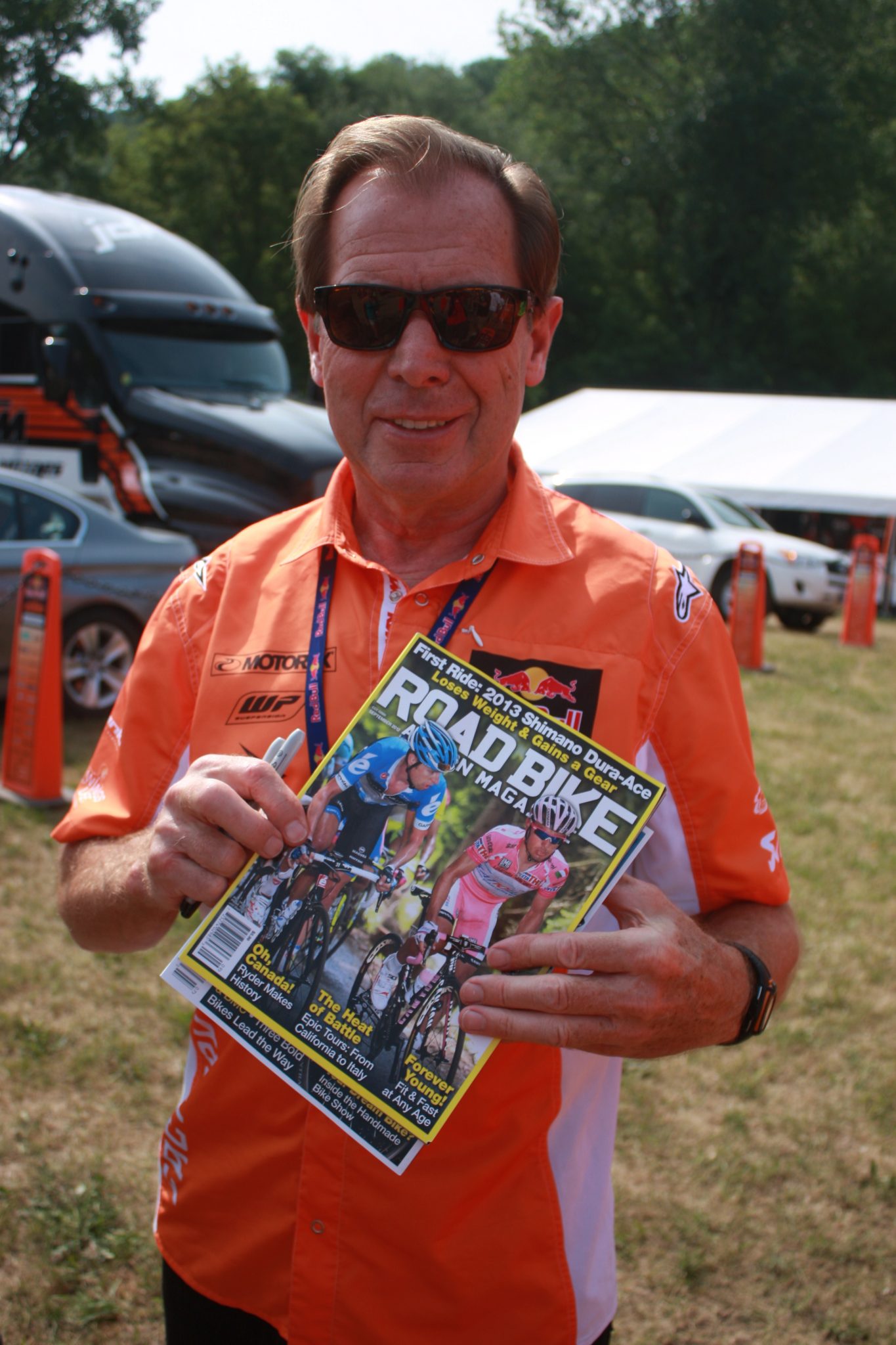 In the last six months I started hearing about a weekly road ride that Roger did, and in my mind, I always dreamed of what it would be like to accompany him some day. I would be lying if I said that it was sheer coincidence days after I received Bud’s letter Roger called me and asked if I wanted to ride with him. In actuality, I had been cajoling my friend Andy, who works with Roger at KTM, to ask about doing the ride. The thing is, I never expected it to happen—and then my phone rang!

At the sound of Roger’s thick accent, my heart rate jumped, and my mind started buzzing as if I’d just been informed that I’d won the lottery. In fact, it was better.

At Roger’s invitation, I, of course, accepted. Although intimidated as I was at the thought of riding alone with the five-time world champion, I asked if Andy could come along for the ride. Roger said yes, and I suddenly had two days to prepare. What was I going to ride? What was I going to wear?

At the time, my first inclination was to ride the Favaloro gravel bike, but being unsure of the ride to come, I figured that the 40mm tires and limited gearing might be a gamble. The only road bike I had available was the Open MIN.D. (RBA, March 2021), which was a great choice, except that one of the minuscule seatpost binder bolts was stripped out. The last thing I needed was to have the saddle start spinning in front of Roger, who was as legendary for his technical and engineering prowess as his racing skills.

Although Troy would’ve heaped a tirade of scorn, I did my best to tighten the remaining (and lightly stripped) bolt the best I could before applying my trusted “Mexican fix” of tightly wrapping the seat tube/clamp junction with duct tape. Perfect!

It was a quintessentially beautiful SoCal day when Andy and I gathered in Roger’s driveway, and we both wondered aloud if the ride Roger had planned was the same as his 70-mile weekly ride he was famous for. Sure enough, when Roger walked up, he confirmed that, yes, we were riding for 70 miles. Gulp! Neither Andy nor I had ridden such a distance in months.

Having spent his whole life developing championship-winning race bikes, in typical DeCoster-style, once he laid eyes on my bike, he started going over it in detail, noticing first the SRAM Flattop chain and wireless derailleurs before calling out the undersized and integrated seat tube.

After he gave the bike his nod of approval, Roger looked at me and asked with an all-too-obvious sense of skepticism, “No arm warmers? No glasses? No computer?”

The first hour of the ride was easy enough as we rolled out towards the coast at a leisurely pace. Roger warned us of an upcoming climb and that he would be going slow since he was “old.” I scoffed, “Yeah, but you’re Roger DeCoster!”

Next thing you know, we were grinding it up the mile-long, 14-percent-grade Harbor View climb. I figured the only reason we were making the climb was to go down the backside and continue our ride. Wrong. Once we made it to the top, Roger just flipped it and back down we went. It was simply a hard, painful climb, and that’s why we rode it.

ROGER TO THE RESCUE

Despite every opportunity we had around mile 40 to hang a right turn and head back to Roger’s house, he just kept his head down and kept pedaling (in the big ring) further away.

The only thing that slowed the pace was when Andy flatted and, lo and behold, none of our spare tubes would accept the valve extender that was necessary for his silly 60mm-deep wheels. Just when Andy was ready to call an Uber, Roger pulled a patch kit out of his bag. Patch kit? Did they still make those?! Of course, leave it to “The Man” to save the day!

As lost as I was within the massive city boundaries of Irvine, as soon as we turned onto Santiago Canyon Road, I knew exactly where we were. It was on this road that a motorcycle playground known as Saddleback Park was once located. Not only had all three of us spent years racing there, but as we rode by the now-abandoned property, Roger told me that he and British MX star Dave Bickers had actually designed the original MX track there back in 1968.

By this time Andy and I were almost out of water, while Roger had yet to finish his first bottle. I asked Andy if he had any of the PowerBar that I had loaned him earlier when he was dragging, and he just looked at me in disbelief. “Well,” he replied, “since I’m about ready to throw up on this climb, yeah, I might.”

“I asked Andy if he had any of the PowerBar that I had loaned him earlier when he was dragging, and he just looked at me in disbelief. ‘Well,’ he replied, ‘since I’m about ready to throw up on this climb, yeah, I might.’”

When I queried Roger how many more climbs we’d have until we got back to his house, he said there were two to come. He lied; it was more like five. As Andy and I struggled, Roger just grinded away, old-school Belgian-style aboard his Eddy Merckx 525.

The day’s best moment came as we sat at a red light; a huge lifted 4×4 truck pulled alongside us, and the driver immediately called out my bike: “Hey, you have the new Open road bike! I have an Open U.P.; how is it?” Just as I started to reply, he looked over my shoulder at Roger and interrupted: “Oh man, look who it is! Wow, is that really him?!”

I laughed in concurrence and said, “Yeah, it’s ‘The Man’ himself.” Just as I often was, this guy, too, was reduced to fan-boy status in remembering what a hero Roger was. I couldn’t help but remind Roger once again, “See, you’re Roger DeCoster.” Roger smiled and said, “Well, that was a long time ago.”

Just as the light turned green, I put my hand on his shoulder to remind him, “No, that’s forever!”

RALLY TAKES IT, CAV MISSES OUT — TOUR OF TURKEY 2021 RESULTS

FROM THROTTLES TO PEDALS & THE DISCOVERY OF CYCLOCROSS