Oh, the stories we weave 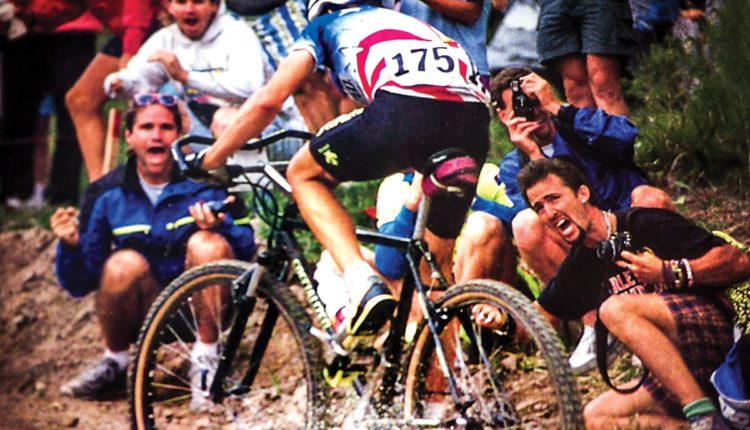 Dropping the camera long enough to cheer on Ned Overend on the last lap at the 1990 UCI World Championships at Durango. Colorado after he finally dropped Thomas Frischknecht.

As far as I was concerned, my 2017 travel season ended in the second week of November with my fourth trip of the year to Europe to attend the annual motorcycle show in Milan. But I was wrong. Here it was, a month later, and once again I found myself passing through the TSA barrier.

Worse, although I had the miles to qualify for platinum status, thanks to Delta’s stupid policy of awarding more miles per dollars spent (on tickets) versus actual miles flown, this unplanned flight would do me no good in the big universe of airline privileges and I’d remain stuck at gold status.

From my aisle seat in row 19, I couldn’t make out a skyline of Manhattan as we landed, but the abundance of heavy winter coats reminded me that I was glad to have not packed lightly. It seemed strange to find myself in the hinterlands of a cold, gray Brooklyn when less than 24 hours previously I was pedaling along, basking in the warm sun at the annual Campagnolo toy-drive ride.

Be all that as it may, I would be in New York for less than 24 hours due to an invitation from Vice Media who flew me in to conduct a short interview on the history of mountain bike racing and the role that former downhill world champion Missy Giove played in it.

Apparently, owing to my three-decade stint as a cycling journo, the guys at Vice figured I would have a first-hand recollection of the events they were looking into. It was gratifying to realize that after all the recent days, weeks, months and years of giving it up to “the kids,” being the “old guy” on the block suddenly had some merit. Nice!

THE GAME
As I Uber’d my way to Brooklyn, I couldn’t help but connect the notion of my being sought out for my first-person perspective of cycling history with those same abilities that made my concurrent reading of Phil Gaimon’s latest book, Draft Animals, all the more relevant. See, it’s all well and good that the cycling world is filled with an abundance of benchwarmers happy to opine on all things they have no firsthand knowledge of. But, in my opinion, it’s never enough just to have something to say; rather, it’s the being-there aspect that lends the most valuable authenticity to the record of history. That’s what made Phil’s book so entertaining to me.

If I had a dollar for every time someone told me I should write a book about all that I’ve witnessed during the decades-long stint I’ve been enjoying in the cycling trenches, I’d probably be blowing dough and getting my car detailed weekly like the ad slime do.

I remember how on my first trip under the employ of Bicycling magazine I traveled to Trek in the winter of 1993 along with two veteran Bicycling editors to see a prototype version of Trek’s radical Y-Bike mountain bike.

As we drove into Madison, one of the first topics that the Bicycling editors boasted about was the money they were making on the side writing for other Rodale titles. Side jobs? Really?!

While they carried on about their extra riches made, I kept mum in the backseat of the minivan wondering only how much potential content was lost for Bicycling while they wrote stories for other mags. That moment proved to be a career lesson for me. No, not on how to game the system to maximize my income, but to ensure that every ounce of my efforts would go not only to the magazine with my name on the masthead, but to the readers who spent the coin expecting the most from it.

STAINED CARPETS AND COBBLES
Like Bob Roll (the sport’s first true storyteller) before him, Phil Gaimon was onto something when he decided to keep notes about his many travails chasing a pro contract. Never a racer myself, my goal has always been to record the wide variety of personalities and technologies that I had the good fortune to witness in person.

I still relish the opportunity to have stood in a dimly lit downstairs condo at the 1990 mountain bike World Championships in Durango, Colorado, watching a flurry of bikes being retro-fitted with a fresh shipment of the then-revolutionary RockShox suspension fork. Try as I might to make company co-founder Paul Turner aware that oil was being spilled all over the carpeting, it didn’t matter to him. For Paul, this was the time and the place for launching his fork, and losing his security deposit was of no importance. It was only after the race—and RockShox-equipped bikes having won numerous rainbow jerseys— that I began to put things into the proper context. It wasn’t just a new fork and it wasn’t just a race. What I had witnessed was mountain bike history as it was being made.

Three years later I found myself once again standing alongside Paul Turner as rigid forks were being ripped off a stable of race bikes and replaced with suspension forks. The difference this time was that we were in a hotel parking lot somewhere in the French countryside and there wasn’t a mountain bike in sight. No, we were there to introduce the concept of suspension to the riders preparing for Paris-Roubaix. Instead of riders like Ned Overend and Greg Herbold, we stood alongside the likes of Johan Museeuw and Gilbert Duclos-Lassalle. The next day Duclos-Lasalle would make more suspension history for RockShox by being the first to ever win the cobbled Classic with suspension.

THE MISSILE
What seemed to impress the guys at Vice when they made a cursory call was the ease with which stories like these flowed. While I couldn’t assure them of 100-percent accuracy, I was at least there to see it all go down. Best of all, the memories were so rich that it felt like they had occurred just a few years ago and not decades.

Like the early days of the sport itself, Missy Giove was a freak of nature that defied easy definition. In a career that spanned from 1990 to 2003, Missy remained a key character who helped nurture the sport along through its formative years. As I described her in a video that The Pro’s Closet made about her last year, “The first impression of Missy would be like taking LSD and having a Jackson Pollock painting come at you at 100 mph and hit you right in the face!” That was the visceral impact of Missy Giove.

CHAPTER BOOKS
As we all know, the sport of cycling is as diverse and wonderful as the roads of the world are long, and luckily there is no shortage of books to read to learn more about it. Unfortunately, these days I know that touting the merits of reading a book is little different from talking up the virtues of downtube-mounted shifters. Still, we’re encouraged that publishers are still attracted to cycling, so on page 18 you’ll find an overview of several cycling books that reflect just a smattering of the wide swath of topics to indulge.

Reading Gaimon’s book took me back to the mid-’90s when I read Team 7-Eleven veteran Bob Roll’s first book, A Ride on the Wild Cycling”. Like Bobke’s book, Gaimon’s Draft Animals is both funny and engaging, and many of the tales he tells are still relevant enough to help fill in the dots of current headlines and controversies.

I remember one day back in the late ’90s when I was driving up into the Santa Cruz Mountains with Ben Capron (current owner of Osmo nutrition) to test-ride some new Specialized mountain bikes when he, too, asked me about writing a book. I admitted that on occasion I did think about it, but that the byproduct of all that I witnessed was always destined for the mag. Sure, a book could be cool, but there was always that next mag deadline to meet that kept it just a passing thought.

What I didn’t tell Ben that day was that I had actually gone so far as to think up a title that I thought best reflected my cherished days in the trenches—“A Front-Row Seat.” I don’t know, it has a certain ring to it, eh?