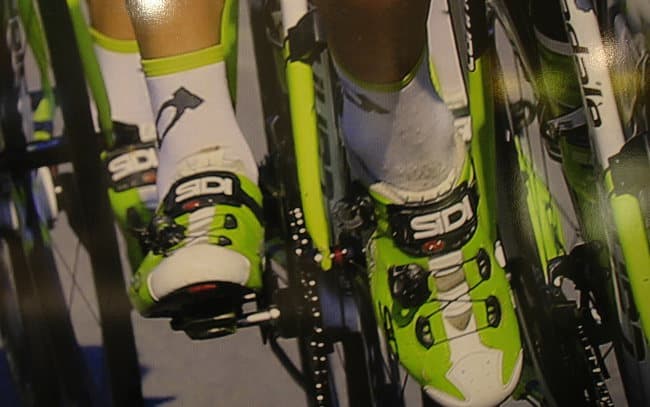 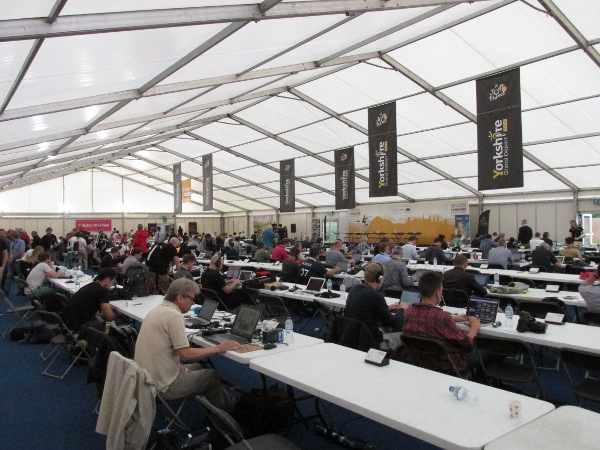 The Tour de France media room – a home away from home – they come in all shapes and sizes and always with varying degrees of service. Here it is Tour de France #8 for me and I still come away with one key tip – don’t leave home without yer ClifBars (preferably white chocolate macadamia nut). 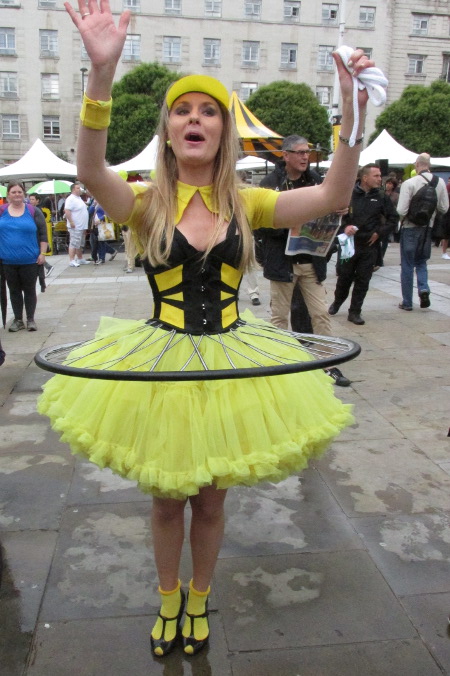 Hey, at least someone was happy to see me at the Tour.

THE UPSIDE OF THE TOUR: TED KING IS IN 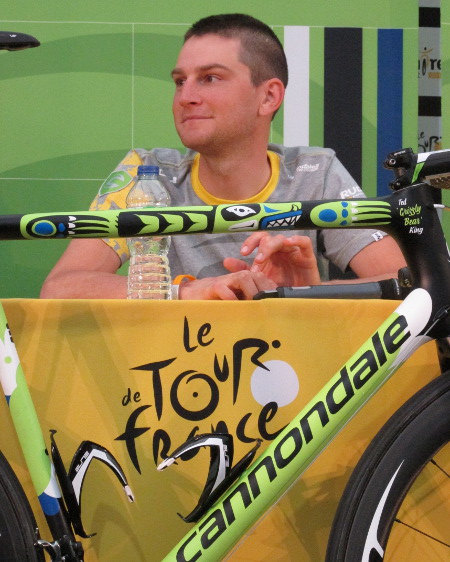 It hopefully says something about Ted King’s status with Team Cannondale that he is the one rider to accompany superstar Slovak rider Peter Sagan to the official team press conference. (Actually, if one is to believe the silly season word on the street, the latest rumor is that Sagan will be taking Ted with him when he transfers to Saxo-Tinkoff next year.)

As most of you might remember, Ted’s was the heartbreak story of the Tour last year when, after  crashed hard on stage two he was booted from the race after he finished outside the time limit on the TTT. Making matter worse, his family had just flown in the night before prepared to spend a week following Ted in his first Tour appearance.

RBA: So what’s the deal with the grizzly bear motif on your bike?
Ted: Well, the idea was to choose an animal that we thought reflected who we are. At first I thought about a lobster since I’m from Maine, but then I thought they get eaten. The grizzly bear is from North America, it’s tall, and they love to eat salmon. I love salmon.

RBA: So what is it like to ride for Peter Sagan?
Ted: It’s an honor to work for him. Peter keeps it fun which helps because there’s always so much pressure to perform well. He won’t crack the whip or scream at us, but we each have an understanding of what’s expected of us. At this level it demands the most from us and he gets that without demanding it.  With Peter, it’s also just great to watch because the bike is like an extension of him.

RBA: So what is the team tactic for the finish?
Ted: My job is to go from kilometer zero to the finish. We don’t have the sprint train that Omega Pharma and Giant have, but that’s where Sagan’s talent lies ? to find holes and still be able to win.

THE DOWNSIDE OF THE TOUR: ALEX DOWSETT IS OUT 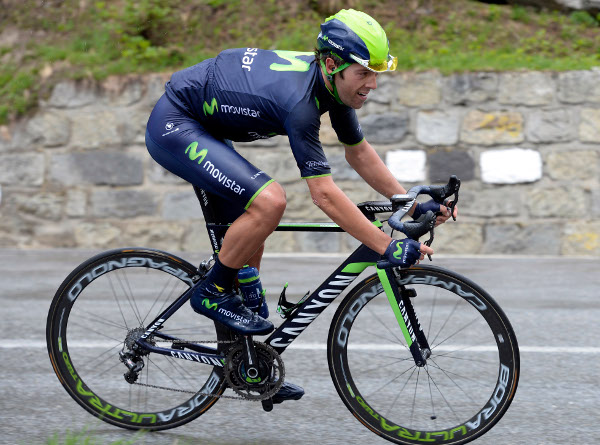 I ran into Movistar rider Alex Dowsett at the launch party for bike sponsor Canyon’s new Aeroad road bike. The friendly 25 year old Brit, was happy to talk about bikes, but he was clearly crestfallen over the recent news that he didn’t make the short list for the Tour.

RBA: What has your riding schedule been prior to the Tour?
Alex: I raced the Swiss Tour and the Nationals.

RBA: So what are your thoughts on the new Aeroad?
Alex: My first ride on the bike came on stage one of the Tour du Swiss. I’ve ridden the earlier version as well because the bike really suits my position well. The new bike is good, it’s stiffer and I think more responsive. With the new model I feel every pedal stroke transmitted into speed, it’s a real step-up. The integrated stem and handlebar interesting, not only has it added more specific front-end stiffness, but it also let me lower my position by just over a centimeter.

RBA: Do riders appreciate the change or would they more prefer the bikes to stay the same?
Alex: It’s different for everyone you know. As for myself, I’m a big Formula One fan so I like the new technology, and I like that Canyon is a brand willing to do the R&D work to make the bikes better. When I look back at bikes like the Lotus TT bike that Chris Boardman used back in the 90’s I think that was the direction bikes needed to go.

RBA: So how did it feel to find out you weren’t getting the call-up for the Tour.
Alex: Honestly, I was gutted. I know there will be other races, but not like this year’s that runs through my hometown. I really feel I was in my best form, but I got a cold in the Switzerland, so now I have to focus on the Commonwealth games. I’m not angry, just disappointed, but we all know that that’s the life of an athlete. I have to say how lovely it has been to see so many people disappointed in my not making the selection.

QUOTE: “The champions fascinate people. The link between the people and the champions is very important.” Tour de France Director, Christian Prudhomme. 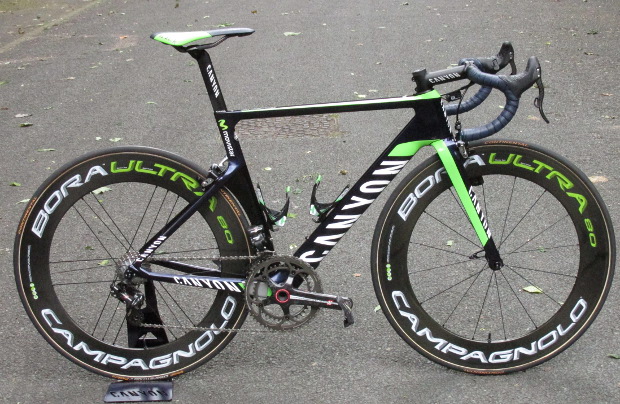 Here’s the new Canyon Aeroad festooned in team Movistar livery. Unlike their Canyon sponsored counterparts at Katusha who are campaigning three of the new bikes in the Tour, the Spanish team opted out of competing on a bike that didn’t arrive until early July. Movistar runs such a tight ship that all the team bike stands had to be re-painted in their official corporate blue color. As for the team riders, their Endura jerseys must run a short zipper so that the Movistar logo is not interrupted when unzipped. 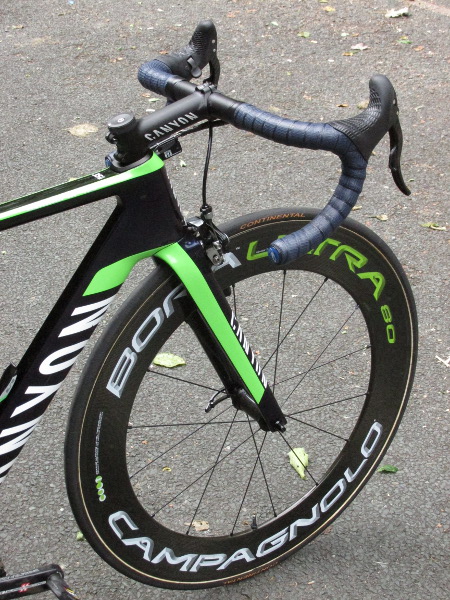 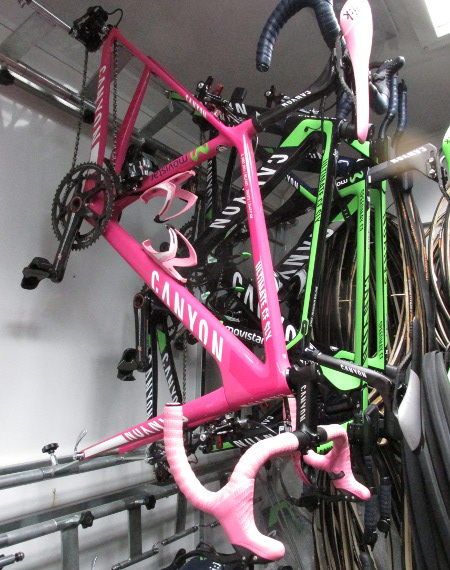 Spotted hanging unceremoniously in the back of the Movistar truck was the ceremonial pink bike ridden by Nairo Quintana on the final day of the Giro d’ Italia. One word – yummy! Canyon’s run of 21 limited edition replica (which sold for close to $16,000) sold out in 48 hours. 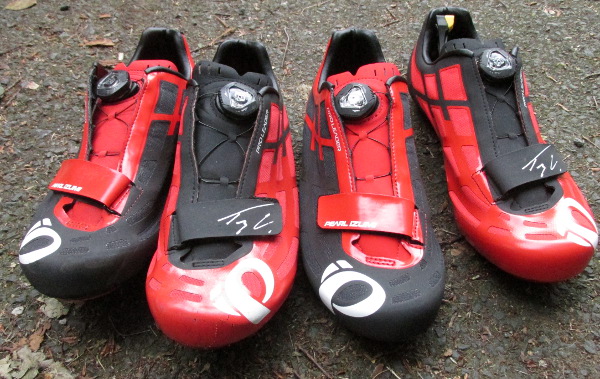 Speaking of limited editions, Pearl Izumi released 200 versions of the limited Tejay van Garderen replica shoe, which apparently, Tejay got at least two pairs for himself. 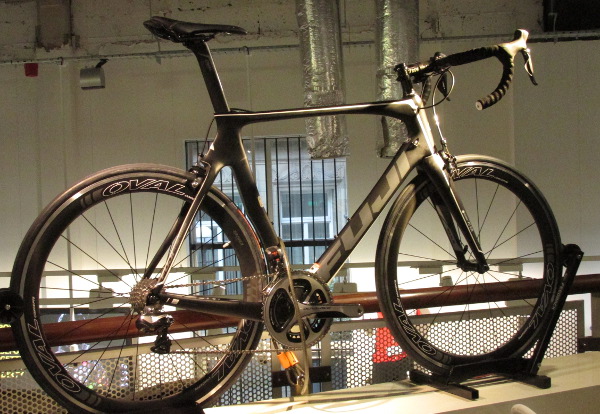 Two years in the making, Fuji took advantage of having the world’s bike press in one place to unveil their new Transonic aero road bike. A full line of bikes will be available later in the year starting at $1750. 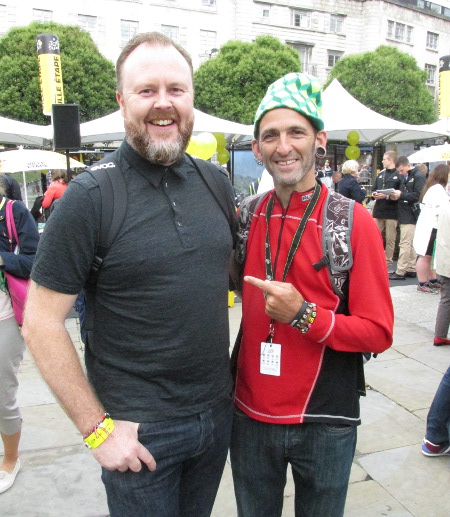 Crazy I know, but this guy walked up to me at the start on stage one and told me that he named his kid after me. Yeah, there’s some poor lad walking around Portsmouth having to explain that his dad was such a loon that he relied on me for a middle name. Wherever you are, Connor Zapata Land, please accept my apologies. 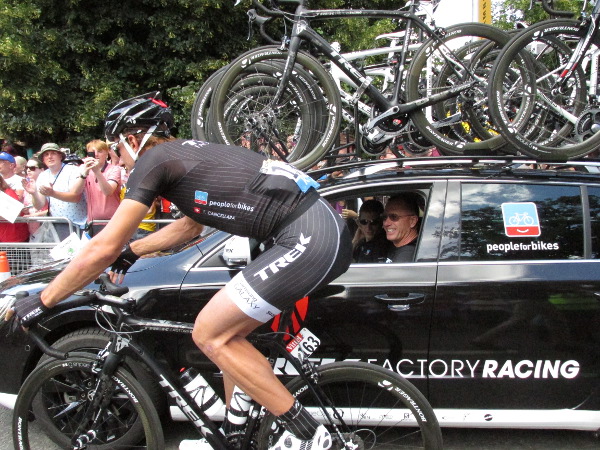 Fabian Cancellara and his Trek Domane ride by his spare bike on the way to the start of stage 3. Trek Factory riders are aboard three different bikes in the race: the new lightweight Emonda, the aero Madone and the suspended Domane. Hey, how about the size of those legs?! 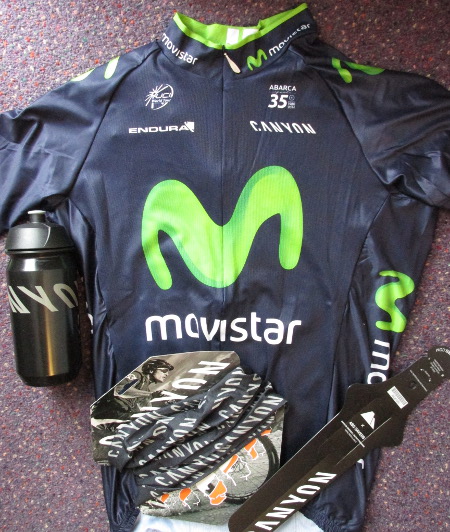 As some of you may recall, Canyon used the run-up to the Tour de France to announce the arrival of their sweet new Aeroad. Well, as we all know, no launch is complete without the customary passing of the schwag – and no passing is complete until I pass it on to a lucky contest winner…and that could be you! I’ll be passing the Canyon musette bag that was filled with a Canyon water bottle, doo-rag, clip-on rear fender, journal and an official team Movistar jersey from Scottish clothing maker Endura. All you need to do is tell me (below):

1. The name of any bike racer (or anyone else for that matter) that you would name your own kid after and why. (And please, all you cynics out there who shudder at the thought, don’t waste my time telling us so, this is just a contest to give away some free stuff).

2. The one rider who has impressed you most in the Tour so far and why?

Thanks for reading & playing along. Look for more schwag contests soon.