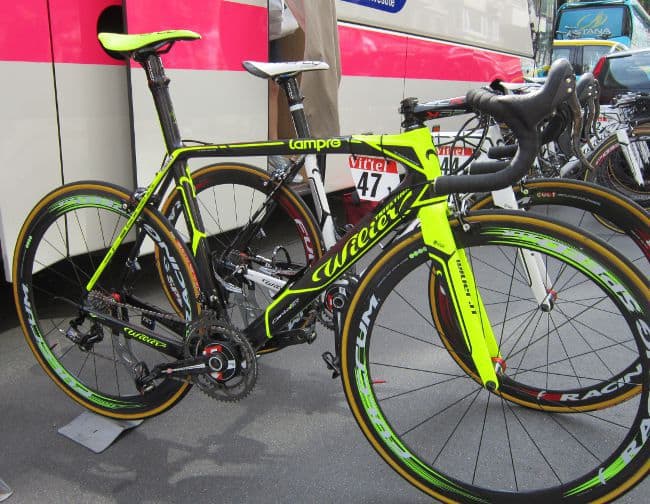 I originally posted this tech gallery from France on July 1, 2012 and I have to say that as I watch the Tour de France today,  I still marvel how both how much the technology has changed  in the last decade, and how much it hasn’t.  To see where some brands have gone in the last ten years – and some, like American Classic that literally are gone, it’s all a fabulous marvel.

The Tour de France has of course become the priority debut for new race bikes and this Wilier rolled out it’s latest version of their beautiful Cento 1. The new frame now features revised top tube/headtube/downtube configuration to increase stiffness, a tapered headtube, and asymmetrical stays as well as much more detail work featuring better fork/frame integration and cleaner cable routing (with electronic cables in mind) and a replaceable dropout ? not just a derailleur hanger. 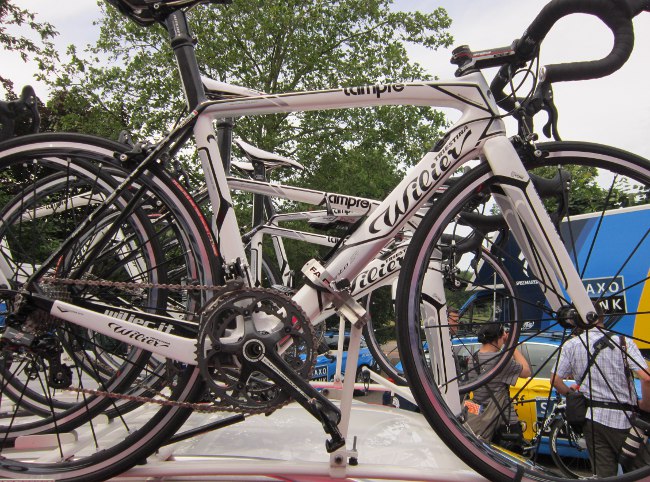 While Team leader Alessandro Petacchi’s bike maintained the special paint with neon highlights, the rest of the Lampre team were aboard these white/black versions. Wilier claims that the new Cento also has geometry more in common with the Zero7 than with the previous Cento1. Notice too the Kamm tail fork and ISP shaping, based on the Twinfoil aero design of their radical Twinfoil TT bike. The frameset price should be $3999 with a complete bike featuring a Campagnolo Chorus drivetrain at $5599. For more info, Wilier Bicycles. 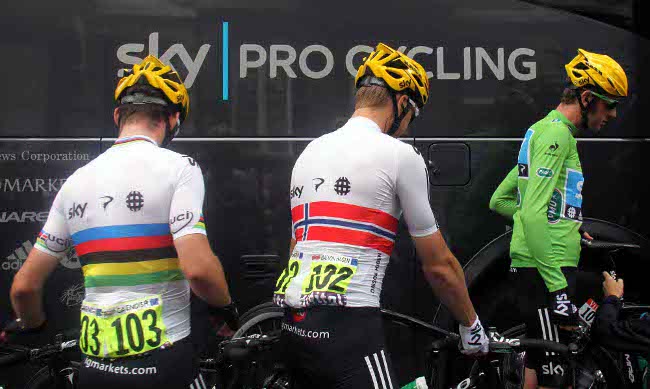 Heads were turning at the start of stage one when the entire Sky team took the stage at sign-in and wearing yellow helmets.  Yellow of course is the color reserved for the leader of the race, but in their infinite wisdom, Tour organizers decided to enforce a new rule – based on the fashion of 25 years ago – that the leading team all wear yellow helmets as well. The move was universally disliked by many in the bike industry and just another silly encroachment on team and team sponsor independence. We tracked down Specialized’s Sean Estes to get some background on the change.

RBA: What was required from ASO?
Sean: The ASO announced a new requirement where whichever team currently leads the team classification they are to have all its riders wear yellow helmets – this is a throwback to days before helmets were around when the leading team’s riders would wear yellow cycling caps.

RBA: What kind of timing did you have?
Sean: It was about April when we first learned of this new rule.

RBA: How many helmets for all the teams were needed?
Sean: We have 4 teams in The Tour on our helmets (Omega Pharma Quickstep, Saxo Bank, Astana and Lampre) so we needed about 80-100 total yellow helmets. We had to produce a few extras because given the lead time to manufacture the helmets the starting list for each team was not yet confirmed at that time so we had to pad the order a little.

BACK TO PIT ROW 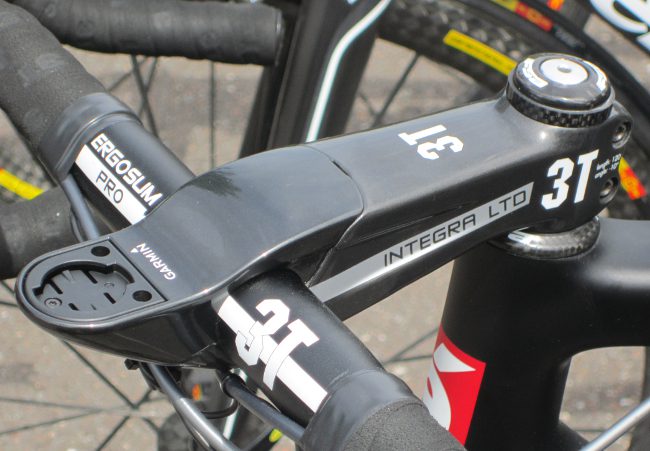 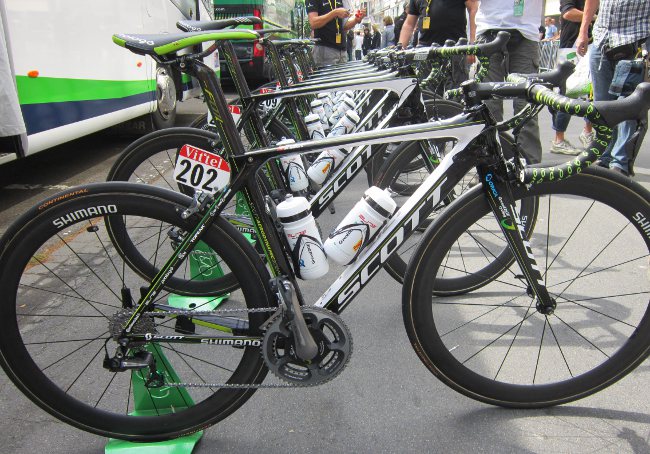 Here’s the stable of Scott FO1 team bikes for the Orica-GreenEdge team. 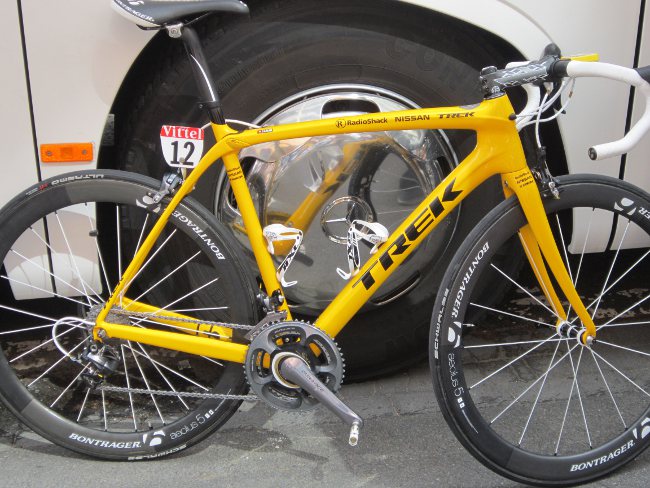 After the hopeful, but ultimately disappointing launch of the bike at the Tour of Flanders when Fabian Cancellara crashed and broke his collarbone, Trek got a second (and much improved) opportunity to hype the “rear suspension” of their Domane on stage one.

And speaking of Cancellara’s Tour record, the powerful Swiss rider has now worn the yellow jersey for 22 days in his career, equaling the marks of other Tour greats, including two-time winner Laurent Fignon of France, American triple champion Greg LeMond, and Dutchman Joop Zoetemelk. All of Cancellara’s prologue victories have been outside France. 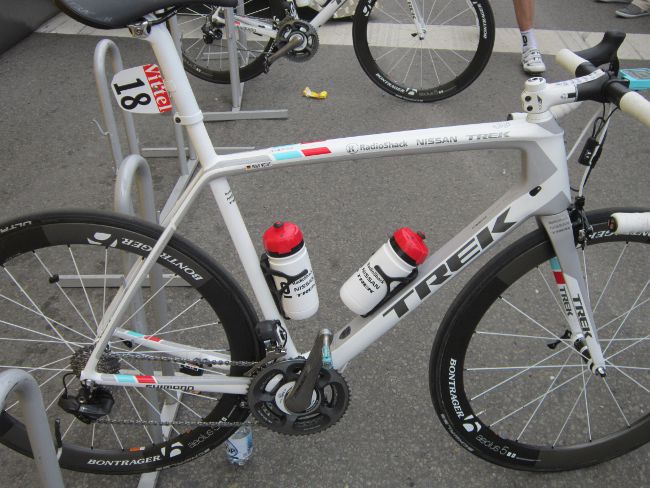 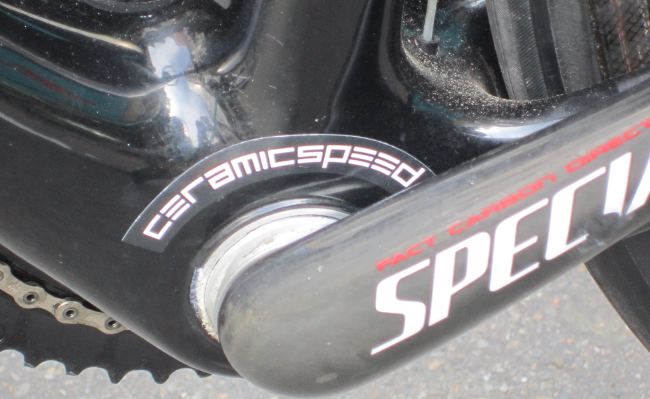 The sticker says it all – special ceramic bearings and a smoother spin from Ceramic Speed. 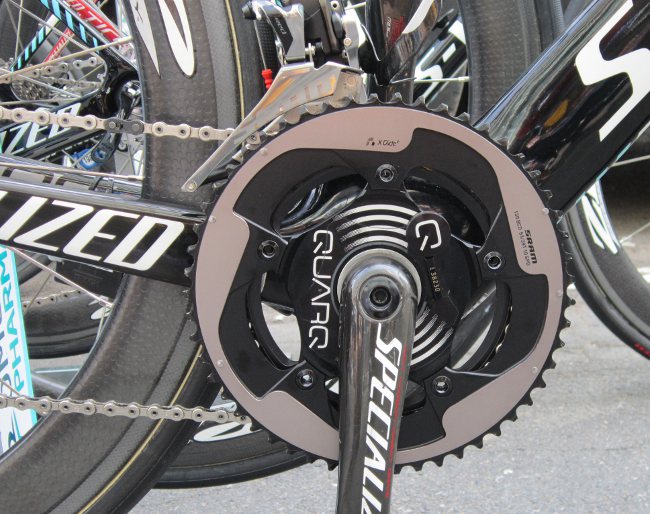 One good thing for the folks from Quarq power meter is that following their purchase by SRAM, they are now a player in the Tour de France for the first time. 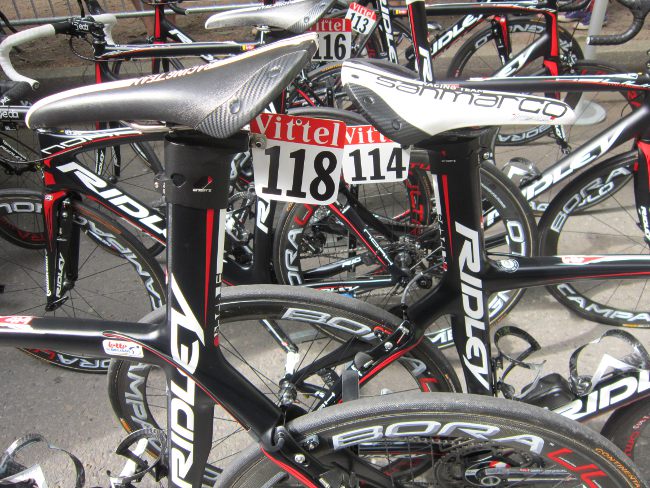 Selle San Marco has a long and strong history in the sport. For the 2012 Tour they are the team spec saddle for the Lotto Belisol squad, Vaconsoleil, Lampre and AG2R. 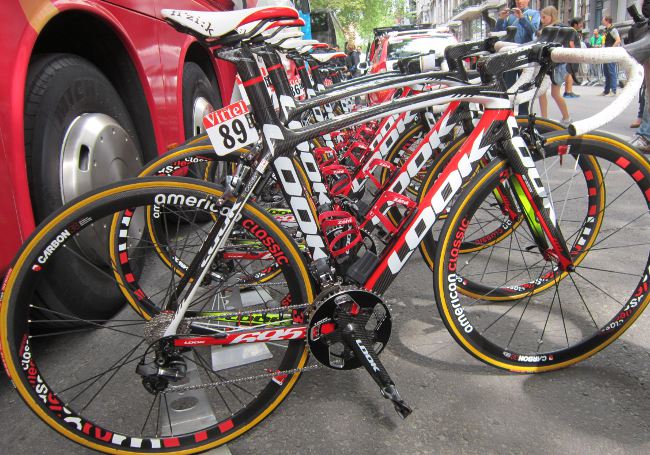 The French Team Cofidis rolled out a slew of the latest French made Look 695s that somewhat ironically use American Classic wheels. 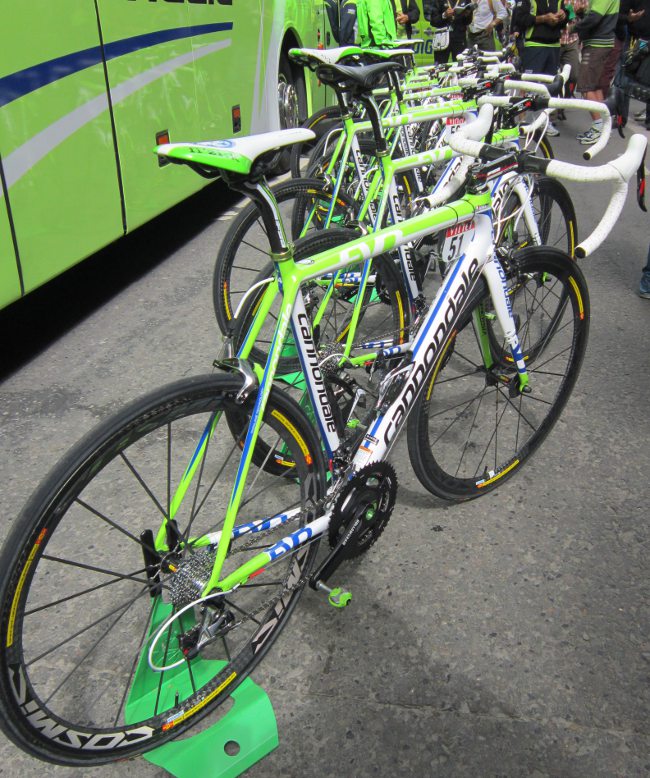 With long-time team sponsor Liquigas reported to be disappearing following the 2012 season, many people are wondering who might take the place of one of the sports most popular and winning teams…of course, people are also wondering…. 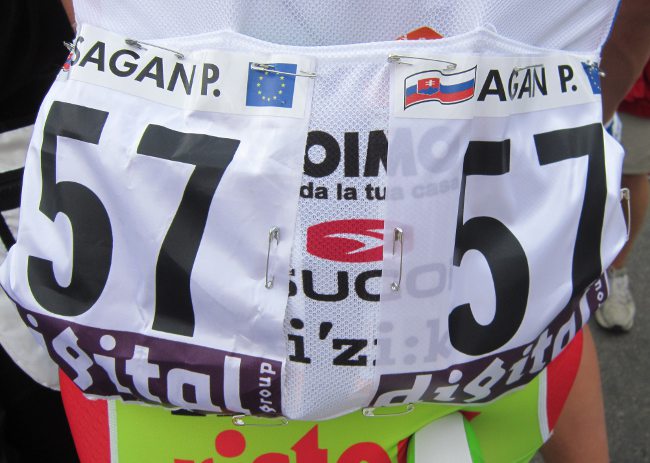 You’ve got this guy on your team and you’re going away!??!?! Stage one winner: Peter Sagan.

A MOMENT IN TIME, 2013: PETER SAGAN GETS BUSTED