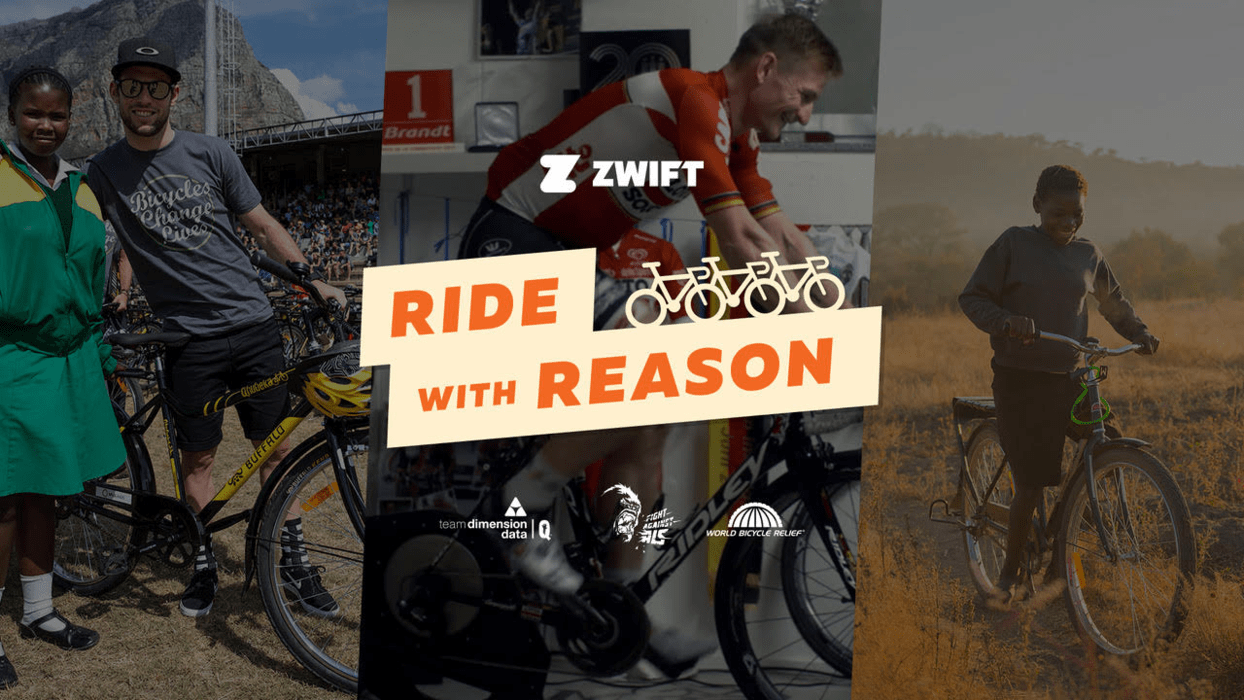 Zwift, the global online fitness platform for cyclists, is hosting three premier charity events for riders around the globe. Zwifters will get a chance to ride with the pro peloton’s most notable riders, including Mark Cavendish, Andre Greipel, Marcel Kittel, Thomas De Gendt, and Jens Voigt in support of a better, healthier world.

Starting November 12th, Germany’s Andre Greipel (Lotto–Soudal), one of the most prolific sprinters in the sport, will lead a three-ride series of Zwift’s new Group Workouts in support of ALS research at Rostock University. Greipel’s mother is currently suffering from the degenerative brain disease ALS, or Lou Gehrig’s Disease, and he’s passionate about supporting their efforts to fight this debilitating disease.

Each workout will specialize in a particular aspect of pro cycling and will be led by a pro who specializes in that aspect. Expect sprint workouts with Marcel Kittel (Quick-Step Floors), breakaway workouts with Thomas de Gendt (Lotto-Soudal), and more from riders across the sport.

“Obviously, this cause is close to my heart and I want to help anyone suffering from this terrible disease,” says Greipel. “Through this event, I can raise awareness of ALS by connecting with thousands of cyclists around the world, while we raise money to drive research.”

Funds will be raised through donations at andregreipel.de/en/fight-als_en.

Immediately afterward, Team Dimension Data for Qhubeka is opening up their training camp to all Zwifters with 19 group rides and group workouts during the week of November 13-19 in support of Qhubeka. Deemed “the world’s largest training camp,” Team Dimension Data riders like Mark Cavendish, Edvald Boasson Hagen, and Steve Cummings will lead rides with the goal of funding 500 Qhubeka Bikes to be distributed throughout South Africa in order to bring people in rural communities closer to healthcare, jobs, and education.

One of the most popular charity events in Zwift is the Ride On for World Bicycle Relief (WBR), taking place this year on December 2nd with thousands of cyclists riding as long as they’d like within a 24-hour period with pro cyclists like Jens Voigt, Fumiyuki Beppu (Trek-Sagafredo), Laurens Ten Dam (Sunweb), Lawson Craddock (Cannondale-Drapac), and Greg Henderson (USA Cycling). Past iterations of this event have raised hundreds of thousands of dollars in donations and matching funds from bike industry brands like Trek and CycleOps and the goals for this year are similarly ambitious. By creating the world’s largest online cycling community, WBR and Zwift hope to raise a quarter million dollars and crush 1,000,000 miles to empower students, healthcare workers, and entrepreneurs through the power of the bicycle across all of in rural Africa. If participating riders can reach 1,000,000 miles, Trek Bicycles will donate an additional $40,000 to WBR.

Zwifters participating in the Ride On for World Bicycle Relief will automatically sport WBR gear in Zwift to show their support. Participants can donate, setup their own fundraising campaign, or join a fundraising team at zwift.com/ride-with-reason.

“When an entire community comes together, it can really make a difference,“ says Eric Min, co-founder and CEO of Zwift. “Zwifters are some of the most generous and open-hearted people I’ve met and that our platform can be the way we bring together this global community makes us feel, honored we can play that part.”