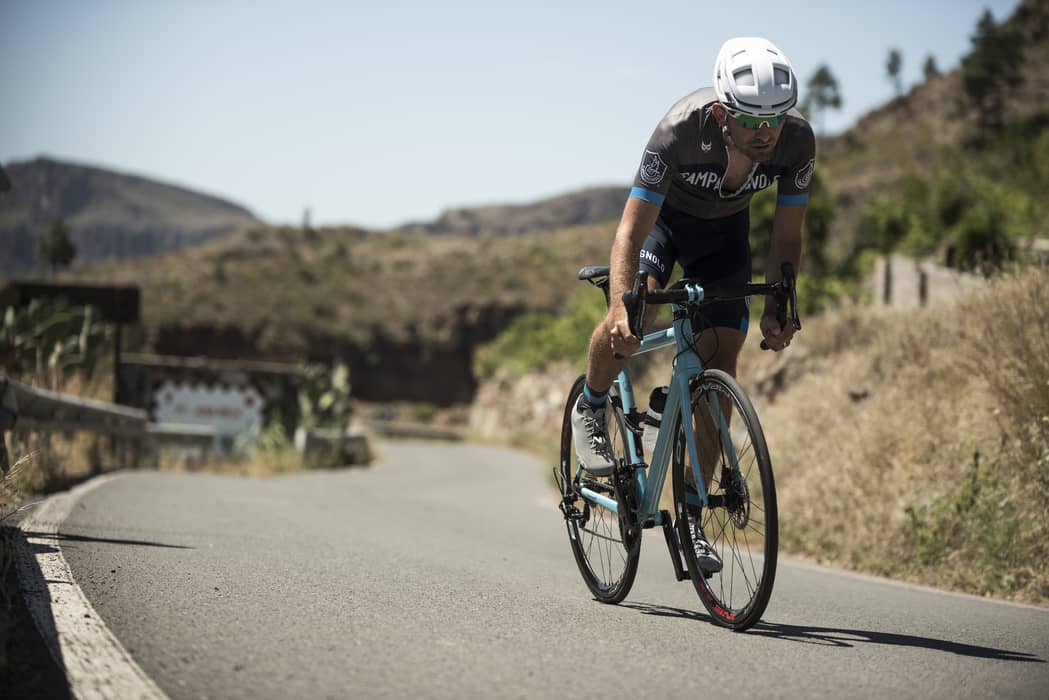 One year ago Campagnolo invited us to a three-day new-product launch in Gran Canaria (RBA, July ’16) where they showcased their new Potenza component group. At the time, it seemed like the trip of a lifetime. So, imagine our surprise when a new invite appeared, welcoming us back to the island that sits off the coast of North Africa. More new product, more great riding—bring it!

In typical fashion, Campy would neither deny nor confirm what we were headed to the far-away island to see. The Italians have always been good at keeping their launch plans a secret, but we did have a pretty good idea, and it rhymed with “disc brakes.”

Although we’ve seen the Campy disc brake in public for the last year, this would be the first time any outsiders were given the chance to ride them. In the give-and-take game of product development, Campy is well aware that being the first in production is not always possible, nor is it always a benefit. So yes, despite their development being a bit slower than their competition, as one Campy spokesman said, “Campagnolo quality takes time, and there’s no reason to rush to market at the price of our customers’ satisfaction and safety.”

The big news from Campagnolo is that from their entry-level Potenza gruppo to the uber-high-end Super Record kit, they are making hydraulic disc brakes available across their entire component line. Disc brakes may indeed be the future, but owing to their legion of loyal traditionalists, Campagnolo will, of course, continue to offer their components with rim brakes as well.

The new offerings share most of their technology—from internals to ergonomics, with the large differences being materials used in construction. There are truly only three shifter options. The EPS and the mechanical-shift version with the carbon brake lever are made at a quality and material spec of Super Record but pair with Record and Chorus seamlessly. The Potenza offering will have the same ergonomics but with Potenza-specific internals and an alloy brake lever. 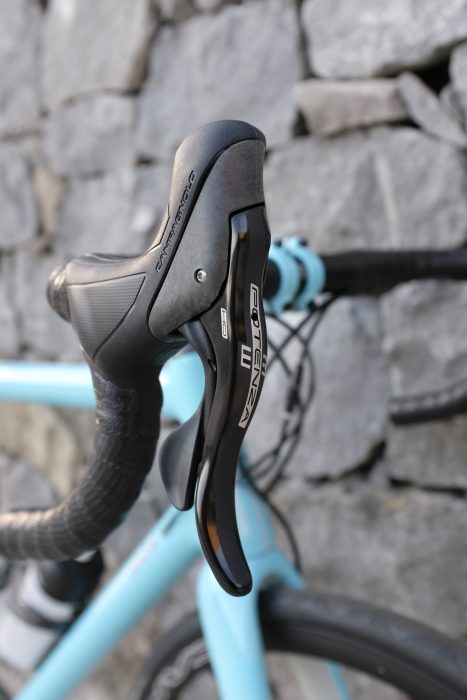 Although the brakes are 100 percent Campagnolo-designed, we were told that there were early-on discussions about general disc brake technology with the German brake-maker Magura. Unlike Shimano and SRAM, Campy is not offering adapters to a one-size-fits-all rotor form, but instead only offering a flat-mount 160 caliper for the front. In the rear, the customer can choose if they want the 140- or 160mm flat-mount caliper. Because of this size-specific design, the calipers have a different look than we have seen from the competition. Campy claims with these specific and purpose-built calipers, there is less chance of failure, easier adjustment, tighter tolerances and less weight.

Typifying Campy’s tradition of chasing precision-built parts, it was only after extensive testing and research that Campy found that disc brake bikes all had one thing in common—they changed the traditional chain line, which could slightly compromise the precision of the shifting on the extreme ends of the cassette. So, they have designed the new H11 crank that, while not altering the Q-factor of 145.5mm used on their standard cranks (using rim brakes), corrects the chain line with a different offset. The H11 crank is equivalent to the Super Record crank in material and build, but will now improve the shifting and consistency when used on bikes with disc bikes. 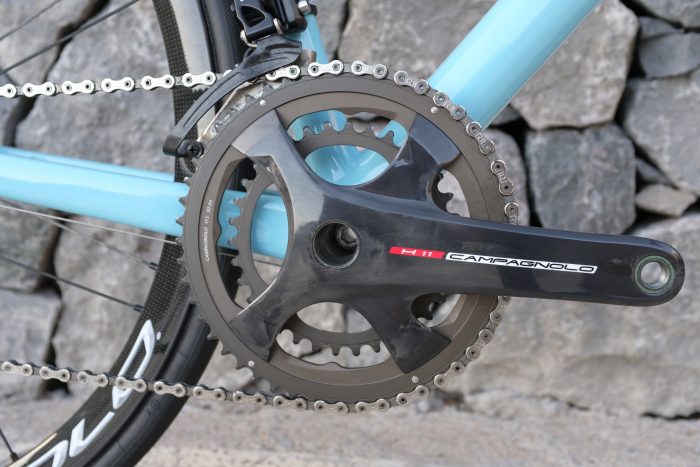 In addition to all their work on developing the new brakes and lever assemblies, Campy has also been hard at work designing wheel systems specifically to work in accordance with the added forces of disc brakes. After test data showed that under braking the front wheel incurs similar forces that the drive side of the rear wheel does during accelerations, they designed a wheel that, for the first time, uses their own G3 pattern on a front wheel.

The two wheels on display were the Bora One DB and the Shamal Ultra DB two-way fit. The Bora will come as a clincher and a tubular in 35mm depth and a 50mm tubular. The name has been a staple for Campy, and now the disc brake version features an all-new carbon rim built specifically for disc brake use. While some of the rim material was changed and minimized from the brake track, the nipple beds were reinforced to handle the increased load from the braking power.

The new Shamal Ultra DB carries over much of the same technologies, but in an alloy rim package. The front rim is 27mm deep while the rear is 30mm deep, and both use the MoMag construction, which means no holes in the tire bed. The hubs also use the AFS rotor mount, while the front has a carbon center shell and oversized alloy flange on the brake side. In the rear the whole hub is alloy, and both the front and rear have USB ceramic bearings. 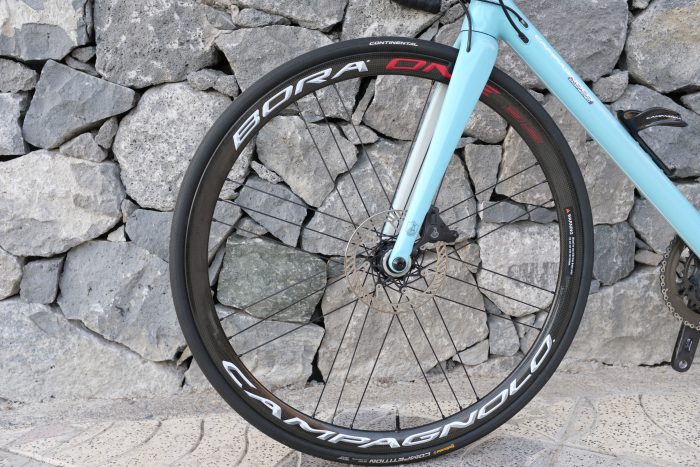 The best thing about the volcanic island is that you’ll be hard-pressed to find any road that is flat for more than a mile or two. Everything is either up or down, so what better place to put disc brakes to the test? We flipped through the gears on the coastline rollers and tested the brakes on a few of the small city roundabouts that were buzzing with flocks of Euro tourists.

Finally, we found our way to a steady climb that progressively traversed the scenic mountainside until we topped out at a tall peak that offered a spectacular view of the island. Knowing that the only way to get back to the hotel was riding down a 28-mile descent had all of us panting with anticipation. 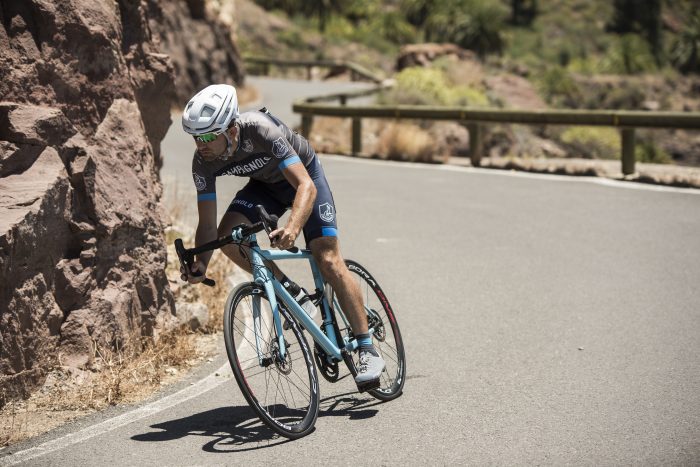 After less than a mile down the many switchback turns, I found the modulation and power of the Campy disc brakes to be outstanding. The transition has no on/off feeling, but rather an intuitive progression of power. After such a long run down the mountain with countless tight turns and long braking sections, I never felt the slightest bit of hand fatigue or finger soreness. Not only did the brakes supply more than enough power to slow only inches before a hairpin, but they also let me easily scrub little bits of speed with only the gentlest of pulls on the lever.

We were on the mechanical-shift version, and the shifting was as you would expect from Campy. There is no difference in the feel of the shift, and for those that have fallen in love with that secure shift feeling you get with every click of the Campy lever, you will love this too. The sounds and feelings of independent controls are unlike any of their competition, and it’s no wonder they have for so long been renowned as the pinnacle of cycling’s drivetrain.

It was almost 100 years ago that company founder Tullio Campagnolo invented the quick release, and ever since, the component company he created has sought to push the road market to the ever-evolving levels of high performance. They might not have been the first to play with disc brakes, but their effort proved impressive. While I thought the quality and aesthetics were unmatched by the competition, better still was the performance.
I came away highly impressed with the modulation and level of instinctive control. I was never able to not get just the right amount of brake that I needed. Even in the most unexpected and demanding of situations, the brakes never felt underpowered, nor did they ever need to be locked up with too much brake.

From shifting and braking to rolling on the new wheels, the entire package was outstanding, and I left giddy in anticipation of riding the new parts on the local roads back home that I know so well.

And last, in addition to the brakes and wheels, Campy also used the launch to show off an all-new, entry-level 11-speed Centaur group to combat the likes of the Shimano 105 and SRAM Rival. Look for more on the release of those new parts in an upcoming issue.

For more info go to www.campagnolo.com

WILL SHORTER CRANKS MAKE YOU FASTER?